A challenging but enjoyable day's cycling from Agua Azul to Palenque in Chiapas, Mexico. Here's my travel blog from the day's ride.

Don't get me wrong, today was a tough day of cycling, but at the same time, both relaxing and enjoyable.

We'd stayed the night at a small Posada after visiting Agua Azul waterfall so were rested which was a bonus!

Oliver and I had to cycle 4 kms back uphill to the main road, which was pretty steep, but from there, it was a swift 10kms or so to Agua Clara.

Once at Agua Clara, we cycled down to the river, and spent a few hours there relaxing and swimming. 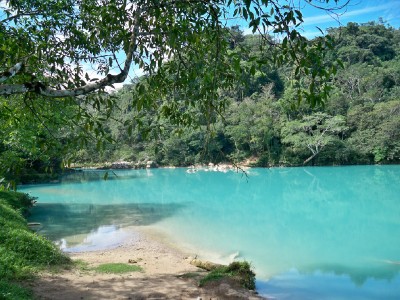 Oliver is a great guy, and we chatted about previous journeys, his life in Berlin, and numerous other things.

He works making clothes with his wife and selling them on a market – Their website is here at www.modewerkstatt-seidel.de . So, pay it a visit and get in touch with them if you happen to be in Berlin !!

As we were chatting, a guy who worked at Agua Clara came over and it seemed that we all spoke about the same level of Spanish!

Asking if there were crocodiles in the water he said no, only alligators further downstream. So that was alright then. 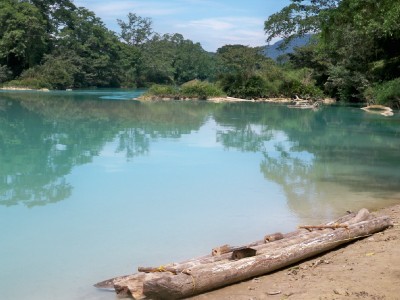 Cycling to Palenque in Mexico

After a bit of a swim, came the tough part of the day as we cycled to Palenque.

The rolling hills were quite tiring after the previous couple of days of cycling, and we eventually rolled into Palenque for after 17.00.

We found a pretty good hotel which ended up costing us each 125 pesos for the night, and had a good meal out at a restaurant. The plan was to take a day off, and spend some time at the archaeological site of Palenque the next day.