Last Updated On April 7, 2021 by Dave Briggs Leave a Comment

Our experiences exploring Athens on two wheels with Athens By Bike. How to see Athens the fun way by bicycle, on a half day sightseeing ride. 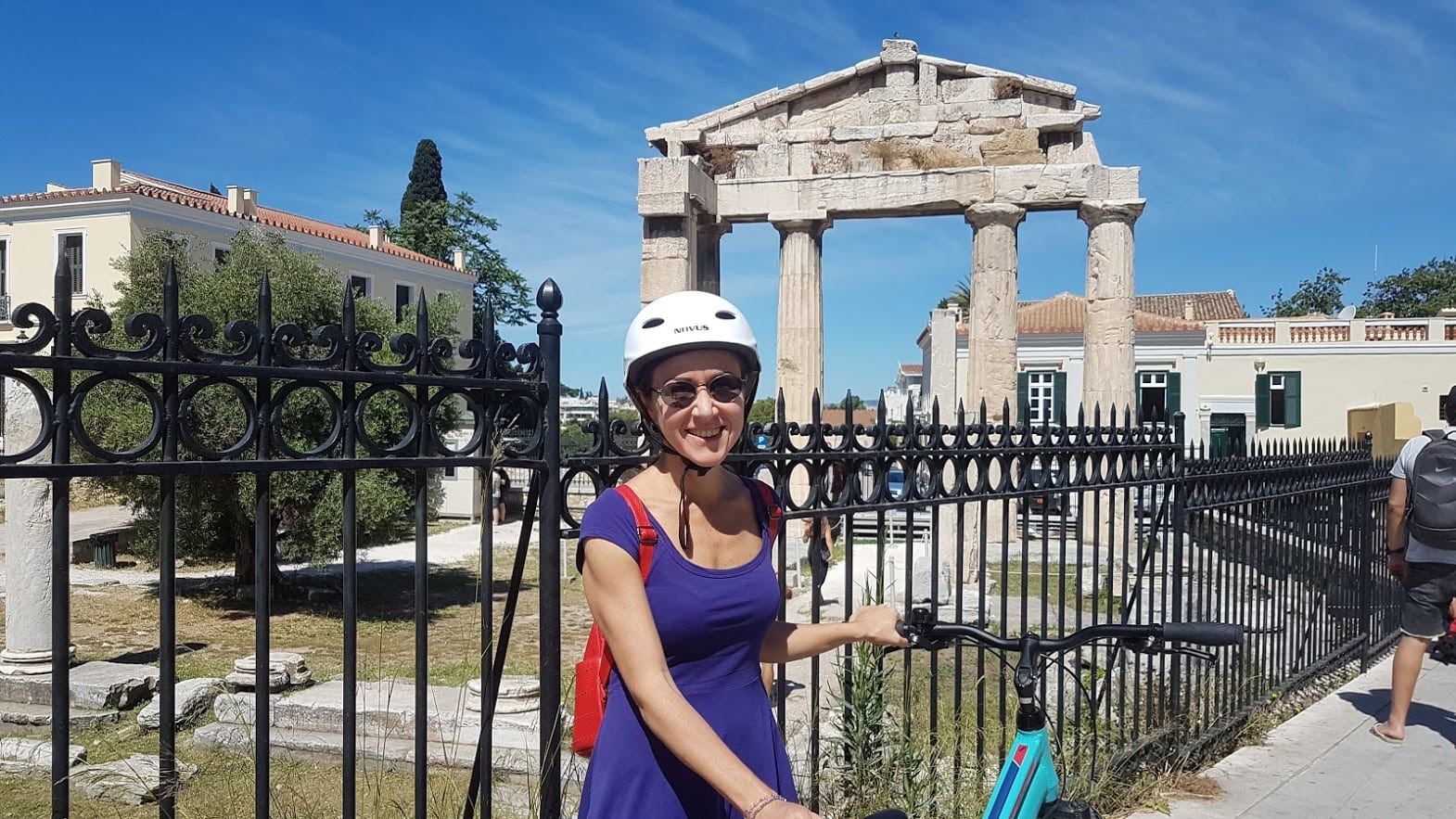 A Bike Tour of Athens

I've always felt that a bike tour is the perfect way to orientate yourself in a new city you plan to spend time in. It gives you a chance to get your bearings, spot places you want to return to later, and get some inside knowledge from a local guide.

So, although I've been living in Athens for several years, I jumped at the chance when asked by Athens by Bike to try one of their tours.

It would give me the opportunity to write about the experience so you can see if an Athens bike tour is good for you. It would also be a chance to persuade Vanessa to get on a bicycle in Athens.

As a result, she'd also only cycled a couple of times in the last 15 years, one of those being during our trip through Asia on the quiet island of Koh Jum.

She would be the perfect person to say if the bike tour of Athens was suitable for people of all abilities. So perfect in fact, that the rest of the article is written by her! 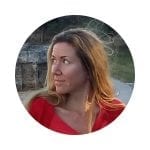 Like many Greeks I know, I used to cycle a lot when I was a child. In fact, this was mostly during our three-month-long summer school holidays – Greek kids are very spoilt!

During the summers, we were based on the coast close to Athens. It was easy and safe to cycle around, as there were very few cars in the area.

How about cycling around Athens though? No way – most Athenians would say it’s crazy, even though half of them may ride scooters or motorcycles.

Bike Athens – Is it really viable?

I have to confess that, in my head, cycling in Athens is pure madness. I absolutely love walking around my city, but I was not convinced that an Athens bike tour is a smart idea.

And then, Dave announced that we had been invited to join one of the “Athens by bike” tours, organized by a company specializing in, well, guided bicycle tours in Athens. Whoops!

Although I was more than happy to cycle around Koh Jum in Thailand and Inle Lake in Myanmar during our recent trip to Asia, I realized that an Athens bike tour felt, well, a little outside my comfort zone.

At the same time, I was really, really curious to check it out, and see if it’s really feasible to cycle around central Athens and feel safe at the same time.

We arrived at the meeting point at 9.10, and were greeted by Manos, the mastermind behind “Athens by bike”. He said that there were 24 people signed up for a cycling tour of Athens that day, and so there would be 3 different groups.

Our group for the Athens bike tour had eight more people – two couples, and a mother with three young children. I felt a lot better – if a kid can do it, I can do it! So yes, the biking tour in Athens is family friendly as well. 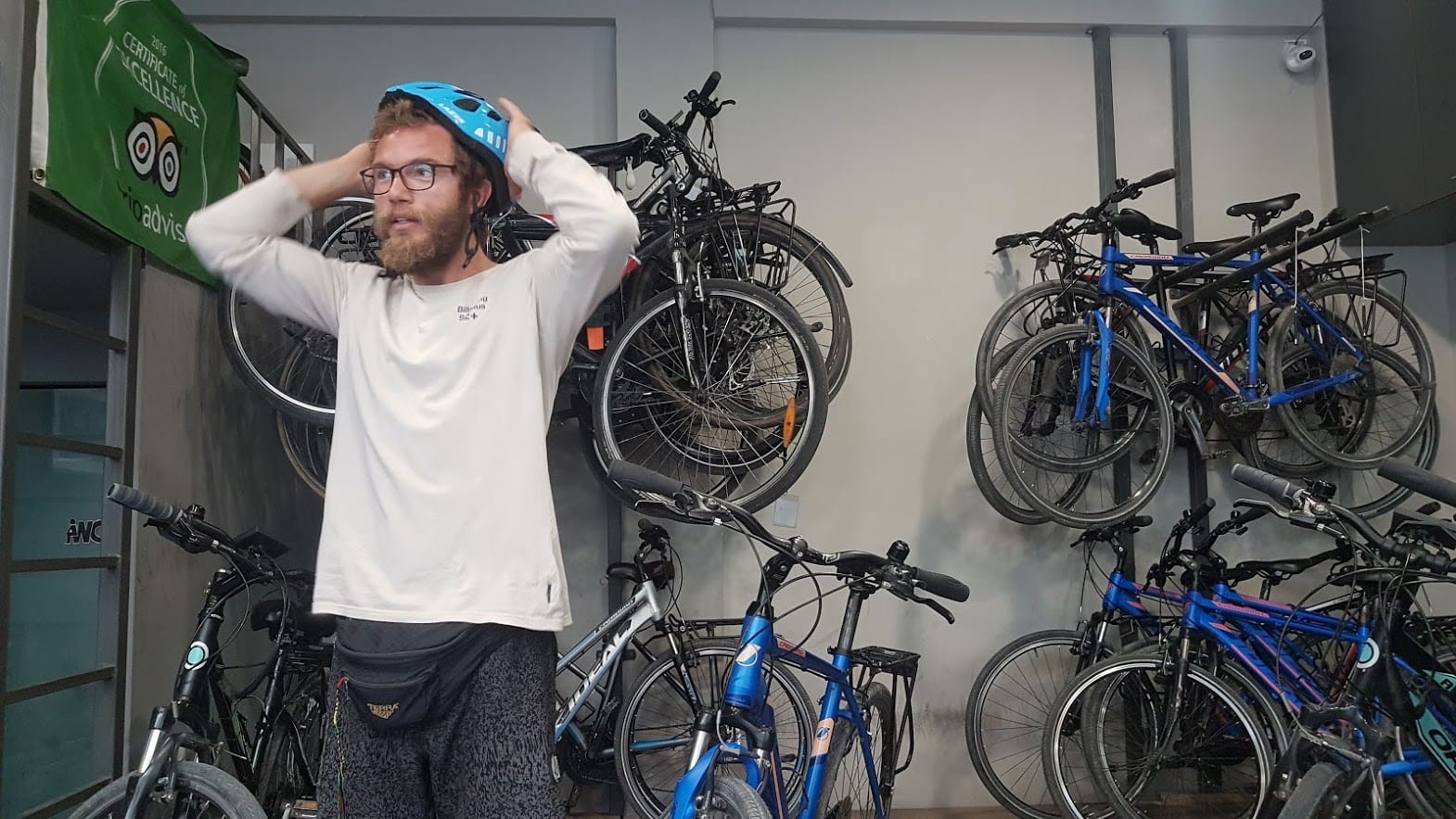 Dimitris, our tour leader for the duration of our half-day bike tour, stood out immediately – not only because of his unusual hair which he was quick to point out, but also because of his charming and funny personality. We also briefly met two other guides, who were going to take around two more groups.

First things first, and Dimitris gave us a thorough briefing on safety. He explained how to fit the cycling helmets on, and showed us how to use the brakes and change gears on the bike.

He also told us a little bit about the route and the logistics of the day. The total route was going to be around 9 kms and cover much of central Athens, while there was also going to be a break for ice cream. 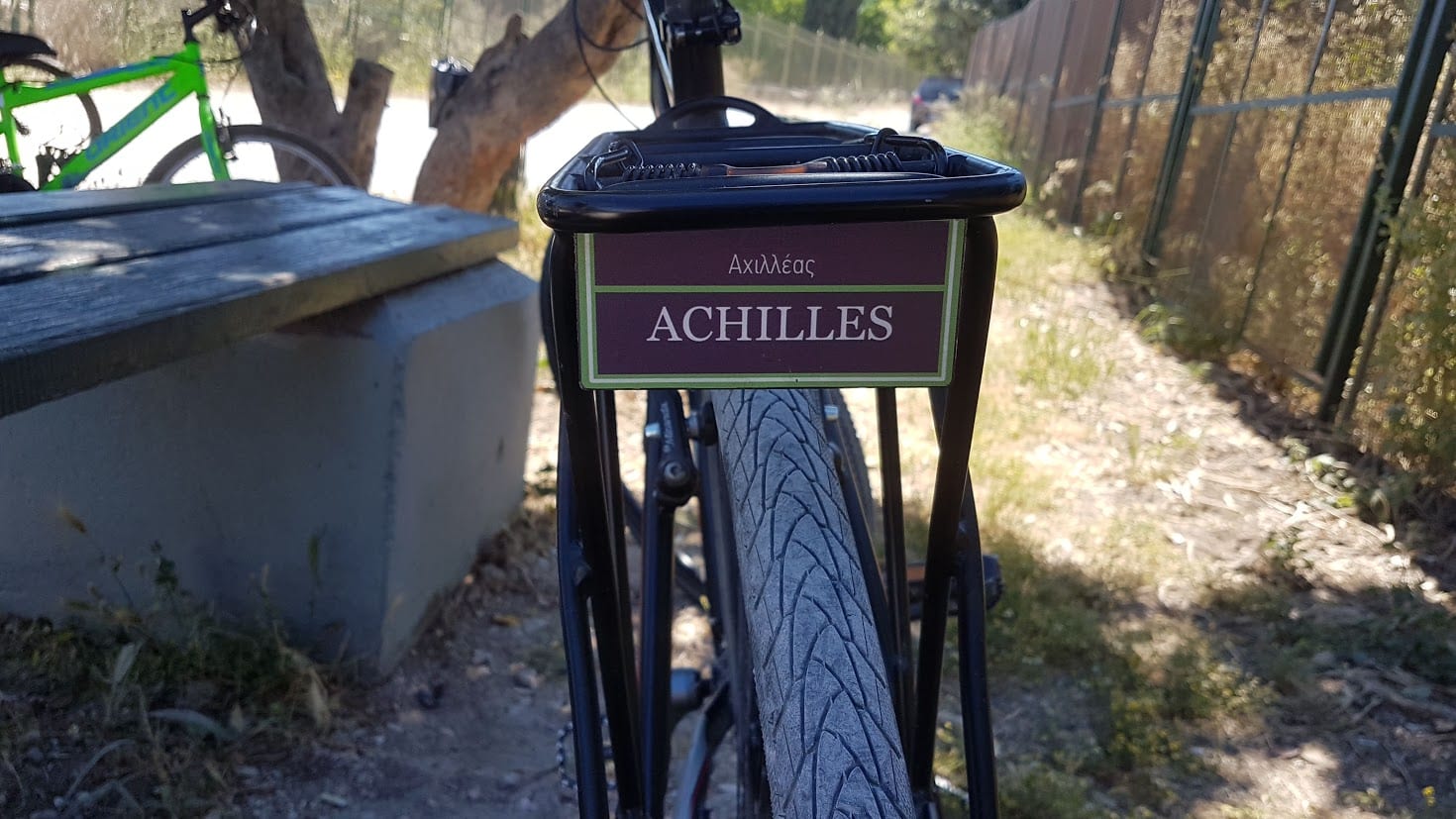 We were then assigned our bicycles, each named after someone from ancient Greek mythology. My Athens bike for the day was Demetra, the goddess of agriculture, harvest and grains, while Dave got Achilles. Depending on your gender, you could ask for a bike named Pythagoras, Echo, or even Agape! 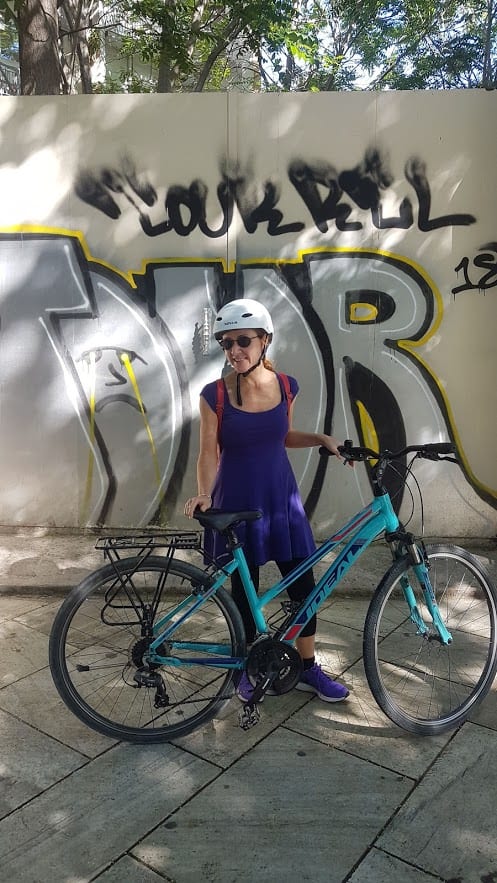 Getting around Athens on a bike

And off we went! Our itinerary took us around much of central Athens, passing by most of the important sites and landmarks of Athens, as well as some places often overlooked by tourists.

And even better, most of the route was traffic free. This came as a pleasant surprise and made the Athens by bike tour so much more relaxing for me. 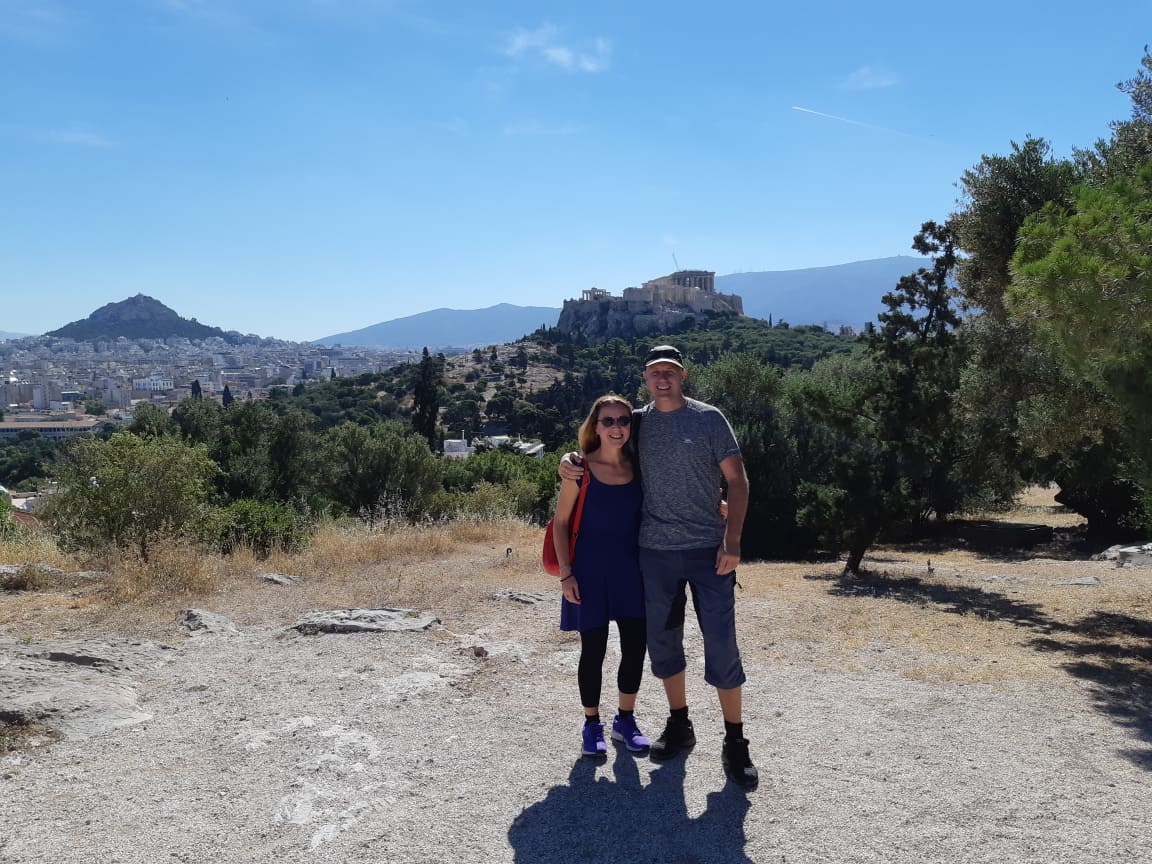 During the first part of our Athens bike tour, we passed by the National Observatory hill (great views of the Acropolis!), the Kerameikos Ancient Greek cemetery, the Ancient Greek Agora, the Roman Agora, and also the grand Cathedral in Athens named Metropolis.

Changing of the Guard

After a short ice cream break, the tour continued through the famous Plaka area into the shaded National Gardens, once limited to Royalty and nowadays one of the few parks in central Athens. I used to go there as a kid, but never with my bike, so that was a first! 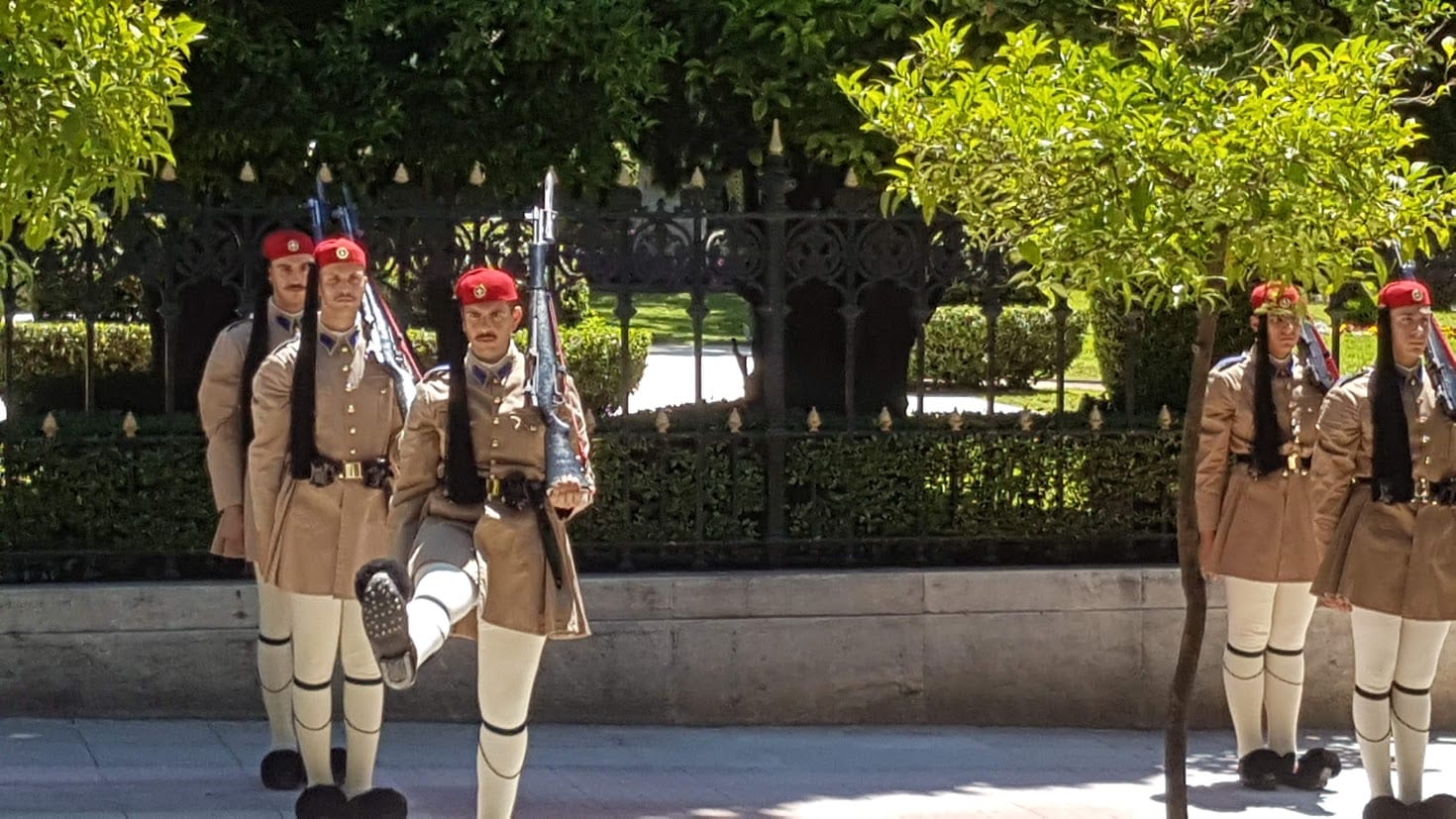 Moving on from the Gardens, we stopped across the street from the Presidential Mansion, to watch a Changing of the Guards which is less popular than the one in front of the Parliament. 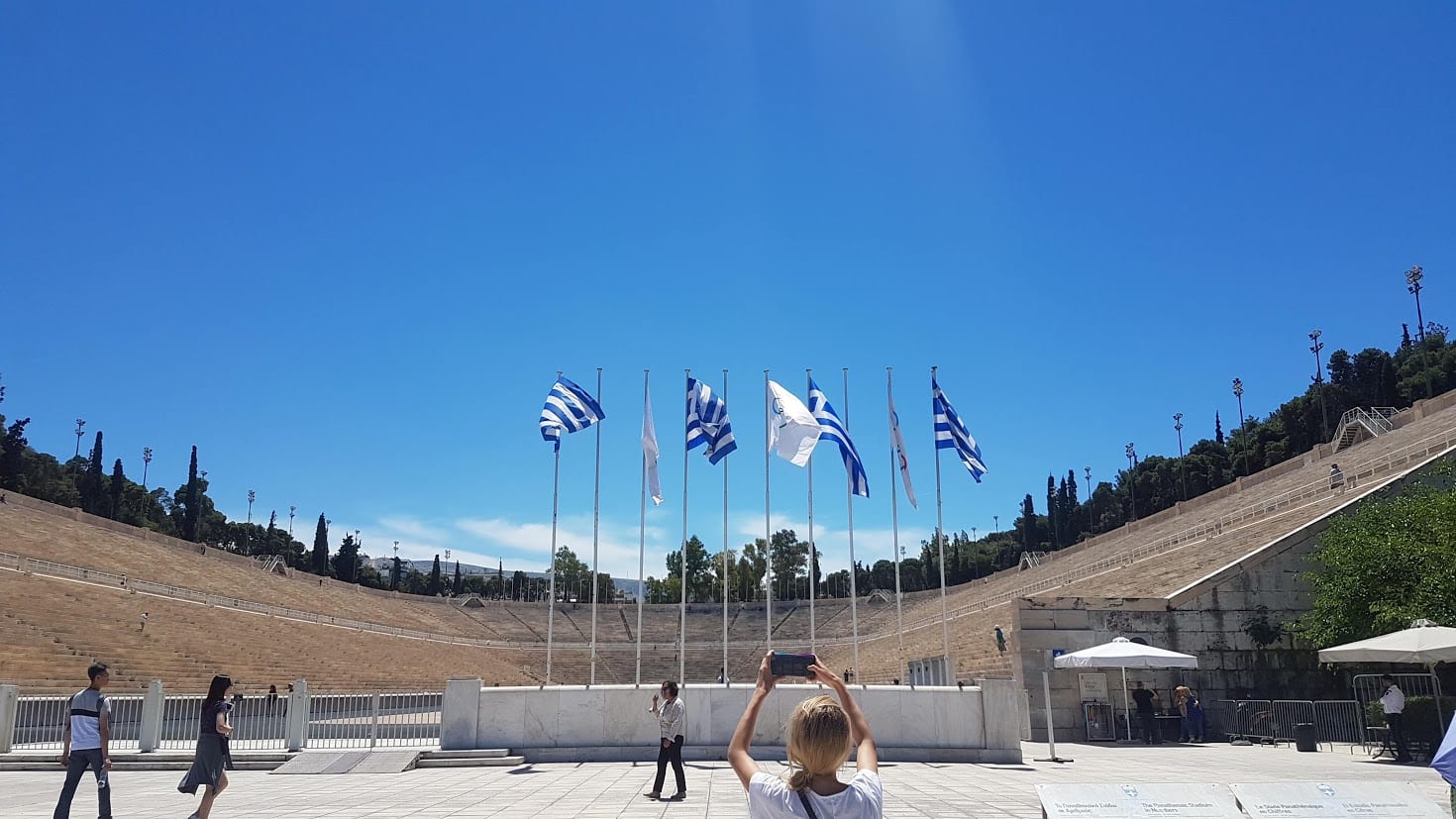 We then proceeded to visit the Panathenaic Stadium, the birthplace of the Modern Olympics in 1896, and Zappeio Megaro, a beautiful neoclassical building which served as the first “Olympic Village” of the times.

Our tour ended in front of the temple of Olympian Zeus in Athens, where we took a final photo of Hadrian's Arch with the Acropolis in the background. 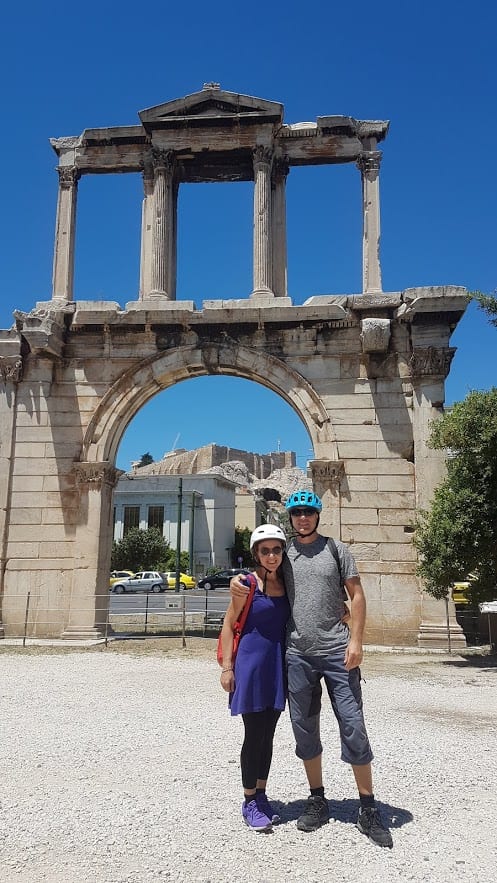 Athens by bike – Our opinion and conclusion

We will start with the chosen route – I am sure that A LOT of work went into it, as Athens is not only a city dominated by cars, but also a rather hilly place.

Somehow though, most of the route seemed to be fairly flat. Apart from a couple of spots, it was a really easy Athens bike ride, and I was impressed by how it has been designed to avoid both the traffic and the pedestrians with very few exceptions.

By now it’s obvious that I’m no seasoned cyclist. My bicycle was absolutely perfect for me, as opposed to other bicycles I’ve used in the past few years.

I actually asked “Athens by bike” a few questions about their bicycles, and found that they replace them every 2-3 years, and sell the used ones. Hmmm…! For anyone interested, it was an Ideal with a step-through frame.

For the duration of our “Athens by bike” tour, our guide Dimitris was very informative and made the whole discussion interesting for everyone, including the children.

He was also very helpful with taking photos, and clearly enthusiastic about the bike tours and all things outdoors. Tip – ask him for the best island to visit in Greece and see what he says!

Although it was clear that the tour is very well designed, I wanted to ask a couple of questions about logistics and safety just out of my own curiosity.

They seem to have taken everything into account. This probably reflects in the great reviews they are receiving, and the fact that they often have more than one tour per day.

In my opinion as a non-cyclist, this is a great tour if you want to see a lot of central Athens in just a few hours.

As an Athenian, I was happy to learn a couple of new things about my city, and excited to find out that cycling in Athens is actually possible.

As a last note, for people who feel they may be unfit for this tour, Athens by bike can also provide an e bike instead.

I was so happy with the bike that I thought about renting it out for a day or two. I am not sure if Athens bike rental is popular in general, but “Athens by bike” rent bikes for a day or longer.

Prices start from 10 euros a day and there are discounts for longer periods of time. They also rent helmets, kids’ seats, and even panniers, for anyone interested in bike touring Greece.

If you want to rent a bike in Athens, click here.

We hope this article has inspired you to do some cycling in Athens, even if you haven’t been on a bicycle for ages. If you're still unsure about booking an Athens bike tour , check out their Tripadvisor Reviews. They speak for themselves!

Save this to one of your Pinterest boards. That way, you'll be able to come back andread this guide to Athens by bicycle for later. 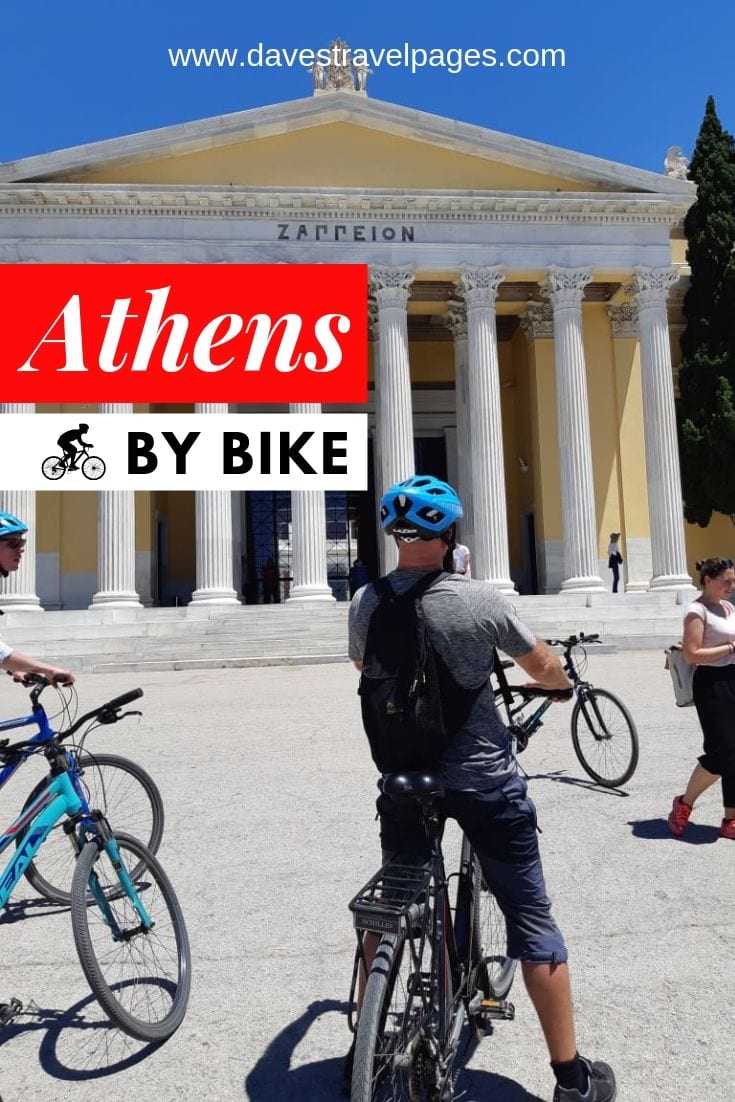