Last Updated On April 5, 2021 by Dave Briggs Leave a Comment

During this leg of the Pacific Coast Highway bike tour, I cycled between Cape Lookout and Devil's Lake. Here's the travel blog from the day's cycling.

The routine of the last few days has been raccoons wake me up at 02.00 by tipping a bin over somewhere and fighting, followed by rain at 05.00, and today was no different.

The rain had stopped by the time I wanted to leave though, which was a result, although a mist hung in the air where the sun was evaporating the moisture on the ground and trees.

Straight into a pretty stiff two mile climb first thing, which unfortunately was enclosed by trees so there were no views to look at.

Once back down the hill on the other side, I stopped in a little grocery store run by Waltons look-a-likes for a coffee and a muffin before carrying on again. 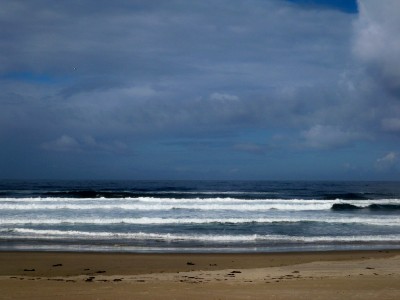 I caught some great views of long, empty beaches, with the waves crashing in, and its really hard to capture  either on film or with words how I feel as I pass sights like that.

On a bicycle, you find yourself soaking up your surrounding, rather than focusing in on a particular object.

I decided to stop the night at Devil's Lake state campground in Lincoln City because I like the name. $4.00, free hot showers, perfect.

Apart from when a family decided to pitch next to my area, and their four kids went on a synchronized screaming frenzy for half an hour whilst their parents ignored them.

Lets see how they like Slipknot played at 07.00 in the morning !

– Dave Briggs
Dave wrote this travel guide about cycling to Devil's Lake when cycle touring from Alaska to Argentina.