Last Updated On April 5, 2021 by Dave Briggs Leave a Comment

The Oregon coast is great for cycling – but be prepared for the rain! During this day of the bike tour, I cycled between Devil's Lake and South Beach.

Rain on the Oregon Coast when cycling

It rained heavily at about five in the morning for an hour, but after that the day cleared up nicely. I only had in mind a short little hop of some twenty miles or so, which would set me up perfectly for the road ahead on the following days.

The scenery, or more accurately access to visible scenery was vastly improved, and I took a few photos that I am sure I will have no hope of identifying after a few days. I’ll just have to create an album called ‘Oregon Coast’.

I bumped into Tom again today. 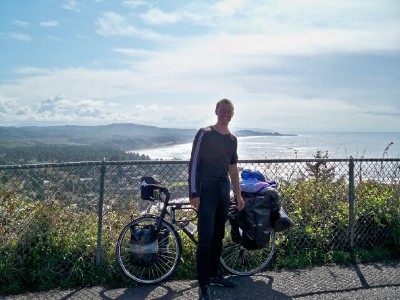 Tom is a cyclist from England whom I had first met in Canada cycling in the opposite direction, and it’s a small world indeed when peoples paths cross again like this!

He'd been putting in some huge days distance wise, but decided to do a half day cycling with me instead. Its always good to meet and talk with other cyclists on the road to pick up hints and stories, and I was interested in hearing that he had cycled through Russia, which is definitely on my ‘to do’ list, although not the next trip. (Yes, I have the next trip planned already!!).

It turned into a great day as we did a bit of net-checking and recharging in a visitor centre, some eating in Subway and other odd jobs.

Tom had been doing a lot of wild camping, so the hiker/biker set up was a bit of an eye opener for him, especially when you consider what you get for your four dollars.

We even managed to get free coffee and popcorn at this one. And of course, listen to peoples stories which I always enjoy doing.

He’ll be back on his 100 mile days tomorrow, but I think I’ll stick to my fifty mile days… That’s more than enough!!

Use the links below to read more blog posts from this tour:

– Dave Briggs
Dave wrote this travel guide about cycling in the rain on the Oregon coast when cycling from Alaska to Argentina.