On today's leg of the Pan American Highway cycling tour, I cycled from Ciudad Constitucion to El Cien in Mexico and ended up camping on a roof!

I got going at around nine, on what was a reasonably flat road. The miles flew by, but I have to say, that I missed my MP3 player which is now officially RIP.

It was a hot day, and I stopped in every settlement that had a store/café to get a drink. Come three in the afternoon, and with well over 100 kms taken care of, I stopped at a restaurant just south of the settlement of El Cien.

I asked in my best possible Spanish if it was possible to stay the night, and the owner soon showed me somewhere suitable to set up my tent.

My Spanish is improving day by day, and although I don’t claim to be fluent, in situations like this, it really helps, as peoples reactions are much warmer.

Anyway, the place to pitch my tent was up on the roof of the restaurant next to the water tank, and away from the dogs. The restaurant was pretty awesome too, as I got a meal, three beers and a bottle of water for 86 pesos – just over four pounds. 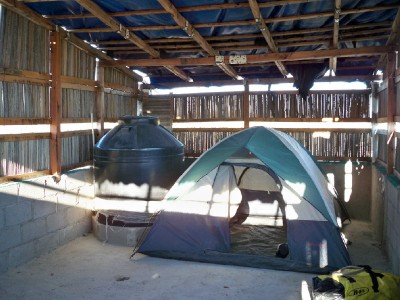