Leaving El Cien, I cycled on to the harbour town of La Paz in Baja California, Mexico as part of my bike tour through the Americas.

Not the best nights sleep, but that’s what you get for sleeping on the roof of a busy truck stop restaurant.

Breakfast was huevos rancheros and a couple of cups of coffee, the last one of which tasted like it might have had a drop of rum in it… perhaps I was just having a flashback though.

On to the road, and although my legs were aching from a few long days, I made good time. A couple of hours in, and Bob got its first puncture.

There’s been so many small, spiky thorns laying around Mexico that it was only a matter of time before it happened. I patched it on the spot, and was off again within half an hour.

On reaching La Paz, I found Pension California which Roberta had suggested and checked in. At 200 pesos a night, and centrally located its good value.

After a much needed shower (which included clothes wash… I’m still working out how to do a non X rated video of that one!), I stocked up on food at a supermarket, and had a Burger King. Yes, you read it right!! I must be in civilisation!

I’ve located the Marina clubhouse, and tomorrow, I’ll go down and put an advert up asking for a ride to the mainland. I’ll stay in La Paz for a maximum of four nights, and if no ride is happening, I’ll get the ferry over to the mainland. 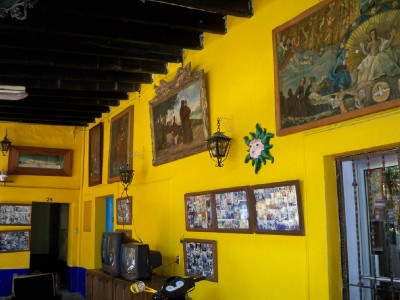