This bike touring blog post covers the day's ride from Cuyutlan to Ticla in Mexico. Part of my PanAmerican Highway bike touring adventure.

Initially, I thought that someone had slipped some low grade acid into my morning water. First, I was served by a transvestite in a service station, and then I was passed by a guy on a moped wearing a genuine World War 2 German storm trooper helmet.

Things soon settled down though, and the miles started to fly by. It seemed that everybody I passed wanted to say hi or to wave. The road was flat, and I was able to get down over the handlebars and really pound some miles out.

I was aiming for an RV park called Rancho Burganvillas that I had read someone had stayed in, but it was closed. This meant pushing on further, and by the time I had reached Ticla, I had clocked up over 130kms. 40 pesos to camp though, so it was all cool! 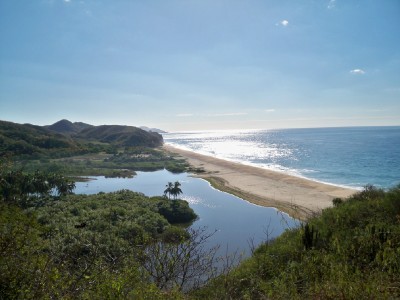