Last Updated On August 14, 2021 by Dave Briggs Leave a Comment

My first experience of cycling across the salt pans in Bolivia! This blog post covers cycling from just after Huachacalla to Coipasa in Bolivia.

Cycling toward salt pans in Bolivia

Quite a bit colder over night, and although my two water bottles in the tent were ok, the one I had left on the bike had frozen solid.

Breakfast of porridge, and I also managed to find a tea bag in the bottom of one of my bags. It’s the little things that are comforting!

When I was packed, I back tracked to Huacachalla to fill my stoves fuel bottle up at the petrol station, and then continued on my way. Again, the road was pretty horrendous.

It is being prepared for an asphalt surface (allegedly) but by the state of it, I would say that is a few years away yet. I stopped at Sabaya for  bite to eat at lunch time, and  had a chat with some of the people there.

It really seems to be a matter of luck as to who you talk to in Bolivia. They either don’t register your presence at all, or they wont shut the hell up from talking!

On the road again, and it degenerated from horrendous to abysmal. Really bad corrugations and sand pits, where I had to push the bike out a couple of times. At the town of Villa Vitalina, the road(?) ended, and I cycled onto my first salt pan. 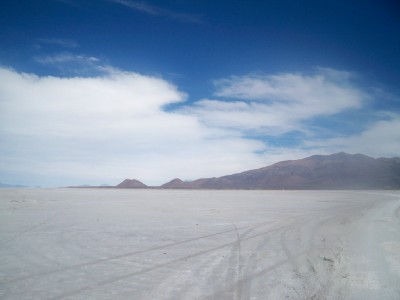 There were a confusing amount of tracks at first, but according to someone I had asked, I was aiming for the cleavage between two breast like mountains.

Cycling on the salt was quite strange at first, as it was slushy in places, giving the feel of cycling on melted snow, only without the ice. 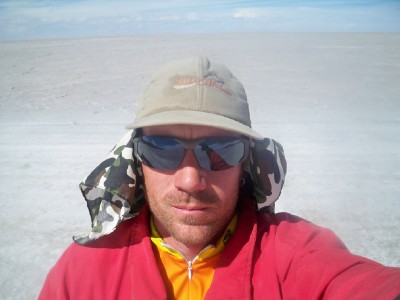 It was just short, one hour cycle over to the “island” of Coipasa, and from there, another confusing array of sandy tracks.

Still heading towards the cleavage, I spied the town of Coispasa, and was slightly disappointed. I think in my mind, I had built it up to be some Gondor type citadel from the Lord of the Rings, whereas it was actually a collection of rather shabby mud brick houses built in the wind shelter of a hill.

A quick cycle around, and I managed to find somewhere to stay for 10 BS, although this was without power which was a bit of a shame, although I got the girl to charge my laptop up. I am quite glad I am not in the tent tonight, as the wind is absolutely howling out there.