During my bicycle touring adventure from Alaska to Argentina, I travelled over varied terrain. None was as memorable as cycling across the Coipasa Salt Pan in Bolivia though! 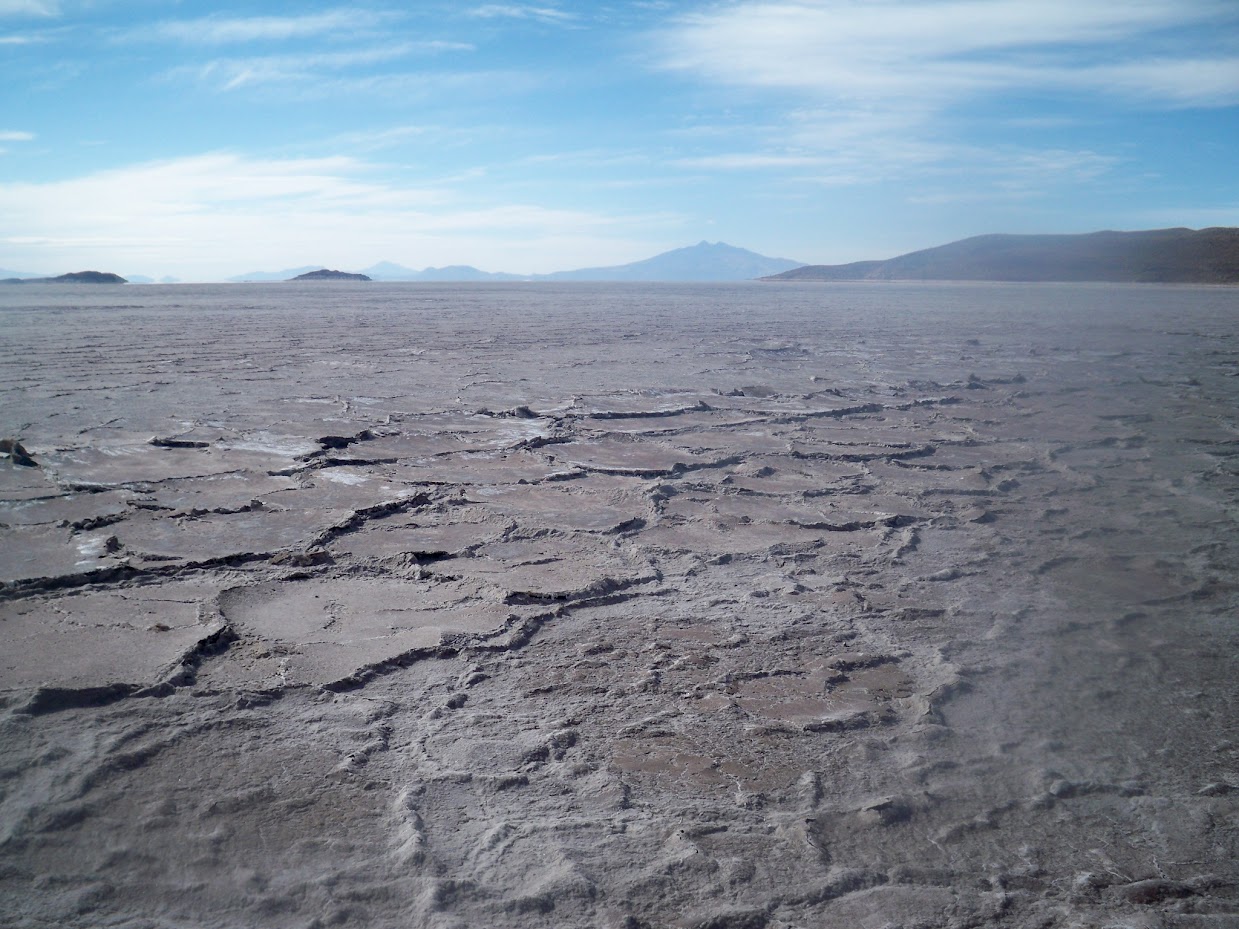 Cycling Across The Coipasa Salt Pan

Morning in Coipasa has a routine that I quickly adapted to – That of everyone in the village going for a wander onto the salt pan to take an early morning dump. Going to the salt pan was better than heading to the cacti! 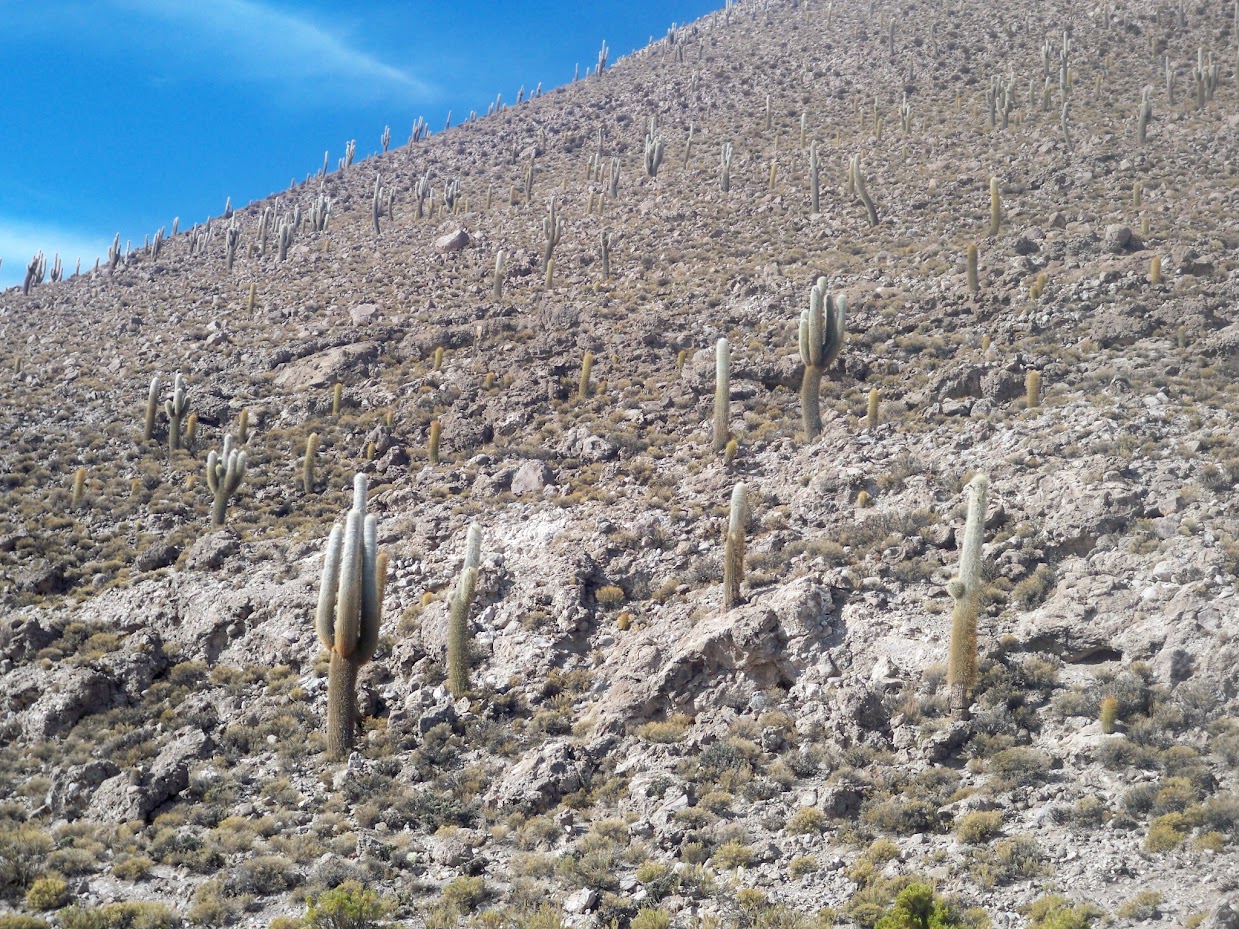 With that taken care of, it was breakfast, and a final ask around for directions. No, not from the llamas! 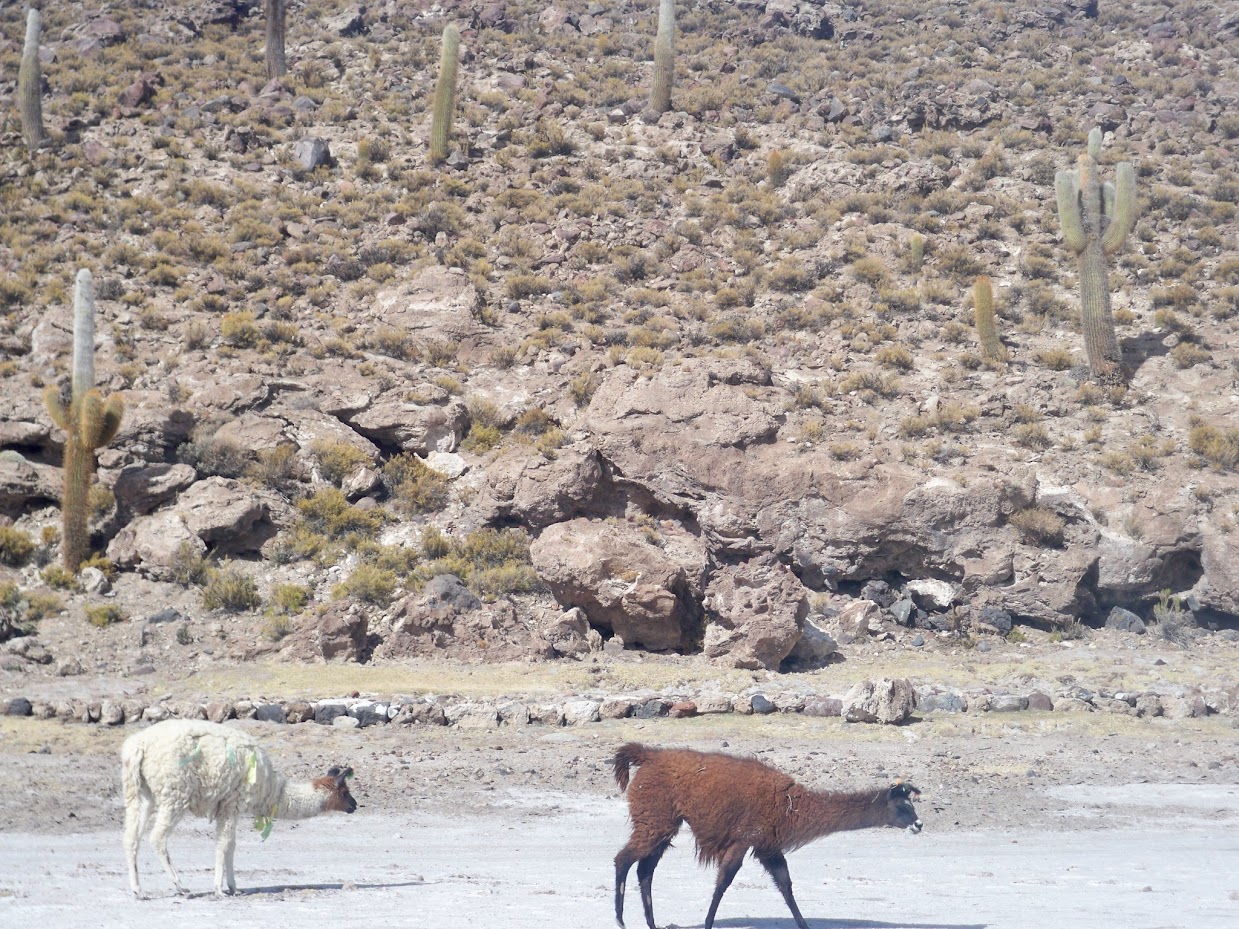 Apparently, there was a well defined route over the salt pan to the settlement of Tres Cruces which was easy to find. Easy to find, that is, for anyone but me.

After cycling almost halfway around the island, I couldn’t find the route, and so had to come to a decision. I could see the other side of the salt pan, and so decided to head south/south east as according to the admittedly shoddy map I had, that’s about where I needed to be.

After a bit of fannying about, I went for it. 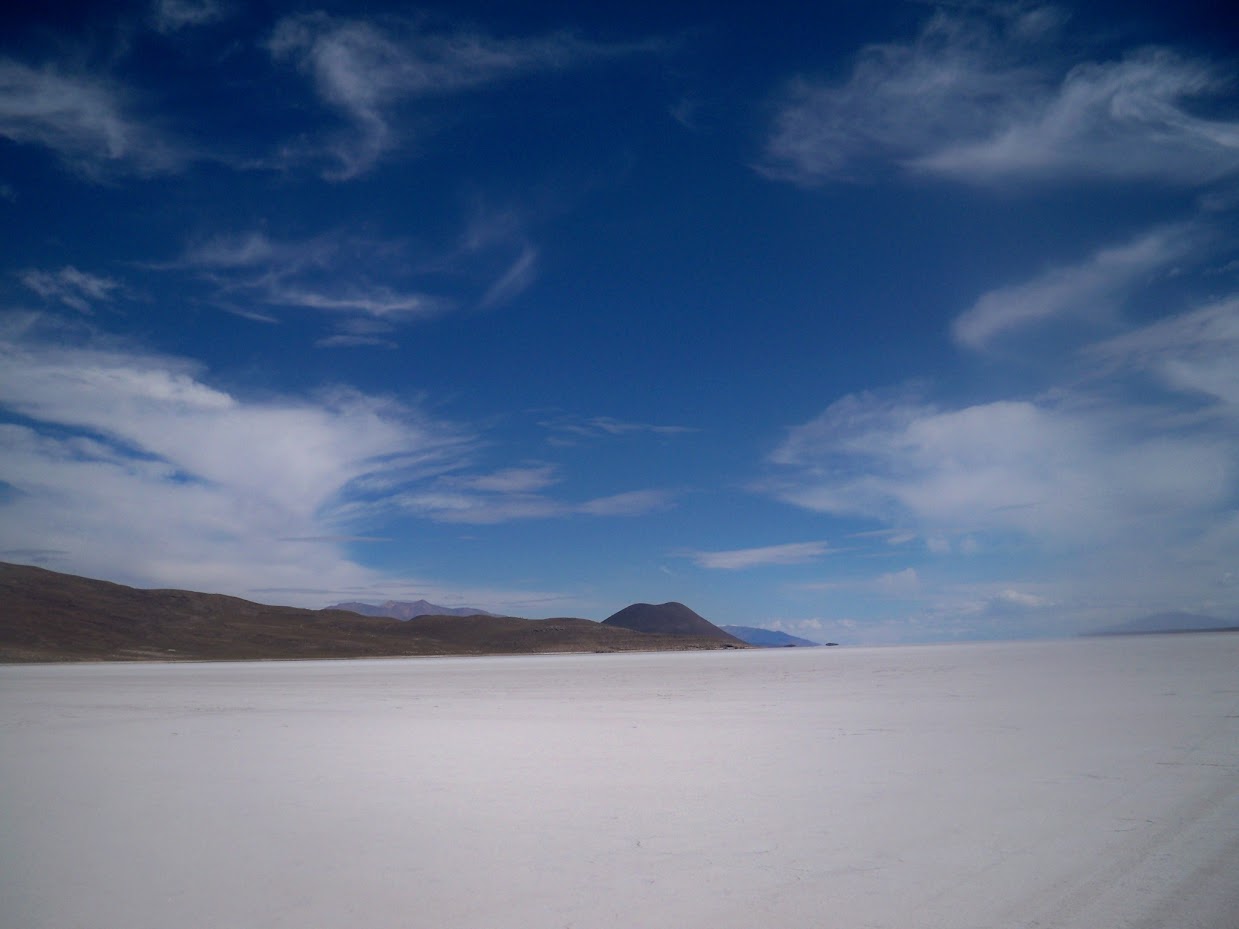 Looking back on the island of Coipasa. The salt pan was quite strange to cycle over, with it cracking a little like thin ice as I cycled over it.

The Coipasa salt pan plates were a common feature as I cycled southwards. 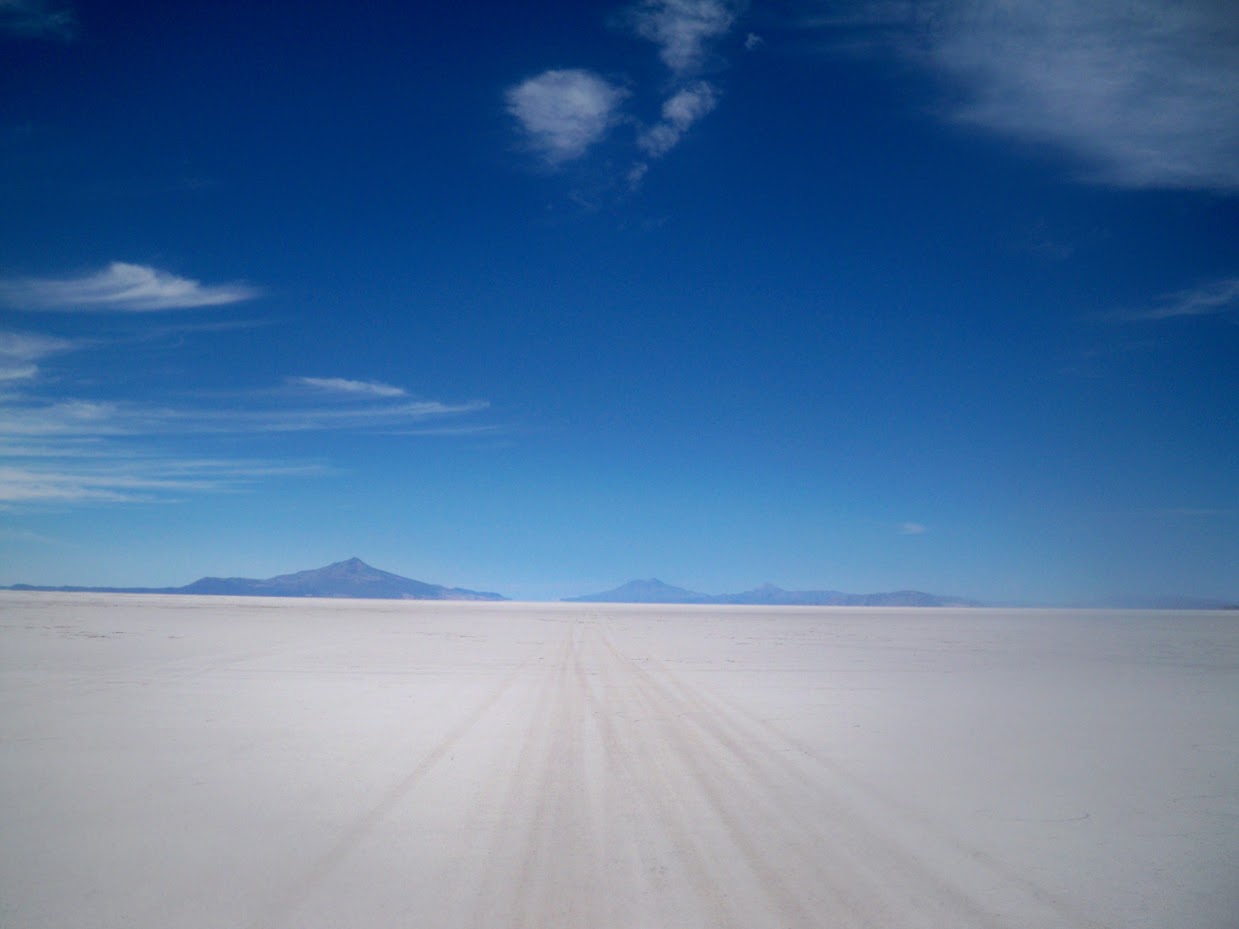 The size of the salt pan was quite awe inspiring. It is the remnant of an ancient, dried up ocean.

The other side of the salt pan was a lot further than it looked. Two and a half hours after leaving Coipasa island, I was still cycling towards the mainland.

Eventually, I stumbled across a more defined set of tracks, and then across an even larger set of tracks. It headed towards where I thought I should be, and eventually I made it off the salt pan. 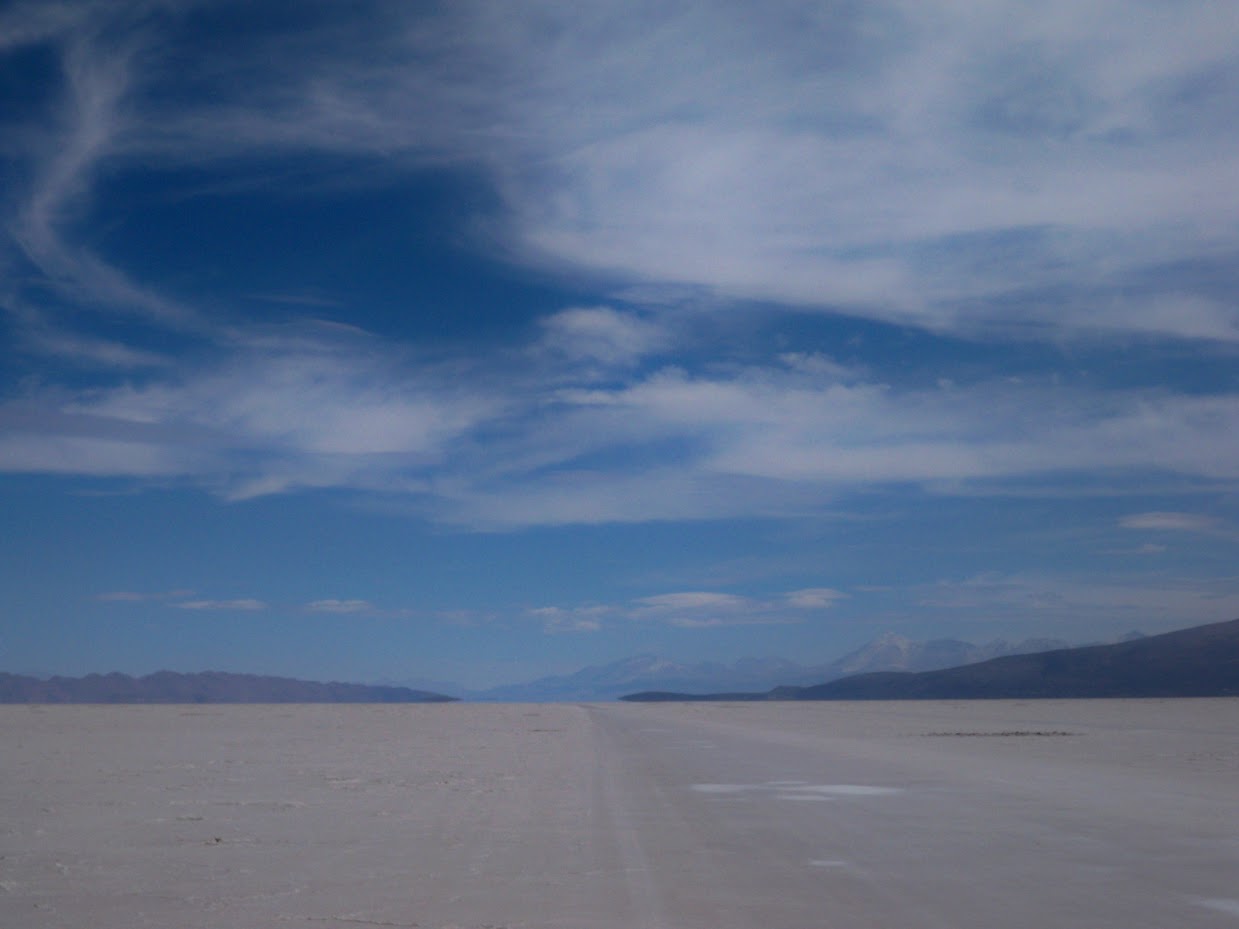 A track headed to the left, and so I took it in absence of any clearer direction. Leaving the salt, the track became dusty, and then sandy.

So sandy, in fact, that I couldn’t cycle through the sections which were more than 4 inches deep in sand, and had to push the bike. Let me tell you, that pushing a bike with a heavily loaded trailer through sand is absolutely zero fun. 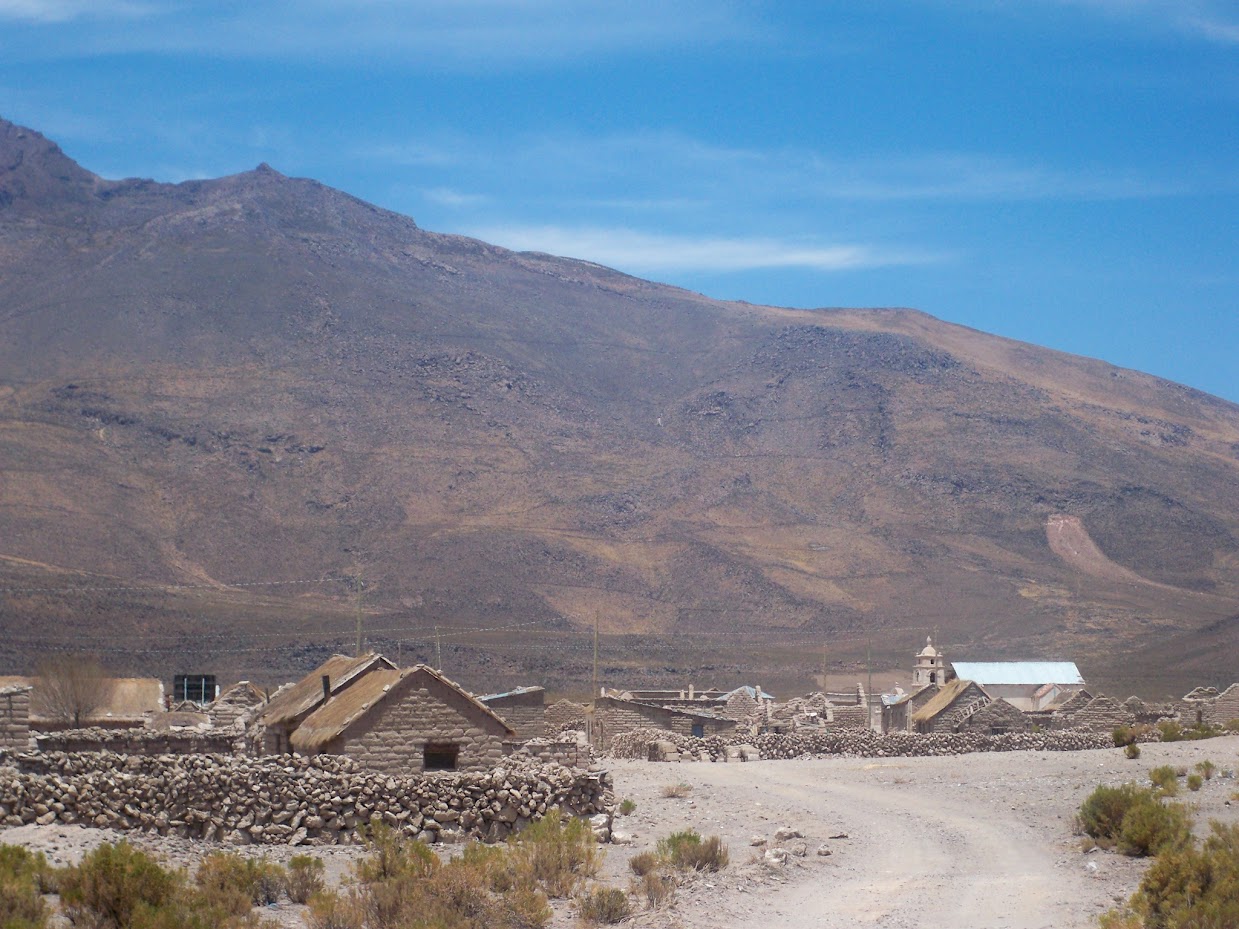 I came across a village, which I couldn’t tell if it was being built or destroyed, and was very much a ghost town.

Two gusy came by on a motorbike, an I waved them down to get directions. It seemed that I had overshot far too much to the left, and would need to backtrack to the salt pan, and then carry on further in the opposite direction. If there’s two things I hate about cycling, its

There was just the ever so slightest amount of cursing going on!A half hour of cycling, and I could see a village which I assumed must be Tres Cruces, which involved me turning off to the left. More devastatingly energy sapping sandy tracks were to follow, as I headed up to the small settlement. A 2 litre purchase of lemonade was well needed!

What wasn’t needed, however, was the little old lady telling me that there was no road through Tres Cruces to Llica, and that I would need to backtrack all the way I came, and then turn left.

That’s twice my map has shown a village to be on the main road, when in fact it wasn’t. Did I mention the two things I hate about cycling ??

The road started off fine, and in a change of form, the wind helped a little, which actually had me thinking that I must be going in the wrong direction! Not that there was anyone to ask. Over the next five hours of cycling, I saw just 4 cars. 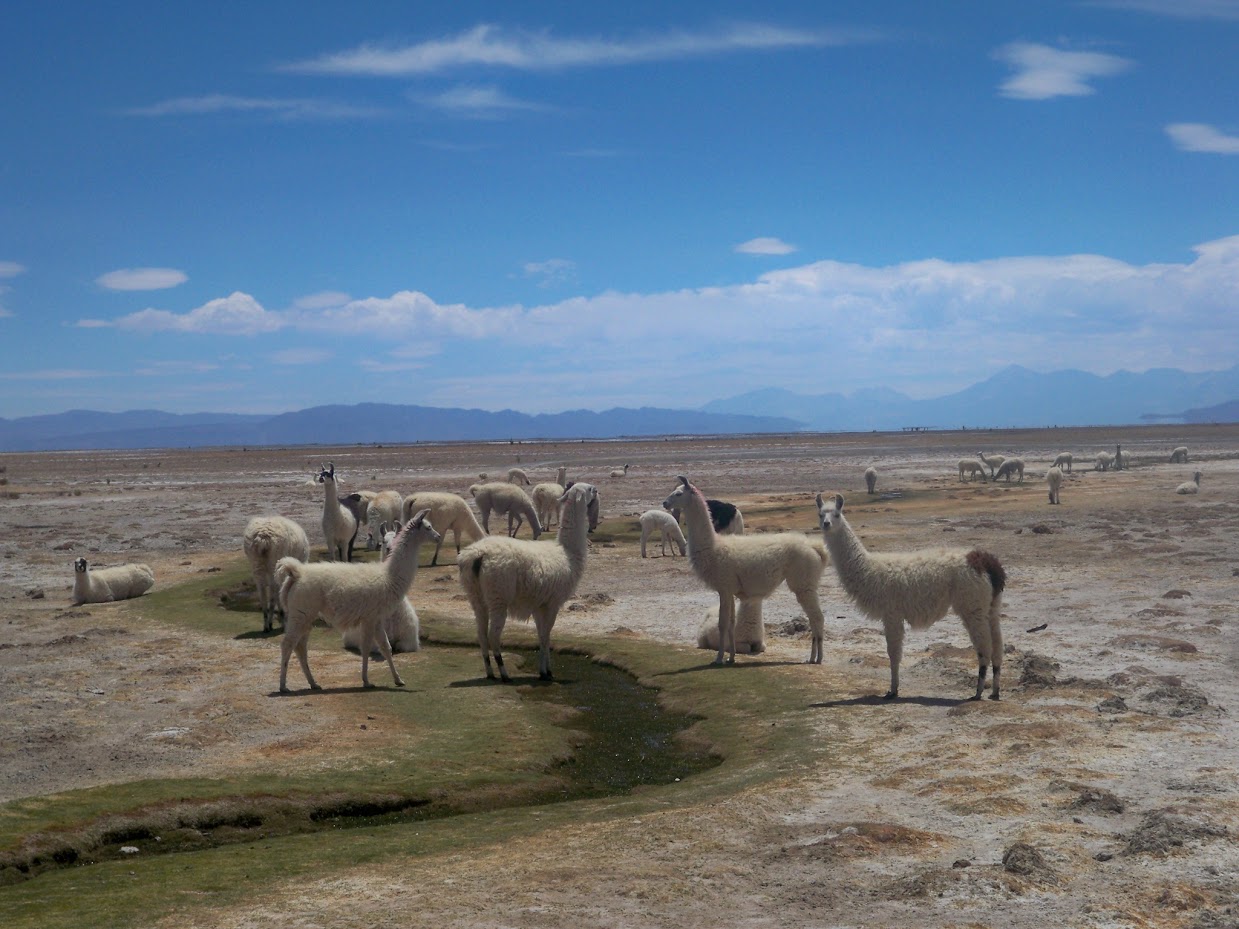 There were plenty of llamas though! The road deteriorated halfway through, and sandy racks then prevailed. Its hard to describe just how tough it is to push a bike and trailer through the sand. 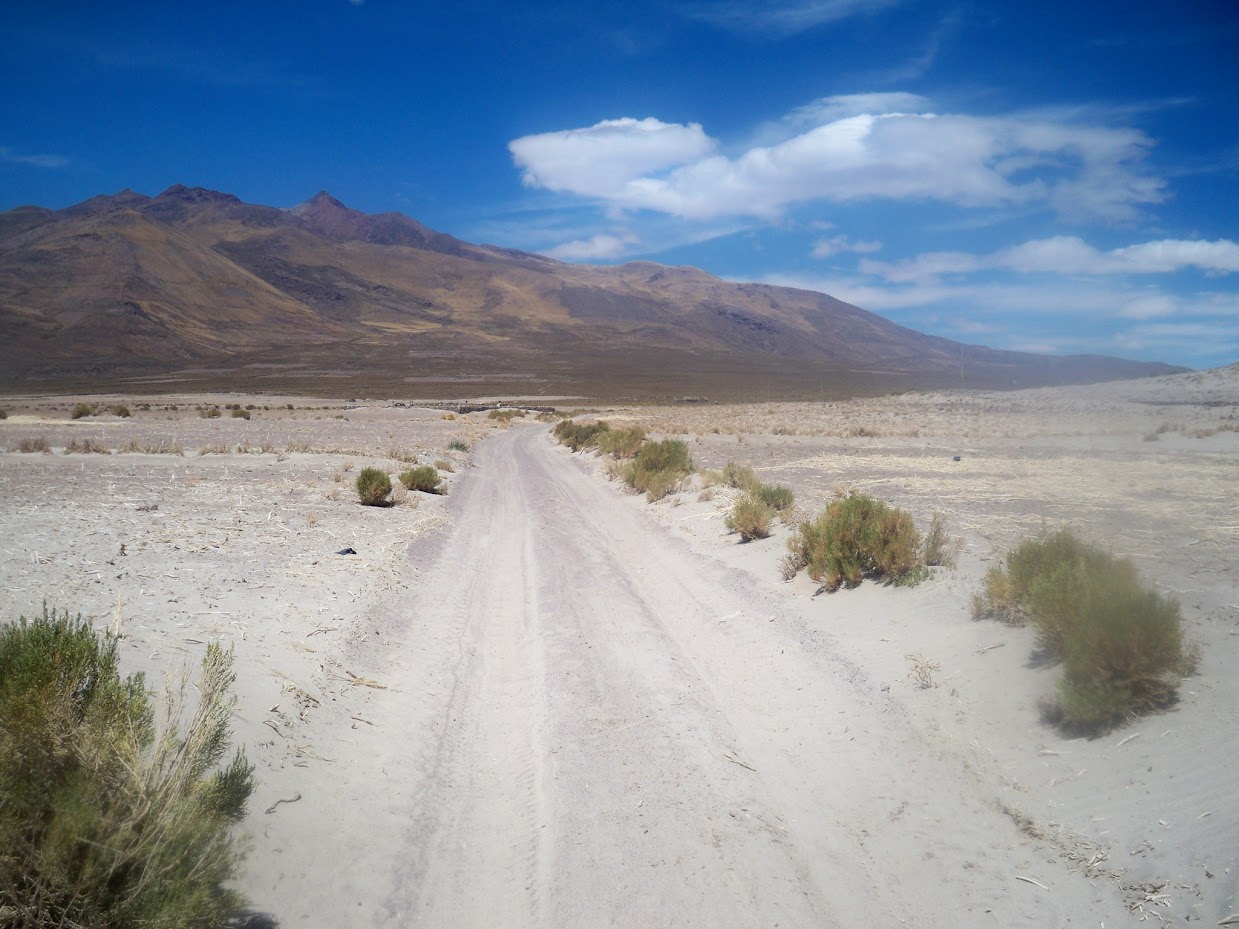 I think today was even worse than some of the days I had cycling through the sandy parts of Sudan. 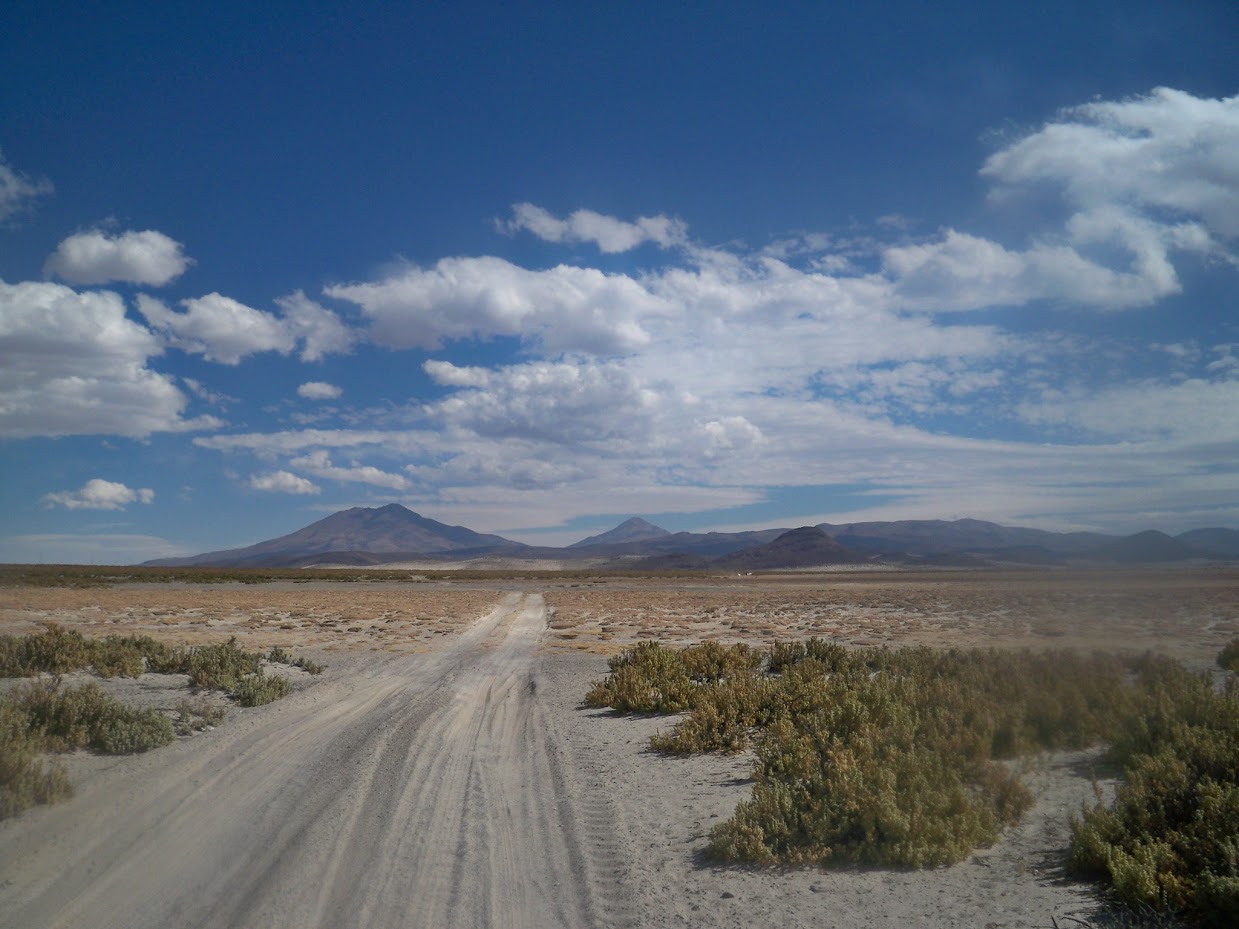 As I was pushing the bike, I got around to thinking how much easier it must be to just do a walking trip. Sure, you don’t get the distance done in a day that you can on a bike, but there is so much less hassle and energy expenditure.

Eventually, after much exertion, I reached the town of Llica. There’s not much too the place, but I got a reasonable room for 25 BS a night, and there is even internet here. At an astonishing 8 BS an hour though!!

Dinner was three plates of rice and fried llama. Tasty!!

I will take the day off here tomorrow, as quite frankly I am completely wiped out… I am also starting to see why not many people take the route here I did!!

During my day off, I need to get a few normal jobs done, but I also need to inquire about the route over the next salt pan, as I can’t do this next one half-arsed!! 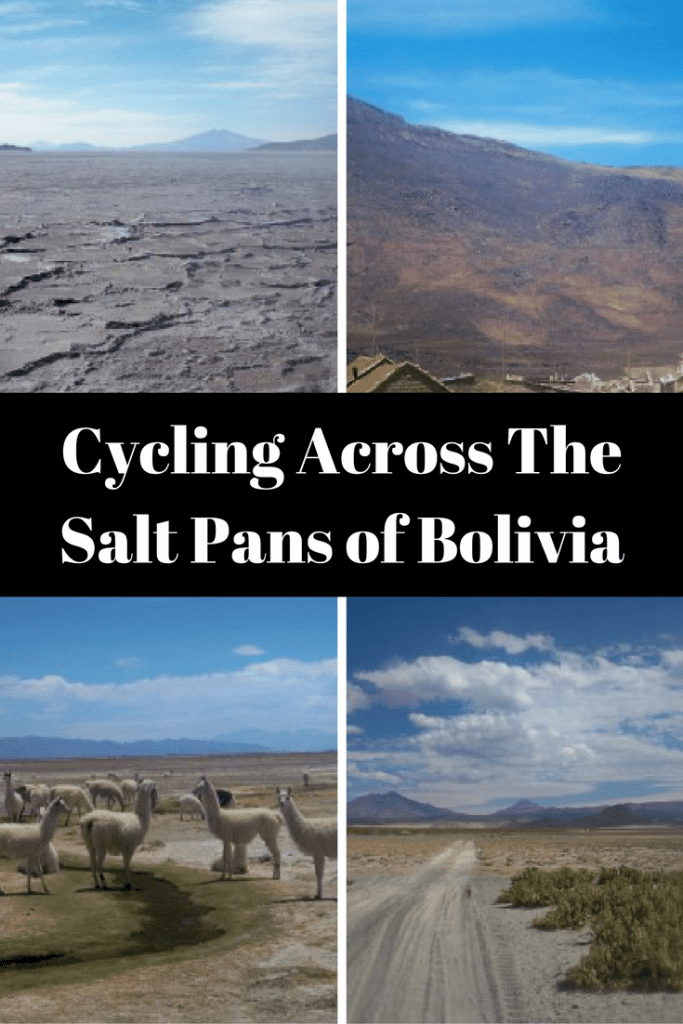