Last Updated On August 17, 2020 by Dave Briggs Leave a Comment

Leaving Villa Union after cycling the Cuesta de Miranda, I continued cycling towards Mendoza in Argentina, and wild camped the night near Huaco.

An Englishman in Argentina

I was packed and out of the Residencia by 09.00. A shame to go really, as it was such a calm and peaceful place. I stopped over the road and the bakery for some bread, and had a typical reaction when I mentioned that I was English. The situation normally goes something like this.

1. A conversation for a couple of minutes about what I am buying, moving on to general chit chat abut my bicycle tour.

2. The question is asked about which country I come from

4. The resulting facial expression from the person asking is something similar to a person at Christmas being really excited about opening a present because they think its an iPod, only to be disappointed when it’s a pair of slippers.

The reaction is normally from the ladies… the guys are a fair bit cooler about it. I think it has something to do with the in built female trait of building a romanticised version of a male from a foreign land. When I turn out to be from “the old enemy” they are quite let down! I find it all highly amusing.

Anyhow, onto the road, and the first couple of hours to Guanducol were very easy, especially the last hour when I didn’t really have to turn the pedals. The rest of the day didn’t carry on in the same vein though. 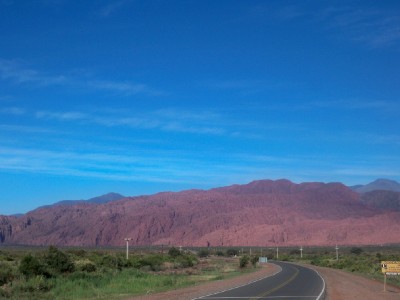 After leaving the service station where I had filled up with water, the direction of the road had turned, and it was right into the wind. Add on top of that a slight uphill angle, and I spent the next 6 hours working twice as hard and getting only half the distance. I hate a headwind! 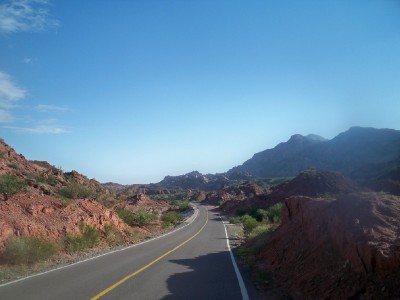 Just past a turning to Huaco, some 110 km at the end of the day, I passed a police post, pedalled a few km and the set up a wild camp by a river, which was unusual in these parts in that it actually had water in it.