Today's bike touring blog post covers the ride cycling between Belen and San Blas in Argentina. Part of my bicycle tour from Alaska to Argentina.

A thought about siestas in Argentina

So far, I have enjoyed Argentina. There are a couple of things that I find irritating though.

Excluding the couple of Falklands conversations that I have had (waiting for more experiences before I write about it!), the thing that I find most annoying is shop opening times and the obligatory siesta.

If a shop/internet café has a sign that says it will open at 07.30, and when you ask them they say “yes, 07.30”, then a reasonable person should expect it to be open then.

After checking my email in another place, it was on to the road. All in all, a reasonably easy day's cycling. Nothing to report in terms of scenery in particular, as I cycled through a lot of desert regions.

Stopped for lunch at a roadside shrine thing. These are scattered throughout the road systems of Argentina, and are normally indicated by a bunch of red flags. This one was a bit more elaborate though. 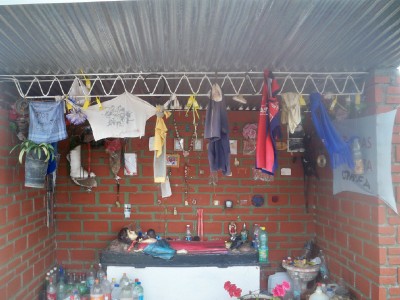 The people of Argentina seem quite superstitious, putting a lot of faith in saints, luck and so forth. I think these roadside shrines act as either a memorial to a person killed on the road, a shrine to a local saint, or were the point of some miracle or other.

Its all very complicated, and so I feel much better off with my heathen barbarian views on God and such. Anything for an easy life.

I continued on again, and a confusing fork happened in the road that I wasn’t expecting. My map is not much good (what a surprise), and was no help whatsoever.

I eventually flagged down a car for directions, and it turned out to be a rather nice German couple. Thanks guys! Taking the left turn where it met the Ruta 60, and then the first major right turn 2 km later onto the Ruta 40 I was back on track. (Folks at home, I appreciate that means not a great deal to you, but Joe Bloggs cycling might find it useful!).

I cycled into San Blas, and there was a municipal campground on the right hand side almost immediately, so I dived in there. The showers were actually half decent for a change, and the inside reasonably clean. There was one small issue with the outside though, with its “Viva Hitler” graffiti. Seems I must have missed the Nazi convention.