Today's bike ride from the thermal pools near Huafin to Belen in Argentina was quite eventful, as I had to carry my bike through (yes through) several rivers.

An adventurous day on the bicycle

Quite a mixed day all things considered. I was packed and away by 9.00, and hit an immediate uphill section. It was reasonably steep, but thankfully only about 20 minutes of pedalling.

Once at the top, it turned out that I would be following a ridgeway for some time. Over on the right, there were some amazing looking rocks formations of different colours, which made me wish that I knew a lot more about geology than I actually do. 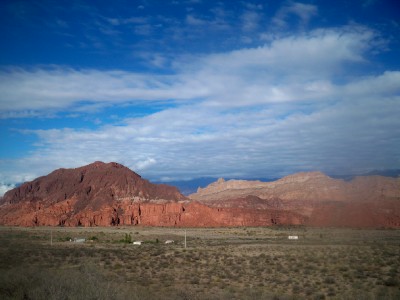 I descended from the ridgeway, and then came across some vehicles stuck in front of a river. There was a problem.

A lot of these dirt roads in the countries that I have been cycling through don’t have bridges. The road just crosses at a natural ford. The problem was, that the rains had increased the flow of water somewhat, and it was impassable to start off with for most vehicles.

The big lorries were ok, but I had no chance to cross a raging river 20 feet wide and up to three feet deep in places. No other choice but to wait then. 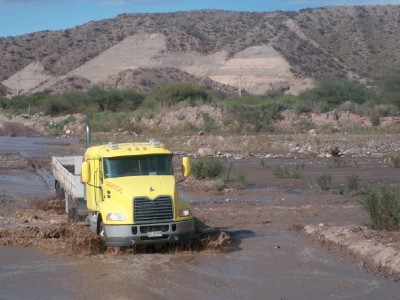 As time went by, it calmed a little (not a lot though), and 4WD vehicles were able to get across, and then so were normal cars. Two wheeled vehicles were still stuck though.

A bit later, a tractor turned up and started scraping and moving earth. It gave one moped rider a lift across the river. 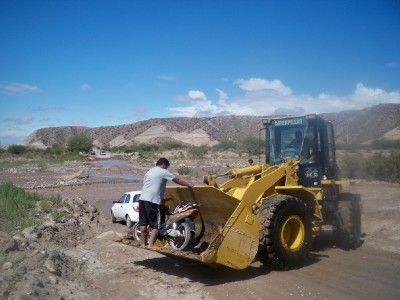 Not for me though, I ended up carrying my stuff on my shoulder for three trips, and wading across.

Fortunately, it was not getting much above my middle thigh but the water was still tricky in places. Finally across the other side, and I could get my shoes back on and continue cycling.

The road became asphalt after a kilometer, but the next issue to raise its thorny head was then a strong headwind. This plagued me for the rest of the day, and huge, dirty looking clouds rolled about the sky overhead.

Due to the delay at the river, and the headwinds, a simple 60 km cycle ride had turned into a bit of a marathon, with 8 hours spent on the road to Belen. Time for a hotel then.

And just in time, as the heavens then opened up, and it continued to pour for the next 12 hours.

I should be thankful really. If I hadn’t got delayed at the river, I would have been tempted to carry on cycling past Belen, and then would probably have been very wet during the night!