Continuing my bike tour through Peru, today's route took me from Cajamarca to San Marcos. Twisting roads and roast guinea pig were highlights of the day! 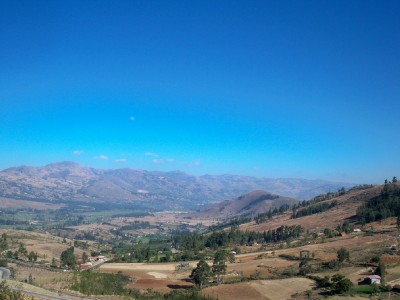 I was out of the hotel by 07.00, as I wanted to clear Cajamarca before the town became too busy. A gentle downhill back to Banos del Incas 5 km away, and after asking for directions, I was on the road to San Marcos.

It was quite a lazy day of cycling at just 65 km, and a total of 750 metre elevation gain, and all on sealed roads which made life easier.

There were plenty of villages along the way, and I stopped at the top of a climb, where several women were cooking up caldo de gallino. 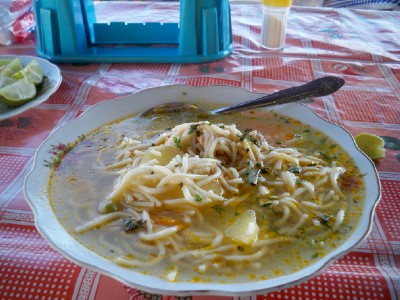 I’ve had this dish quite a few times now throughout this cycling trip through the Americas, and each time it is slightly different.

This time, the chicken's foot was absent, but the liver was floating around mixed in with the pasta and potatoes.

Cycling through this area of Peru, its pretty obvious that they don’t see many gringos ( a term which I should really explain more in another article), and especially on bicycles with a trailer.

People's reactions are varied, from open mouthed astonishment, to laughing, from coolness through to fright (one little old lady ran off the road and into a field in terror at the sight of me -can’t blame her really!).

Later on in the day, I had a nice helping of Guinea Pig.

Cuy, for those that don’t know, is Guinea Pig. This isn’t the first time I have eaten it, but it is the first time on this trip. Here's my thoughts on eating it.

Basically, people from other countries eat weird food. By that, I mean that a Japanese man would consider Scottish Haggis to be completely inedible just as much as a Scott might think that eating puffer fish was simply crazy.

After all, one person's delicacy is another persons nightmare, or indeed, sometimes a pet. Coming from England from example, I would consider a Guinea Pig to be a household pet – Not in Peru though!

No, in Peru, the Guinea Pig is dinner. That's right, the cute little squeeking fluffball with an innocent face ends up on peoples plates.

Known as “cuy” in Peru, it has been an important source of protein for centuries in the Andes, and is a staple part of the diet. To me however, it was something more akin to a right of passage.

I mean, I knew what cuy was. I knew that Peruvians ate it, and I also knew, that there was a pretty good chance that I could just avoid it altogether whilst cycling through the country.

That wouldn't be my style though.

Perhaps when I ordered, I thought that it would arrive neatly cut up into mouth size pieces, or that it might be in a sauce of some description.

What actually arrived though, was basically a complete guinea pig that had been flattened, had suffered third degree burns, and had a wooden skewer going up through its backside and out the top of its head.

If this wasn't bad enough, it still had its claws and eyes intact, and seemed to be looking at me with a “You're not going to eat me?” expression.

Appetizing?… Not exactly. As I sat there looking at it, surrounded by papa fritas and a bit of cucumber, I got the feeling that it reminded me of something.

Then it struck home, it reminded me of a suction cupped Garfield that people sometimes have stuck to the inside windows of their cars. Just a little bit more burnt.

Still, staring at it wasn't going to achieve anything, and so it was time to tuck in! I initially tried with a knife and fork, but it seemed that the more I dug into Fluffy (he had a name now), the less I was getting out of it.

Five minutes of hesitant carving away had gotten me a few mouthfuls which tasted like chicken. Sort of. A local saw me carving away, and indicated that I should pick it up and eat it that way.

I nodded with a wry smile, and gave it a go. I must say that I got a little bit more out of it, but not a great deal.

The only thing left to do was to eat the papa fritas to make it look like I had done a good job with the meal, and then move on, no doubt leaving some rather bemused locals behind me!

So, in conclusion, if there is an art to eating guinea pig, it is to suck the fat and meat off the bones. This is a lot easier said than done, especially if your stomach is turning at the same time!

I found it to be a lot of effort for not a great deal of reward, and although I did try it again some days afterwards, left it at the two attempts.

Chicken is a lot easier to eat, and it tastes like chicken because it IS chicken! Guinea Pigs make far better pets than they do supper!