This bike touring blog post covers the short day's ride between Chilecito and Sanogasta in Argentina. Part of my Alaska to Argentina bicycle tour.

I was in two minds as to whether I should leave Chilecito, as my legs were a little heavy from the previous week of cycling.

I reached a compromise though, and just did thirty kilometres instead. Even so, this was pretty tough work, probably due to tiredness, but all uphill and I wasn’t getting much above 8 km an hour out. 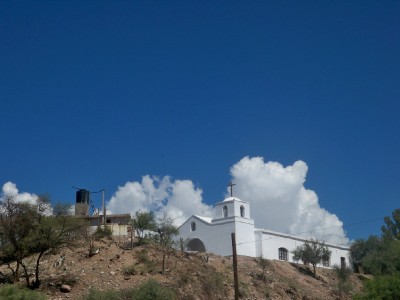 I reached the village of Sanogasta, and stocked up with a few things, especially drinks, as the day was a hot one. Then, I hit the road again.

Someone had emailed me and mentioned that there was a campground just outside the village, and so I headed there.

It was still just early afternoon, not even one. The perfect time to set my tent up in the shade of some thorny trees, and read a book all afternoon.

No one came to take any money, so it was a freebie as well!