Another day off in Mazatlan, Mexico. During the day, I met two other UK cyclists and did a few chores to prepare for the road ahead.

A pretty good nights sleep, and a breakfast of banana sandwiches saw me up and around early.

I wanted to check out the newer section of Mazatlan today, as I had heard rumours of a well stocked bicycle shop there.

As I left my room, two British cyclists came up and said hi. Alex and Fin had also started their trip out in Alaska, and are heading to Panama.

I had heard about these guys through the cyclist grapevine, so it was good to put faces with names.

They are being paid 10 dollars a day each by an independent film company to make a documentary of their travels, which sounds very nice, and something I wouldn't have minded doing, until I realised that towing around a camera and batteries weighing 5-10 kgs is not really worth 10 bucks a day !

After a bit of a chat, I cycled off in search of the bike shop, which I just couldn't locate, which was a bit of a shame. I managed to get some supplies for the road ahead and took a quick peek at the Mazatlan Cathedral though. 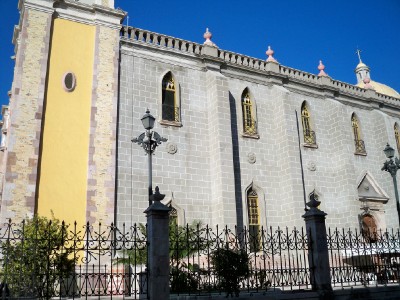 In the evening, I went out with Alex and Fin for a bite to eat at one of the roadside stands. Superb jacket potatoes!!