After taking an overnight ferry from La Paz, I arrived in Mazatlan in Mexico. As I needed a little rest, I decided to take one night in a hotel in Mazatlan.

Arriving in Mazatlan on the ferry

A pretty good nights sleep, all things considered, and once breakfast was taken care of, we were docking.

There were no immigration controls, and before I knew it, I was out of the docks, and cycling on the mainland of Mexico.

Things were a little busier and more chaotic in Mazatlan than they were in La Paz or Baja, but not too bad, and I soon found the hotel I was looking for. 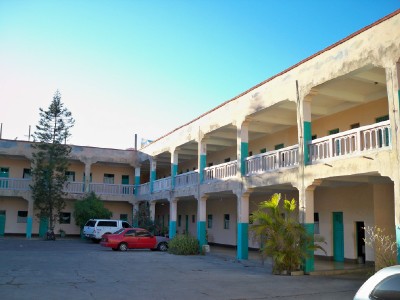 Hotel Lerma is an absolute bargain at 110 pesos a night, with wifi included.

In the afternoon, I had a bit of a wander around the markets and streets, and had a nice lunch in a cheap but cheerful restaurant.

At night, I watched Indiana Jones and the Crystal Skull. I still can't believe that Spielberg and Lucas did that to poor Indy. Surviving a nuclear blast in a fridge… OMFG !!