The cycle tour through Canada continued with this section between Hazletons and Rainbow Adult Park. What on earth was the Rainbow Park about? Let's find out!

The 8 km ride back up to the main road wasn't as bad as I feared it would be, and there were a couple of nice views along the way. 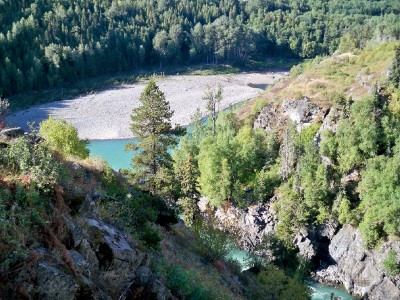 I had in mind as my target for the day the town of Smithers. The road was undulating, the sky clear blue, and the temperature way up there in the 30's. Having come from much colder weather, it was quite draining, and I never seemed to find an even momentum.

A quick rest in Smithers

That said, I made Smithers fine, and after locating the Golden Arches and having a Big Mac meal, I bought a bunch of bananas and decided to press on.

About 15 kms out of Smithers, I cam across the intriguingly named Rainbow Adult Park, which had a bicycle hanging up from a lamppost outside, and another sign saying ‘Cyclists Welcome'.

Unsure as to whether this was an invitation or a warning, I decided to go in and ask so as to clear the matter up. As it turned out, it was an invitation, and I got to stay the night for free in an old cabin on the trailer park that they use for any cyclists that drop by. 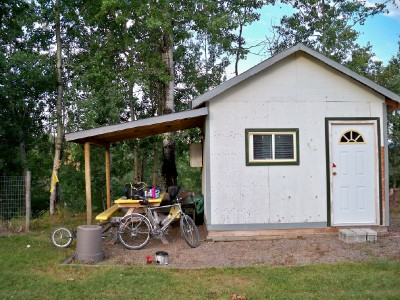 Places like that are a real rarity and treasure! Inside the cabin was an assortment of things left by either the owners or other cyclists, although no guestbook which was a shame.

I was still unsure as to what ‘Rainbow Adult Park' meant, and I really wanted to find out, but no one was around.

Without the tent to pack away, I planned on an early start in an attempt to cycle to Burns Lake. Along the way, I was expecting two major hills – Hungry Hill and Six Mile Hill, neither of which sounded terrific news.

More posts from this bike tour:

– Dave Briggs
Dave wrote this travel guide about cycling to Rainbow Adult Park near Smithers when cycling from Alaska to Argentina.