Last Updated On April 6, 2021 by Dave Briggs Leave a Comment

After resting for a day or two in Jaen, Peru, it was time to resume my journey by bicycle. This bike touring blog post covers the ride between Jaen and Bagua Grande.

Cycling out of Jaen

This blog post was written in 2010 as part of my Alaska to Argentina bike tour.

Quite an easy day's cycle, with the majority of it either being downhill or on the flat. I once more passed by rice paddy fields, until I started a descent through a canyon, where the sealed road tracked the river. 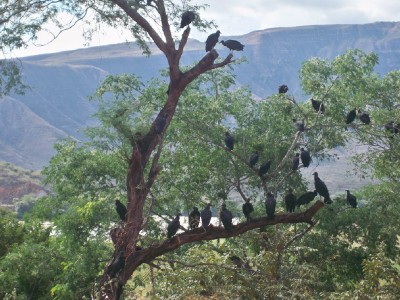 There were hundreds of colourful, and I must say, rather fast birds. Far too fast and small for me to catch on camera. These vultures taking it easy in a tree didn’t seem to mind having their photo taken though.

Coming out of the canyon, the terrain was very much changed. What was green with plenty of water was replaced with arid scrub land on either side of me.

I cycled through a brief section of road which seemed plagued by small burr type thorns, and quite a few embedded themselves in the tyres.

The extra thickness of the tyres saved me from what could have been a complete disaster, but I did pick up a puncture in the front tyre, which I pulled over to sort out.

Being quite low in altitude, the heat had picked up considerably, although because of the arid conditions, at least there was no humidity.

Drink of choice for cyclists in Peru

I stopped off for a drink of Inca Kola along the way… yes, it does look like a bottle of wee. Tastes like Dr. Pepper though, which I have to say is a lot more pleasant. Not that I would know what a bottle of wee tastes like, erm…. Moving on…. 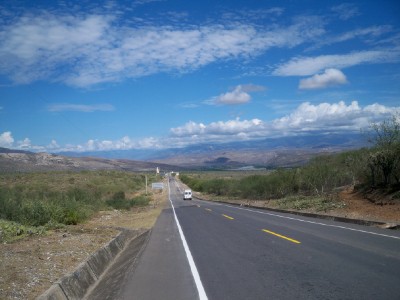 As I closed in on Bagua Grande, greenness reappeared, as did more rice paddy fields. Quite a few mototaxi drivers had pulled over to either wash themselves or their vehicles in the brown run off water from the rice terraces, and women washed their clothes in other run off areas.

In Bagua Grande itself, there was a selection of accommodation to choose from, although a little pricier here, averaging at the 20 Sole mark.

My daily chores, which revolve around food acquisition and the consumption thereof were easily seen to, with everything being within a block of the hotel.

In the evening, some amusement when the door to my room wouldn’t open when I got back from dinner. There was much messing about until they found a skinny kid to climb through the gap between the top of the door and ceiling.

Later on, I had to repair two punctures in the rear tyre which had a slow leak. Damn those burr thorn things!