Last Updated On November 29, 2019 by Dave Briggs Leave a Comment

Leaving Bagua Grande in the rain

This bike touring blog post was written in July 2010, when cycling from Alaska to Argentina.

Initially, when I left Bagua Grande, I thought I had made a mistake, as it was raining pretty hard. It was still warm though, so I pressed on, and when Bagua Grande was a couple of km behind me, the rain stopped.

It remained overcast for the rest of the day, but in hindsight, that was probably a blessing, as the temperature wasn’t too crazy. The road for the most part was sealed, but there were sections of rough stuff, and road works, where I was held up a couple of times, the longest being for a half hour.

Still, its all part and parcel of cycling through Peru, and it meant I could have a chat with the other people who were being held up.

Up until the longest road works delay at Aserradero, the road had been gently rolling, but once I was through where they were removing some boulders from the road, more serious uphill work began. 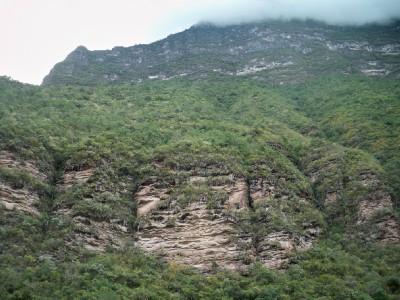 Over the next 29 km, I gained nearly 750 metres of altitude, whilst cycling through an ever narrowing valley, whose  sheer canyon walls thrust nearly vertically out of the ground on either side, whilst a raging river flowed on my left against the direction I was heading.

If that sounds like it was pretty awesome, let me tell you, it was, especially with the parakeet calls echoing through the air, and small flocks of them flying overhead.

That’s not to say it wasn’t tough work in places, and I stopped more than once to make sure the wheels were going around properly! 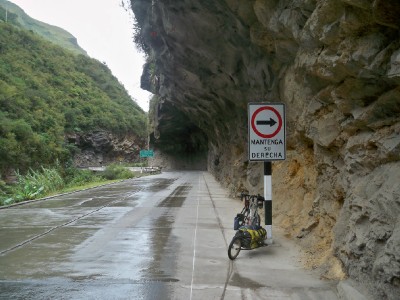 I was in Pedro Ruiz for mid afternoon, and after stopping to ask a mototaxi mechanic for some oil for my chain, I checked into a hotel which was overpriced, but had amazingly wonderful hot water.

I think I’ll head for Chachapoyas tomorrow, and try to source a map before heading off down even more remote roads.