With all the problems out of the way, it was time to get prepared to start the cycling trip! This was my last full day in Fairbanks before leaving for Deadhorse.

Last night, Christian, another ‘warm showers' cyclist showed up, so I got chatting to him this morning. He's just done the same trip that I intend to do, but in reverse, which took him 20 months, and so it was good to get a few hints for the road ahead. 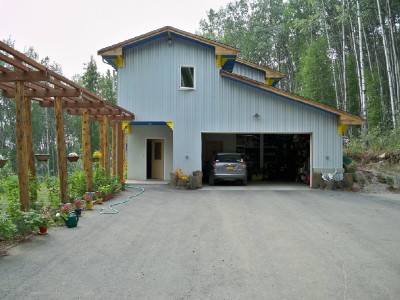 After breakfast, I visited the museum, which is on the university campus. Although small, it had some interesting displays, and I learned a bit more about the history of Alaska and the Fairbanks region.

Chatting with another long distance cyclist

On leaving the museum, I saw Christian again who was cycling out of Fairbanks and on towards New York. As all good cyclists do, we headed to McDonalds, and had a bite to eat.

We probably spent an hour in there chatting about the world in general and swapping stories. He's interested in cycling through Africa, and I was picking up valuable ‘road wiseness.'

When you've been on the road for a while, your instincts become finely tuned to getting the best bargains, cheapest places to sleep etc.

I am at the beginning of my trip, so it was good to listen to him and refresh my mind on how to cut costs on a bike tour. (ie – In McDonald's on Mondays, you get a free Mocha with anything ordered, and that the menu has an ‘economy' sub -menu, where a ‘McDouble' is the bargain at $1.50 each.). That, combined with the stealth camping tips, are going to prove useful.

We left McDonalds and went to Fred Meyers, where again Christian proved useful in pointing out some good foods and deals for the ever hungry cyclist! Stocked up, we went our separate ways, and I headed back to Chase's house.

In the afternoon, I packed all my stuff up, and its not as heavy as I feared it was going to be, although I am going to leave a few kilos of stuff behind and collect it when I come back through this way in a couple of weeks time.

In the evening, I treated Chase and Phyliss to a meal at a Cuban restaurant as way of thanks for their help over the last few days.

And so, tomorrow, I get up early and cycle down to the Dalton Highway Express office, where I catch the bus to Deadhorse – and that's where the real adventure begins!!