When I sat down to write about bike touring tools, I had every intention of wholeheartedly supporting multi tools for bicycle touring. However, as I researched and thought more about it, I came to realise that it was not as straight forward as it at first seemed. 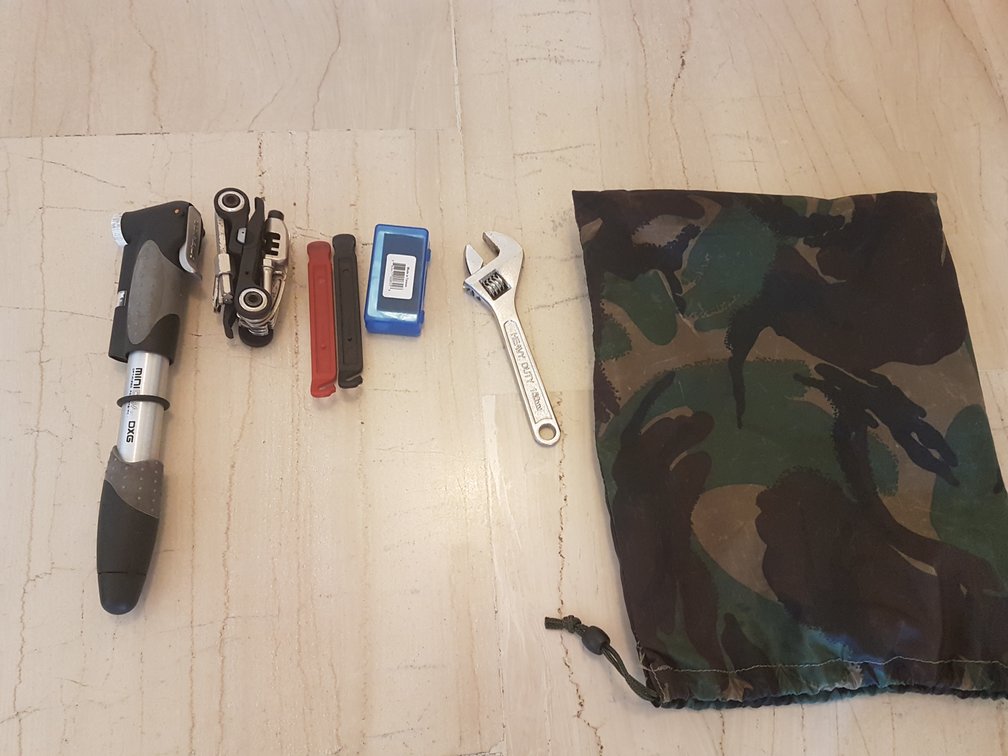 In the end, what started off as an article I assumed would be written pretty quickly, took more than 12 hours spread over a week to complete. I've included it in my bicycle touring tips guide as I think it is worthwhile to think about it.

So, let me start off by saying that on previous tours, I have always gotten by with bike multi-tools.

I fully accept they have their limitations, but as with anything, after a while you get used to what you have. And, as they have always worked for me (more or less), I never really thought any more about it until now.

Perhaps you might have expected better from someone who has cycled from England to South Africa, and Alaska to Argentina? Nah, sorry! 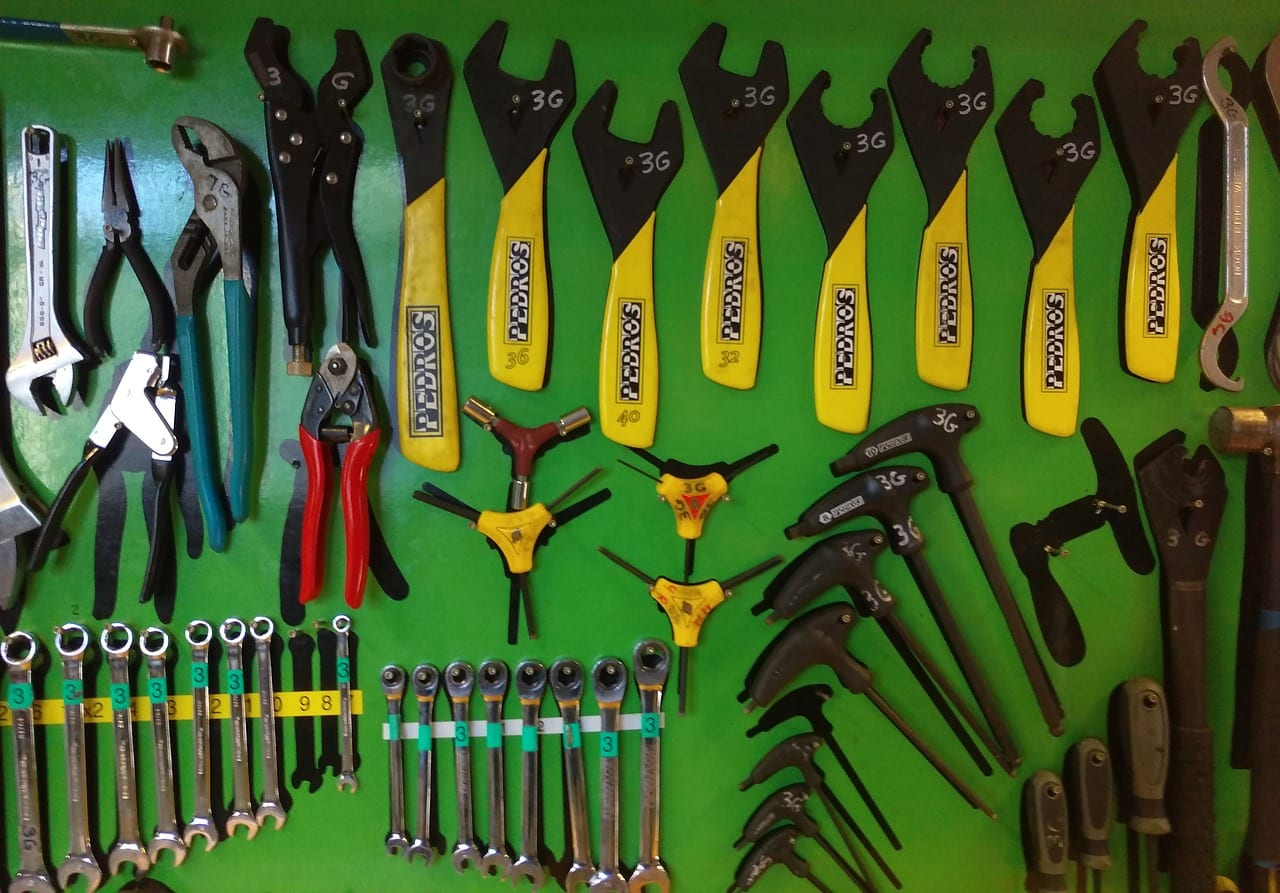 Writing this article has forced me to think a little deeper about bike touring tools. It's made me approach it unbiased, and with new eyes so to speak.

That's just as well, as it turns out that there are a lot of pros and cons to using bike multi-tools when bicycle touring. I would like to think that I have now considered most of them. With that in mind, please don't assume that the following statement was arrived at lightly –

“Whether or not you should take bike multi-tools when bicycle touring is determined by the frequency you believe that they will be used. If you expect to use them just occasionally or in emergencies, then they will prove adequate for the task. If you believe that you will use them on a more frequent basis for regular bicycle maintenance when touring, their limitations will soon become apparent. In this case, dedicated bike touring tools would be more suitable, either as a complete kit, or as individual items supplementing the multi-tool.”

Why is that though, and what exactly are the limitations of bike multi-tools when bicycle touring?

Perhaps it's a good idea then to compare a multi-tool with their full size counterparts. This way, I can explain my reasoning behind it.

Lets begin by choosing one to use as an example – Topeak ALiEN II Bike Multitool It's an extremely well made bit of kit, and one of the most popular on the market. 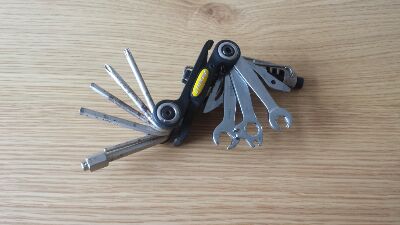 I own a couple myself, and happily take them on day rides and tours of up to a week. I have even used them on my previous long distance bicycle tours.

So, please don't let me give you the impression that they suck totally! They don't, it's just that in my opinion they are not best suited for extended periods of bicycle touring.

What's included on the bike multi-tool

The multi-tool has a pretty good range of Allen keys from 2mm up to 10mm, which covers all the basics that most people might need. On the trail and in an emergency, this can prove to be a godsend, but for regular bicycle maintenance their drawbacks become apparent.

The main complaint is that because of the way they are designed, they can be a bit fiddly to use. It's difficult to get a full turn of the key because of the plastic body on which the keys are attached.

The only solution, is to keep having to take the key out, and re-positioning it to start again. This proves to be quite annoying and inconvenient after a while.

Another drawback, is that after constant use (and I am talking upwards of 2 years here), the Allen keys have a tendency to 'round out'. That is far less likely to happen with a good set of dedicated Allen keys.

The decision then, is whether it is better to be inconvenienced by inadequate tools, or by the additional weight of a full size set. Personally, for longer tours, I have now decided that taking full size Allen keys works best for me.

Screwdrivers on the bike multi tool

The Alien 2 Multi-Tool also includes a Philips screwdriver, a flathead and a Torx key suitable for forks. I haven't got a problem with any of these, and the flathead is especially strong. They may still suffer from the plastic body getting in the way when turning though.

A not so useful bike multi tool knife

Perhaps the most pointless part of this bike multi-tools setup is the serrated knife. I have never had to use this, and can't really envision ever having to. It would certainly be awkward! For a tool designed to save weight this seems superfluous.

One part of the Alien 2 Multi-Tool which I do admire, is the chain tool. Some people don't seem to get on with it at all, but I actually prefer to use it than my job specific tool!

This might not be the same for all bike multi-tools, and I can easily imagine that the cheaper ones would never be up to the task. The Alien also has a compartment for a couple of spare links. This makes it ideal for fixing a broken chain when on a day ride or extended tour.

A chain tool is never going to see daily use, so there is some argument to be made about whether or not to carry a specific tool for this purpose.

The Topeak Alien 2 Multi-Tool has two tyre levers built into the plastic casing. These are fine for occasional use, but after a while, the plastic appears to become brittle. I've had two break on me now when changing tyres, and have decided that carrying better quality levers works best for me.

My American cousins might know these better as wrenches, and there are various ones to choose from on a multi-tool, including a spanner for the pedals. These are ok in an emergency, but no-where near suitable for regular maintenance. The pedal spanner is also prone to becoming lost (I have lost two out of two!).

On one of the spanners is a tool for adjusting spoke tension. I have a real problem with these, and would suggest that you don't use them unless there really is absolutely no other choice. Even mild tinkering rounds out the nipples on the spokes, and they eventually do more harm than good. A dedicated tool is far more suitable for the task.

In conclusion about bike multi-tools

The conclusion drawn from above then, is that full size tools are better to use. This isn't really a massive revelation, but it does bring us back to that eternal bicycle touring conundrum. Is reducing the weight we carry more important than the convenience and comfort that the extra weight carried provides?

In the case of using bike multi-tools on extended bicycle tours, I believe that carrying the extra weight in the form of more suitable tools is better. The bicycle is your beast of burden, and keeping it in optimum working order will make the bicycle tour that little more easier.

Tools suitable for the task help you to do that, and are therefore worth the extra weight that is carried. I'd say a bicycle multi-tool is great for short tours of around a month. If you're planning an epic journey cycling around the world, it might be better to take some more dedicated tools and accept the extra weight.

Some of the most frequently asked questions about essential tools to take on a bikepacking or bike touring trip include:

What tools do I need for bike touring?

I take different tools with me for each bike trip, depending on what bike I am using, the length of the cycle tour, and the potential of available parts and repair shops. The further off the beaten path I cycle, the bigger my bicycle tool kit is likely to be.

What tools should I keep on my bike?

You can keep a compact bike multitool in a small under saddle bag which will contain most of the accessories needed for all but major repairs on a bicycle. In addition, it's highly advisable to take along a patch kit, tire lever set, and small pump.

Do I need a chain breaker when cycle touring?

A chain breaker is included with any quality multi tool such as the Alien II, and so is easy to take with you. Knowing how to use all the tools is also important of course!

What every cyclist should carry?

Tire levers, a puncture repair kit, and a small bike pump are the bare minimum of bike tools to take on short rides. When on longer tours, you might also consider a mini tool that includes spoke keys, a chain breaker tool, flat head screwdriver and Philips screwdriver accessories as well as Allen keys.

You might also find the following articles about bicycle touring gear and equipment of some use. 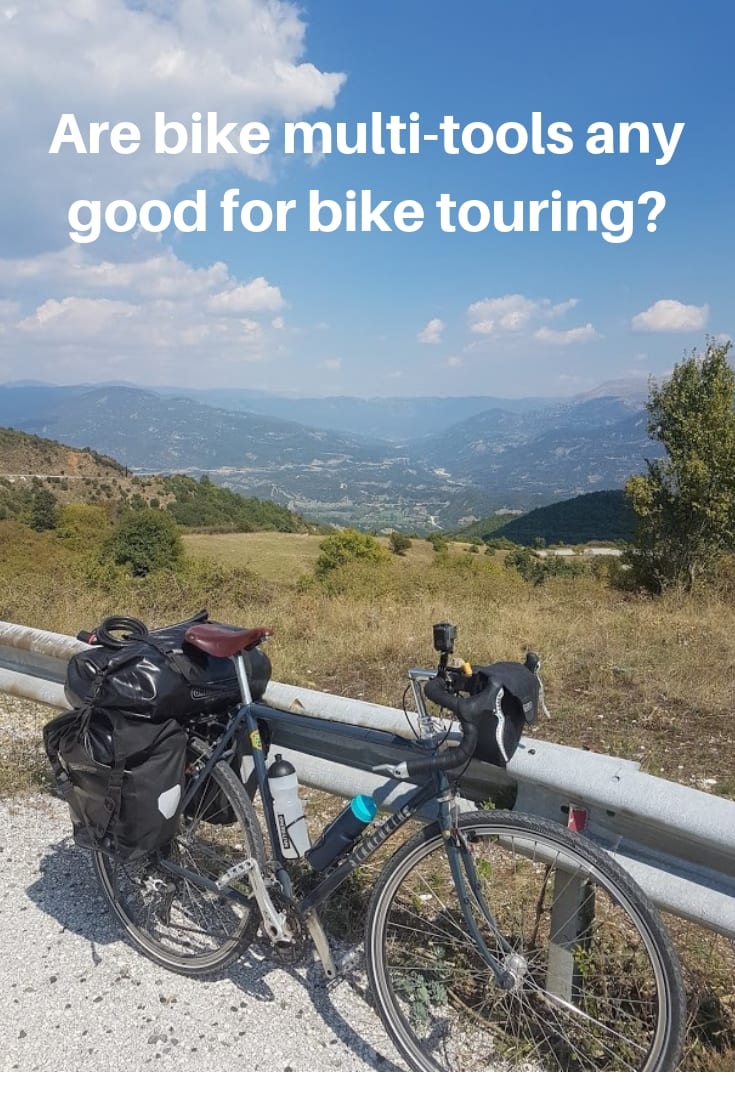