Originally, I was going to stay at Venice Beach, but on arrival they said that no bikes were allowed. Just one other adventure cycling from Alaska to Argentina!

Today's cycling was a day I had not been looking forwards to for a while. Cycling through large cities in the Western World is not really appealing, but not for the reasons you might think.

In the Middle East and Africa, you can pretty much cycle on any road, be it a track or main highway, but in the Western World, bicycles are not allowed on certain roads.

This means coming off of a road which would have been the most direct route to take cycle paths and back roads, often unmarked, or worse just badly marked.

Admittedly, my cause might be aided with some form of map, but there we go.

Initially, there was no problem at all. Highway One went through Malibu, and then approaching the outskirts of LA, veered off onto a bicycle path which meandered through the beach front. 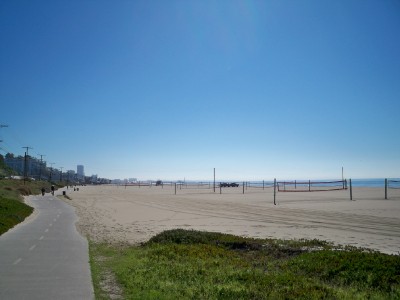 I’d pre-booked a hostel in Venice Beach, and so headed there. It looked a little like a cross between Great Yarmouth, Carnaby Street and a convention for the homeless.

I found the hostel, Hostel Cote, and went to check in, which is where things went wrong.

The girl on reception said that no bicycles were allowed, this, despite the fact that it was the first thing I made sure of when I phoned to make the reservation.

To say I was pissed off was putting it lightly. I was quite looking forwards to Halloween on Venice Beach, but it wasn’t to be.

Everything for a reason though, whether we know about it or not, and as it was midday, I decided to make more ground.

Cycling out of Venice Beach

The bike path from Venice Beach went on for another fifteen miles or so, and after that I had to ask directions several times to point me the right way.

I bumped into two British cyclists at a fish and chip shop (obviously), and after swapping tales, I carried on, eventually picking up the PCH (highway one).

Passing through Torrance, I noticed a motel which looked a little bit rough around the edges, so checked it out for prices. At 50 bucks for the night it was job done.

Note – While I think about it, I was talking to some people earlier today, and explaining where I had started my trip.

Their reply was ‘Did you swim with the bike from Alaska’. Now, at first I thought it was some strange American humour I wasn’t getting, and then it suddenly dawned on me.

When The USA is shown on maps, it shows the mainland, and Alaska and Hawaii separately, without Canada in between. This guy, and he wasn’t the first through the trip, obviously thinks that Alaska is an island. Education at its best!!