Last Updated On August 11, 2022 by Dave Briggs Leave a Comment

This bike touring blog was written during my bike tour from England to South Africa. It covers the section of cycling from Mbeya in Lolongwe in Malawi.

This bicycle touring blog update was written in 2007, but reformatted in 2020. The content of my travel experience cycling the route from Mbeya to Lilongwe remains the same.

Distance from Mbeya to Lilongwe

There are a couple of different routes you can take between Mbeya and Lilongwe. The one that I cycled went along the edge of Lake Malawi, and was about 820kms.

I had a good breakfast, and then set off for a new country. The first hour or so was tough, uphill work. Then came a couple of hours of downhill. Quiet roads, beautiful surroundings, clean air- what more do you need?

Another hour of climbing up to the town of Tukuye followed, and then it was pretty much downhill all the way to the border. Some black market money changers gave me the usual spiel – there's no bank on the other side, nowhere to change your money, blah blah blah.

Sorry boys, I've crossed a few borders in my time, and I know you're talking bollocks!

Got stamped out of Tanzania, and then crossed the border into Malawi where I was given a free visa.

Changed my money in the exchange building (you know, that one they said wasn't there), and was on my merry way.

Well, not quite so merry, as by this time I had already done a hundred kilometres, and still had another 45 to go.

There was a slight headwind, a bit of an gradient going the wrong way, and somebody had also turned the temperature up by 10 degrees.

A bit of a struggle getting into Karonga, but I did it in the end, and made my way to the Lakeshore Campsite, withdrawing some cash from a Visa card taking ATM along the way. Ate and drank. Bed.

A very hard day. Headwind, slightly uphill, 1 puncture. When I arrived at the campsite I was utterly exhausted and knew that I needed a day off, as I had been on the bike everyday since leaving Dar Es Salaam. 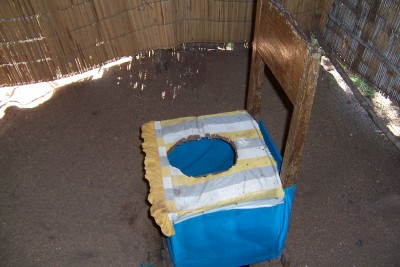 What a perfect place to have a day off! The campsite was basic, but situated right on the lake shore, and the meals cheap, simple and filling.

The family who runs it are lovely, and we had some good chats as I turned into a bicycle mechanic and fixed their bikes.

There was only one other person staying at the camp, an Australian motorcyclist, who has some interesting stories, as he's a yacht captain by profession.

He was a really sound bloke, and it's good to talk to someone who shares similar opinions – he didn't rate Ethiopia either! I gave my own bike a service as well, swapped my bicycle seat for a local one and repaired an inner tube.

The lake was warm, so I went for a swim, and generally farted around. What do you think of the class toilet seat? Beats squatting over a hole!

It was a good day off, and although I was tempted to stay one more, I really have to be making tracks if I want to finish this trip by the end of May.

Just because today was easier than I thought it was going to be, didn't make it an easy day. The first hour and a bit was pretty brutal work, all uphill on extremely steep roads. Then came a slight descent into a valley, before the road again worked its way steadily upwards.

This wasn't too bad though, because a handy tailwind picked up, and I zoomed along at 30 kms for a couple of hours.

The last few kilometres saw me flag a little, but it was a very long day, and by the time I'd finished, I'd clocked up over 140 kms.

The hostel was ok, although pricey, as it was geared specifically towards travellers. There was one other person staying there, an Austrian girl who had lived and worked over on the west coast of Africa for a few years.

We had quite a few stories to swap, and talked late into the night whilst watching Notting Hill. I'd forgotten just how dull that film was.

There was a huge thunderstorm and torrential rains at about three in the morning, and my tent started to soak up water, as I don't have a separate ground sheet.

I went to sit under a porch for a while, and when the storm ended, I went back to the tent and managed to get a few hours sleep.

Over breakfast, I decided that a shorter day was in order, and so just cycled 50 kms to Nkharta Bay. It was mainly downhill, although there were a few sharp ascents to keep me on my toes.

I booked into a banda (picture a bamboo hut on some rocks only a few feet above the lakes waters), which was quite relaxing. This is the life ! 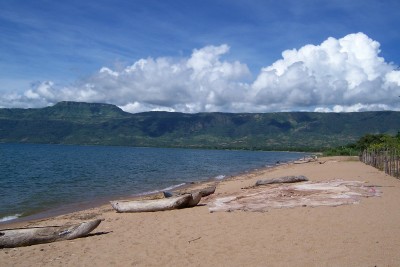 I retraced my way back up to the main road, and then followed it along the shore of Lake Malawi, and through the countryside. A pretty uneventful day, apart from when I was cycling through a rubber tree plantation.

A few Malawians, the astute business people that they are, saw me on my bicycle, and instantly surmised that I need to buy a large, rubber ball the size of a beach ball. Nice one chaps, thanks but no thanks. And that was about as exciting as today got!

My destination was going to be Kande Beach, and although I looked for a signpost as I approached the small settlement of Kande, I couldn't find one.

Before I knew it, I was a few kilometres away and at the bottom of a hill, and as I couldn't be bothered to cycle back up again, I carried on. With 120 kms in the bag, I reached a very expensive lake shore lodge called Ngala Beach and called it a day.

Had a full English breakfast, and then hit the road. Uneventful stuff, and I reached Nhkotakota for 12.00. Stocked up in a supermarket, and checked into a cheap resthouse which should put my budget back on track.

At eight at night, I got a knock on the door, and two guys tried to sell me some small, wooden elephants. Why don't they try to sell something useful?? If they had been selling mossie repellent, I would have snapped it up, as I've been hammered by them over the last couple of days.

Today, I was Zidan once, Beckham once and Bartez twice. Must be the haircut.

Not a lot to report from the road, just the usual amount of ‘Hello' and ‘Good morning' as I passed by local cyclists carrying random stuff on the back of their bikes.

Where the women carry things on top of their heads, the men pile as much as they possibly can on the back of their bicycles. The guy cycling with a live goat strapped on the back of his bicycle got today's crazy man award though.

I reached Salima in the afternoon, changed some cash, bought some water and booked into a hotel.

And I was just thinking yesterday how lucky I had been with the weather so far, in that the rains hadn't affected me too much, only that I shouldn't write it down, as I would be tempting fate. It would seem that even thinking about it was tempting fate, however!

From 5.00 am until 9.30 am it rained a proper rainy season rain, which was too much, and finished too late for me to move on today. So, a day off in Salima.

Talked to the crazy owner of the hotel. I can only hope that because of his extreme views on dictatorship and the death sentence he never gets into power himself! Hired a DVD and ripped it onto the laptop, ate a bit and generally did not a great deal.

The next day, I intended to reach Lilongwe.

It rained a bit in the morning, but not enough to stop me riding, so I left at about 8.00 after a good breakfast. I knew that I would have to be heading uphill towards Lilongwe, and I was not to be proved wrong!

Still, I made it in the end, and found Kiboko camp, which is where I'll be staying for a few days in Lilongwe city.

The Aussie couple, Ross and Christine, who dropped by my hotel in Dar Es Salaam and are also travelling by bicycle, have been staying at the campsite, although they leave tomorrow.

It was good to see other cyclists, even if it is only to prove that I am not the only crazy person on two wheels!

They are heading to Zambia tomorrow, and said that they would try to arrange a visa waiver for me with a campsite on the Zambian side. If I have to pay for a visa, it's going to cost me 65 USD – WHAT!!!!

I've decided to stay here until Wednesday morning, and then leave for Zambia which I should reach in one day. That way, if my free visa is waiting for me at the border, then its a good result, and if it's not, then I only spend one extra day in Lilongwe than I had planned.

The camp site is a great place, and has just been bought by a young English couple, and I wish them good luck with it. The people here are friendly, and I had a few beers last night as I don't have to cycle tomorrow.

So, a couple of days off here in Lilongwe is on the cards, and then a big push of about ten days through Zambia until I reach Victoria Falls.