Last Updated On March 16, 2021 by Dave Briggs Leave a Comment

In 2006, I cycled through Syria as part of my bike tour from England to South Africa. This blog post covers cycling from Antakya in Turkey to Damascus in Syria.

Cycling from Turkey to Syria

Adding this paragraph in 2019, I look back on my time cycling in Syria with fondness. It was one of my favourite countries to visit on my long distance bike tour, and one I really felt welcomed and safe in.

When the civil war broke out, I could barely believe my eyes. What ever happened to all those fantastic people I met and places I visited?

I often talk with people who ask me what it was like cycling in Syria. I try to explain that this was a country not too dissimilar to perhaps my new home of Greece.

They can't relate though. All they see is the images of refugees and cities in rubble. But that's now. In 2006, I experienced something much different….

Cycling from Antakya to Aleppo

I got an early start, as I had over 100kms to do and of course the border crossing into Syria. The cycling was pretty easy, and I passed through acres of cotton fields, where the workers seemed to do more waving at me than actual cotton picking. I must have said ‘Hello' to people over a thousand times today!!

As I approached the Turkish border, I saw maybe a hundred Turkish lorries stood still in a massively long queue waiting to go over. Coming from a warehouse background, there is only one thing more amusing than an impatient, delayed, helpless lorry driver, and that is a hundred of them!

The Turkish side of the border was a shambolic affair, which involved visiting different windows to get my exit stamps. The Syrian one was more straightforwards, although I had something written in the notes section of my passport – not sure what that means as its in squiggles ( I mean Arabic).

Excellent stuff. I was a bit concerned about how I was going to read the road signs if they were in Arabic, but they are also signed in English which is handy for me! Still haven't got a road map, but never mind.

I stopped off at a dodgy roadside cafe for all the things you are not supposed to have – salad, under cooked meat, water, and then carried on to Aleppo.

How far is Aleppo from the Turkish border?

It was about 30 miles or 48 kilometres from the Turkish border to Aleppo in Syria. The cycling seemed easy, perhaps with the excitement of being in yet another new country on this cycling trip.

The immediate road leading into Aleppo was a bit odd, as it had a Union Jack every three hundred metres, alternating with the Syrian one. Not sure what all that was about, but I can only assume they knew I was coming.

I was going to take a photo, but there was a military base on the other side, and I didn't really want to get arrested on day one.

I somehow found the district where the cheap hotels are located, and got myself the bargain of the trip so far at the equivalent of 2 English pounds.

The room was possibly the smallest one that I have ever stayed in, and the graffiti described it as ‘the box' or ‘the coffin'. My favourite writing on the wall said – ‘Tonight I won't have any dreams, because there isn't any room for them.'

Because it was Friday, a lot of the shops and souqs were closed. I visited the museum which had some interesting pieces, but the building itself looked like it would fall down at any moment.

Messed around on the internet, and unsuccessfully attempted to buy a map of Syria again. Although there is only a handful of roads linking the few main cities and towns, it would be nice to know of smaller towns laying in between.

Cycling from Aleppo to Hama in Syria

It was an overcast day, and rained for a little while, but in actual fact the cycling conditions were perfect. The road was of excellent quality, and the 150 kms seemed to fly by.

I reached Hama for what I though was three, but later found out that the clocks had gone back an hour. Booked into the Cairo hotel in Hama which was 350 Syrian pounds for a good quality room.

So far, Syria has proven to be a very cheap country, although it did cost 80 pounds for two pieces of paper to actually get here at all. Still no map.

Cycling from Hama to Homs

For some reason, todays 60 kms seemed harder than the previous days 150. I booked into a relatively expensive hotel, but I did manage to pick up a WiFi conection from somewhere.

I'm not sure what the punishment for hacking into wireless systems is in Syria, but I'm guessing its not nice.

I was in two minds which route I should take the following day. Damascus was only 150kms away, but if I headed inland, I would be able to see the ruins at Palmyra, although it would add four days and a lot more kms to my journey. (I've actually forgotten what a map looks like now.)

Cycling from Homs to the Middle of the Desert 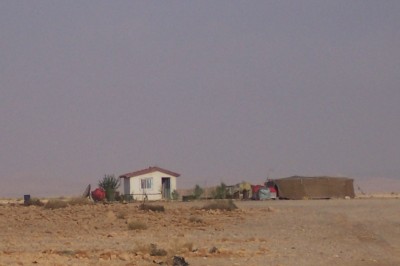 It was a day of two very different parts, so lets get the cycling section out of the way first – A tough, tough day. 130kms through the desert with the wind blowing against me all the way.

No shelter, no towns, nothing. Just sand and rocks. Not altogether pleasant, but what doesn't break us makes us, and all that bollocks.

If I had left an hour or two earlier I may have been able to make Palmyra in one day, but the sun started setting at 4.30, and I was still a long way short.

This is where the second part of my day kicked in. I noticed a small sign saying ‘gathering station' and pulled over to take a look. I'm not sure what the place was about, as the only gathering that was happening was by a few rusty pieces of road working machinery gathering dust.

There was a scruffy looking herbert of a caretaker there, so I asked if I could wild camp on the grounds for the night in a mixture of English, Arabic and sign language. He said it was ok, so I set the tent up, and we shared a meal.

Then a truck turned up, and the driver started talking with the caretaker. There was a flurry of excitement and mobile phone usage, after which another two guys wearing red and white tea towels on their heads turned up on a motorbike.

Another conversation in English, Arabic and sign language led me to believe that camping in the gathering place was not good enough, and that I should follow them to their encampment.

It was pitch black by now, but what the hell. I packed the tent back up, loaded my bike, and followed the motorbike for fifteen minutes across the desert sands in the dark, after which we arrived at their compound which consisted of a larger tent (presumably where the women were, safely locked away from me), and a more solid structure which was basically a small room with a TV in one corner. (Electricity via a generator).

This small room was evidently the men's room, where we spent the night talking, eating and drinking chai. Conversation was difficult, as I only know a handful of Arabic words and they knew no English, but we muddled through ok, and I stayed the night there. Nice chaps these Beduin fellas. (They didn't have a map though)

After a round of chai, I waved goodbye, and cycled back out across the desert to the road. It was only 50kms to Palmyra, but it seemed quite hard work, although the previous evening lifted my spirits.

When in Palmyra, I checked out a couple of hotels and booked into the Citadel hotel, and who should be there? Rainhard the German cyclist who I had first met when leaving Istanbul. It was good to catch up with him using our unique mix of German and English. Did a lot of eating. 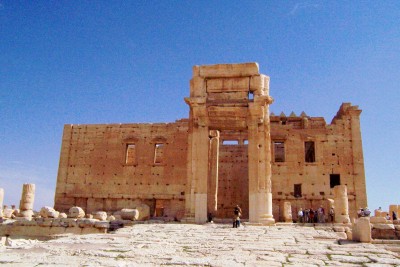 Today was a day off from cycling, and I spent it sight seeing around the ruins of Palmyra. The temple of Bel was the standout point, although some of the outer walls had been reconstructed horrendously.

The whole city only existed because of the oasis, and was a vital point on the silk road for trading caravans, and it must have been quite an imposing sight 2000 years ago, after crossing the desert for days.

Spent the evening chatting with a couple of German girls (who initially thought I was German because they heard me talking yesterday – I've never been so insulted!!) and a Scottish guy called Eric who I met in Aleppo.

Cycling from Palmyra to the Bagdad Cafe

Had a good breakfast and got off to a relatively early start, where it was back to the barren, featureless desert. At three in the afternoon, I came across a cafe in the middle of nowhere called the Bagdad cafe with a camel tied up outside.

Got chatting with the owner, and kipped there for the night, where I watched BBC world until the generator ran out of diesel. 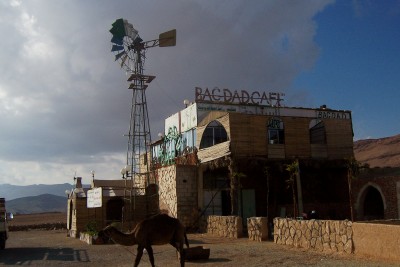 Cycling from the Bagdad Cafe to Damascus

I left Sultan (yes, that really was the owners name) at the cafe and got off to another early start. With over 160kms still to cover to reach Damascus, this was always going to be a long, tough day.

The initial four hours was very hard work, over continuous hills (ney, mountains!) and with a hugely strong wind blowing me to a standstill at times.

The next six hours weren't any easier, there were just less hills.

It was getting late as I approached Damascus, and for the last 10 kms I was cycling in the dark along the motorway as I don't have any lights, which I don't recommend.

On the outskirts of Damascus, I stumbled (literally) upon a campsite, and dived in there for the night.

Time off in Damascus Syria

I moved from the campsite into a hotel in the city centre, which involved the normal fun and games with the traffic. I will stay here for three nights before heading out to Jordan.

The little area around the hotel has some cheap eats and internet, so perfect! Bought a couple of pirate DVD's for a pound each – X-Men 3 and Superman returns.

Had breakfast in a cafe, and then walked over to the national museum. It was ok, but a bit higgledy piggeldy (I've always wanted to write that phrase down, but I am not convinced I've spelt it right).

Used the internet for a bit. The current age of  War of Empires is coming to an end, and it looks like I will get the Empire Destroyer title, and an old clan mate Ramet should win the age outright. Computer geeks of the world unite!!