After a couple of days rest in Leon, it was time to resume cycling across Nicaragua. Today, I would end up staying in a town whose name I still don't know. 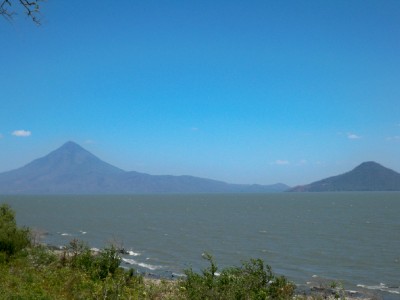 Cycling out of Leon, Nicaragua

Finding my way through the one way streets of Leon and out onto the highway was pretty easy. Once there, however, I was reminded almost immediately of the strong winds which had plagued me cycling into Leon.

This reminder came in the form of a tremendous headwind which blew constantly and unhindered across the open farmlands of Nicaragua for the next four hours.

To start off with, I made good time against it, but inevitably it gradually started to sap my strength.

For non-cyclists its often hard to imagine cycling with a fully loaded touring bike, and the energy involved just to move the thing on a normal day. Combine that with a wind I could barely stand up in, and it goes someway to explain how I drank over 10 litres of water just whilst cycling.

I passed by a great lake near the Nicaraguan capitol of Managua, and the city itself I basically skirted. Thankfully, here the wind died down, but my next problem was a monster hill climb of over 650 metres in altitude in a little under 13 kms.

A bit of a bastard, that one.

To make matters worse, there were a few false summits towards the end – There´s nothing like having your hopes raised only to see them dashed right in front of your eyes time and time again !!

At the eventual top, lay the town of El Crucerio, where I had planned to spend the night. The one hotel there looked promising, especially with its ´bikers welcome´sign, but the 20 dollars they wanted was beyond my budget. I was pretty tired by this point, but gambled that it must be mostly downhill for the next few kilometres, which thankfully, it was.

I rolled into a town whose name I am not sure of (and I don´t have a map so couldn't check), and went straight into Auto-Hotel Kassandra. It was one of those price-per-8-hours places, and before I embark on a moment of Daveness, I will add a valid observation.

Although places like this would be frowned upon in Europe, they do serve a purpose. Ok, sure, some illicit affairs take place in these establishments, and some are nothing more than thinly disguised brothels, but they are also used by genuine couples.

If you imagine sharing a tiny house with an extended family, opportunities for privacy are rare, so 10 dollars for 8 hours is not a bad deal.

Ok – That moment of daveness you´ve been waiting for.

Staying in a Love Hotel in Nicaragua

Chain hooks were non-existent, and the bed did not afford any secure handcuff points.

Talking of the bed, it was only big enough for two people, so entirely unsuitable for me (:p), and although the super-thick plastic sheet over the mattress was a good idea from the managements point of view, it would have lent itself to some pretty nasty burns.

I liked the food serving hatch which would have been just the job for pizza deliveries, but by far the best feature was the rocking chair underneath the fan.

Fed and watered, I dozed off easily at night to the sound of some amateurish grunting drifting through the air.