A second day off in Leon, Nicaragua. On this day, I did a little more bicycle maintenance and some chores to prepare for the road ahead. 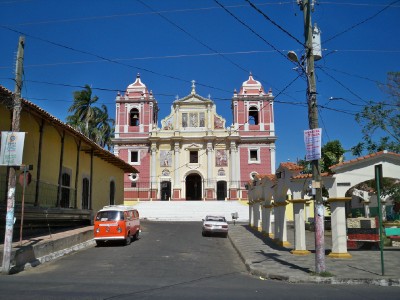 I took another day off today, as I didn't feel 100 percent rested, and still had a few outstanding chores to do. More bike problems to solve!

I spent an hour trying to find another spare tyre for the Bob Yak Trailer, but had no great success there. The wheel size is available, but the only tyre widths  are far bigger than that which I have on now. So much so, that I am not even sure that they would fit on the rim properly.

The current tyre I have on, has been on the Bob since Alaska. Although quite surprisingly it looks like it may have a few thousand kilometres more left in it, I would cycle more efficiently with a new one.

I have been carrying a spare, also since Alaska, which was never in the best shape when I got it, and its worse now. It would be useful only in a real emergency, so I would prefer to solve the problem before it arises.

Besides tyre hunting, I posted some more odds and sods back to England, stocked up on supplies, and checked and answered a bunch of emails (I do get around to answering them, just I can´t answer them all right away as much as I would wish too, apologies).

One of my websites  earned me ten dollars today – If only it could do that every day, I would be a huge step closer to being able to travel solely off the money earned from the internet. Still wishful thinking at this stage though!

Whilst on the net, I realised that this coming week is Semena Santa, which is a holy week and a big holiday period. As such, I have had to adjust my onward plans slightly in order to avoid both completely booked out areas and raised accommodation costs.

I plan now to cross into Costa Rica as soon as possible, and head to the town of Liberia, where I will wait the holiday period out. As Liberia is not by the coast, I figured that there will be plenty of accommodation and that they will not raise the prices.