Back on to the bike after two weeks rest, and I cycled from Mulege to Buenaventura in Mexico. It took a while to get back into the swing of things!

Cycling out of Mulege

Today, I hit the road again after spending a great couple of weeks R and R at Bills in Mulege. During that time, I hadn’t even so much as looked at the bike, and it felt strange at first getting back on it.

It was a short days cycling of 30 miles, so I left at midday. There were some hills, but I didn’t really notice them as I was concentrating more on getting back into the swing of things. 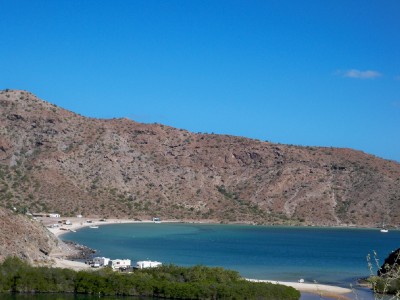 I soon passed the beautiful bay of  Santispac, and then went on to Buenaventura.

There was a restaurant down on the beach where I could camp. It was a bit windy at first but it soon died down. They had WiFi there as well which was a result.