Part of my bike tour from Alaska to Argentina. Today, I cycled from Rio Hondo to Chiquimula in Guatemala. This is my blog from the day.

Today got off to an odd start when I was woken at 05.30 by a rooster announcing the start of the day. Nothing unusual about that, until somebody emptied an AK-47 into it.

Well, that’s what it sounded like. I thought it might be a power transformer blowing, but the sound went on too long for that, and until I am presented with evidence to the contrary, I am going with the AK-47 theory. Besides, the rooster didn’t make another sound. 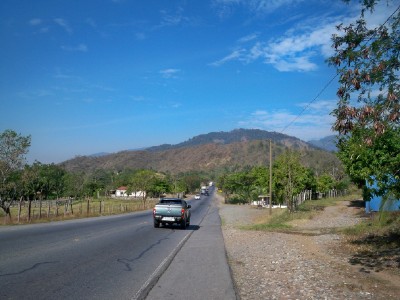 I left a bit later at gone 09.00 as I only had a short day in mind. That said, it was a pretty gruelling one, despite it only being 40 kms.

The road deteriorated badly, traffic was intensely spewing out plumes of black smoke, the hills were steep, noise constant and a very strong wind blew against me.

So when I entered the outskirts of Chiquimula and was greeted by a large, modern shopping mall, I was taken quickly by surprise.

I soon recovered however, and dived straight into McDonald's. The staff there must be fed a constant diet of red bull, because I have never seen so much energy and enthusiasm!

I found myself a hotel, and as I had some quetzales left over, decided to treat myself  in the supermarket – strawberries, yoghurt, sardines, muesli, fanta and pot noodles. Keeping it real as always!