Last Updated On October 9, 2019 by Dave Briggs Leave a Comment

This Ecuador bike touring blog post covers the day's ride between San Gabriel and Ibarra. Part of my Alaska to Argentina bike tour.

Cycling out of San Gabriel

My stomach wasn't 100% when I left San Gabriel in the morning, but at least the toilet visits had ceased, which was a relief. 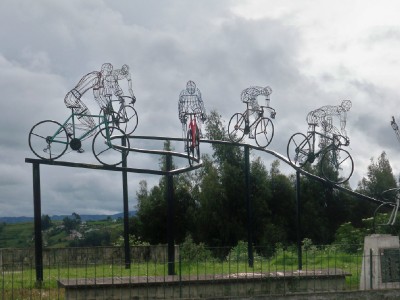 Leaving San Gabriel, I cycled past this sculpture. Its so refreshing to cycle in countries where cycling is taken seriously as a sport and leisure activity. 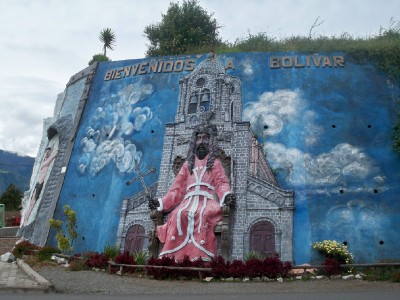 Bolivar, the next town had a series of prehistoric mammoth sculptures, and this religious one as well. Not quite sure where the connection is there !

Cycling the mountains of Ecuador

The hills were rolling for the first 10 km or so, and then began a huge downhill section. The views were stunning once more. I felt like a microscopic speck of cycling dust moving between the huge mountains on either side of me. 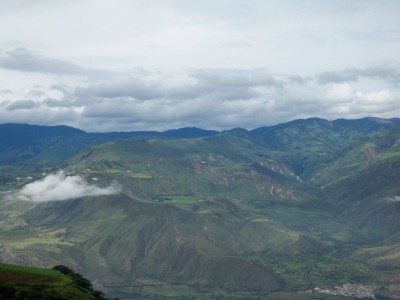 Eventually, after losing nearly 1800 metres of height, it was time to begin the ascent back up again. Although the air is cool and crisp at these heights, I was soon sweating like a good un.

Initially, the inclines were gentle, but they became more demanding as the road went up a series of switchbacks. 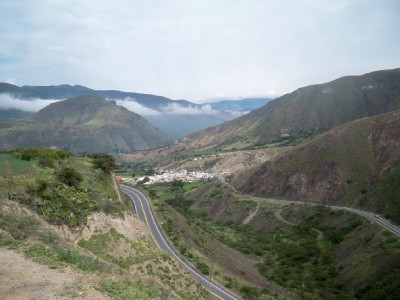 It was tough work at the end, but the town of Ibarra materialised sooner than I expected, which was great, as the clouds had started to darken.

I took a room at a relatively expensive hotel at 17 dollars, which has hot water, wifi and included breakfast, as I really ‘ be bothered to cycle around finding somewhere else.

As it turned out, I needed the access to the internet, as a prospective buyer for advertising space on my website became an actual buyer of advertising space, and I had to set the code up. 180 dollars for the year bought them a site-wide a banner.

Tidying this post up in 2019, I still remember this as one of those A-Ha moments when I saw it might be possible to support my bike tours with income online. Little did I know that 9 years later, I would be working full time on this blog.