Last Updated On July 22, 2019 by Dave Briggs Leave a Comment

Today I cycled from Tamarindo to Playa Ostional in Costa Rica. A tough section of unpaved road, made harder by heat, humidity, and hills.

I knew that today was going to be a tough one, and I was not to be proved wrong ! Most of the day was spent on rough roads, apart from one small section where there was a most welcomed bicycle path for 10 kms. 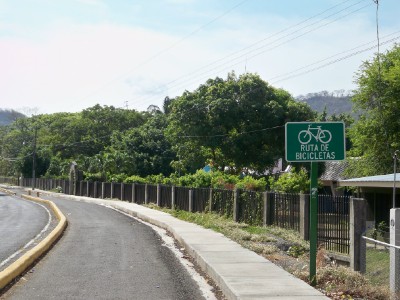 With a little air out of the tyres, I made reasonable time over the gravel roads, until the last 50 kms, when the way was punctuated with short, steep ascents and descents. It wasn't an easy road to navigate for motorists either. The truck driver managed to turn his truck over on the road as shown above.

The hills combined with roads were pretty agonising, especially in the 37 degree sun. For the first time since cycling the Haul Road in Alaska I was unable to cycle up the two last hills, and had to push. The bike just wouldn't get any traction, and I was unable to get beyond half a pedal turn before the rear tyre slipped from under me. I wouldn't entirely blame my setup, but it also wasn't the first time I thought that panniers were a much better idea than trailers for bike touring!

I eventually made it into Playa Ostional at just gone 13.00 ish, completely in the red zone and utterly exhausted.

I saw a sign pointing towards the beach saying camping, and for 4 dollars, I ended up camping right by the beach.

Pretty much in shit state, I spent the afternoon shuffling around like a zombie, before eventually collapsing into sleep.