After an extended stay in Liberia, Costa Rica, it was time to start cycling once more. Today, I cycled from Liberia to Tamarindo in Costa Rica.

It felt good to be back on the road again, and although the traffic was heavy near Liberia, it died down a few kilometres out.

The road was predominantly flat, which was probably a good thing given that it was extremely hot even by 08.00 in the morning. 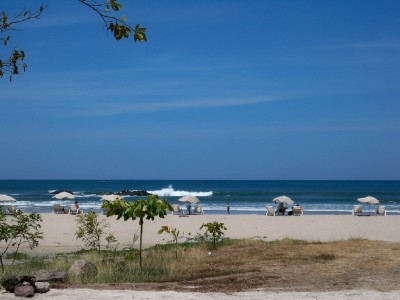 I arrived at Tamarindo within three and a bit hours of cycling. The town itself is a pure tourist resort, filled with pink skinned Americans – In fact, they were burning so well, they would have given the English a good run for their money.

The hostel I ended up in was 10 dollars a night for a dorm room, but I was the only one in it, and it had air-con to boot.

Its tucked away off the main drag, and is pretty laid back if a bit rough around the edges.

Wonderfully, they also had a kitchen, which I made full use of  !!