Planning to spend some time in Paphos? Here’s some of the best things to do in Paphos, Cyprus including how to see the archaeological sites, enjoying urban tours, and experiencing outdoor adventure! 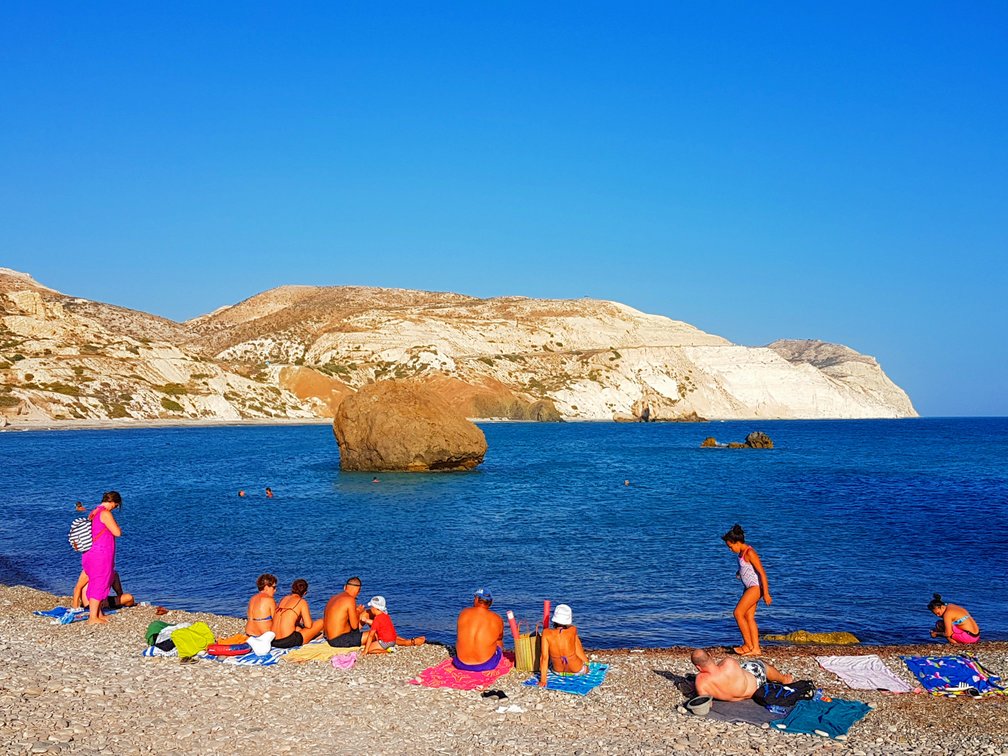 About Paphos in Cyprus

Paphos is one of the most popular tourist destinations in Cyprus, particularly with visitors from the UK.

Whilst there is an element of ‘British seaside meets Greece' about the tourist infrastructure, it pays to dive a little deeper.

Look past the surface, and you'll find you're surrounded by ancient history, natural wonders, and of course great beaches!

Situated on the western coast of Cyprus, Paphos is a harbour town that like the rest of the country boasts churches, archaeological sites, mosaics, white-sand beaches and amazing views of the land and the sea.

What isn't there to love?!

What to do in Paphos

In this Paphos travel blog, I'll show you the best things to see and do. There's also some additional information you may find useful when planning your vacation.

Here's an index of the content of the blog post, with links to take you directly to each section. Alternatively, just read it from start to end – it won't take 5 minutes!

Top things to do in Paphos Cyprus 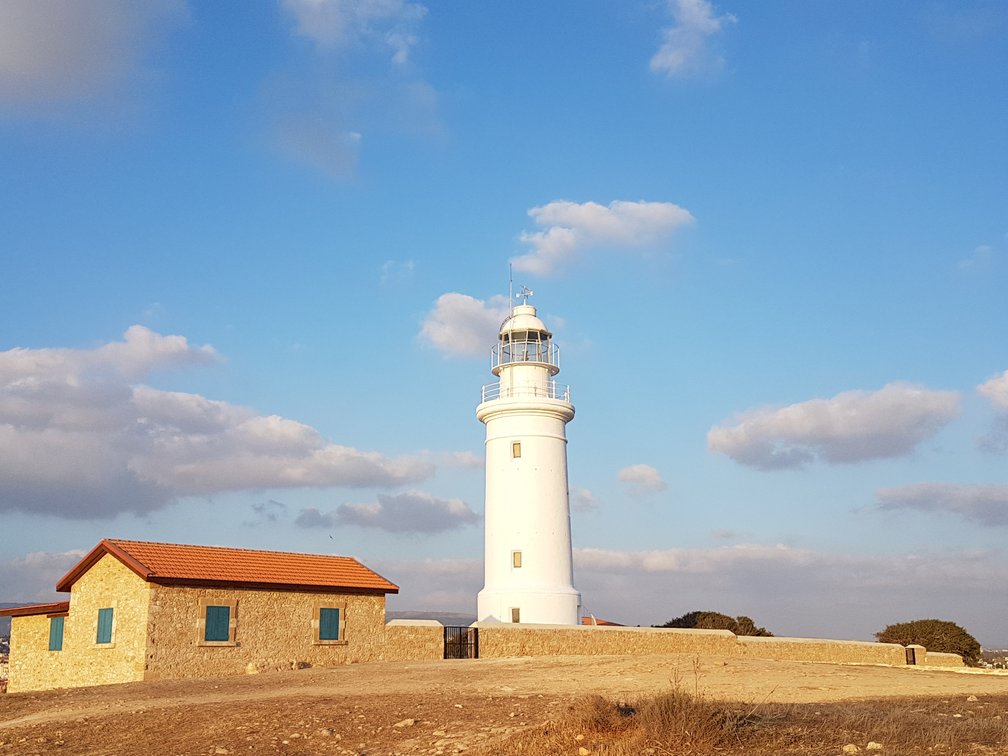 Top things to do in Paphos, Cyprus

If you only visit one archaeological site in Paphos, it should be the Tomb of the Kings. This remarkable collection of underground tombs are carved out of solid rock, and date back to the 4th century BC. 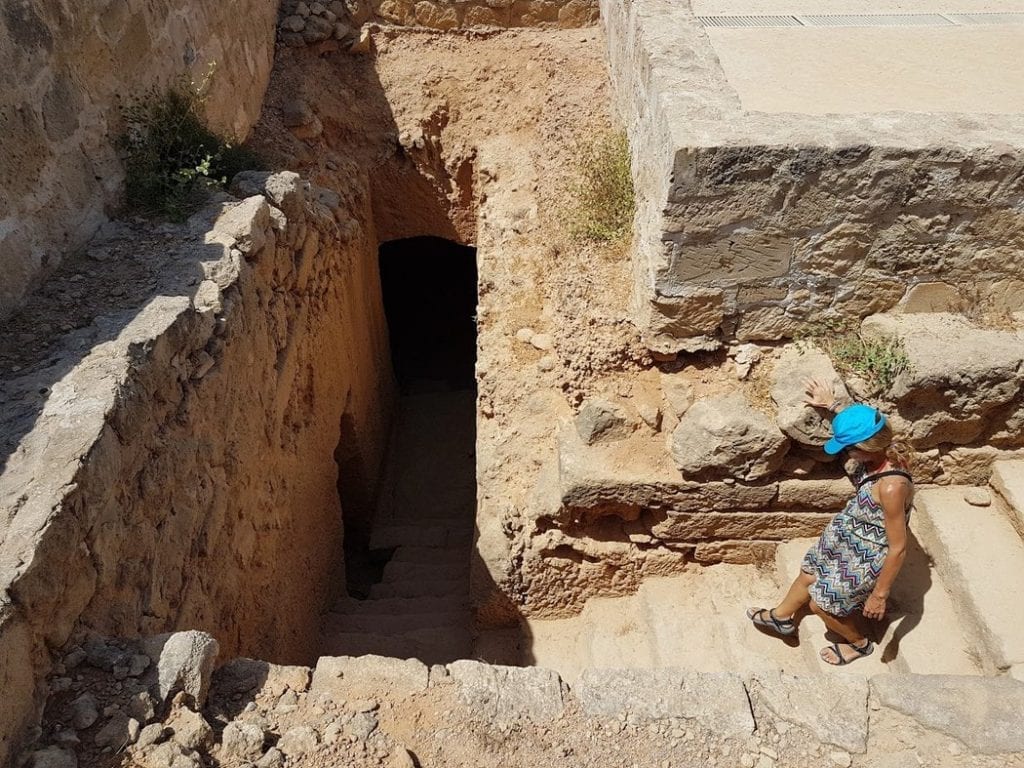 There is some debate as to if actual Kings were buried on the site. It is currently thought, that only high ranking officials were buried here.

Still, it is a testament to the power of this civilisation that bureaucrats were awarded such high honours!

If you decide to add a visit to the Tomb of the Kings on to your own list of things to do in Paphos, you should allow for at least a couple of hours on the site. It's one of the most important archaeological sites in Cyprus as well as Europe.

It gets quite warm here – Best avoid the peak heat of the day, and bring plenty of water!

Another of the top attractions in Paphos is the Kato Paphos archaeological park. This park (combined with the Tomb of the Kings) is a UNESCO World Heritage Site.

It is a significant site due to the interesting discoveries made there. The most famous of these are the mosaics. 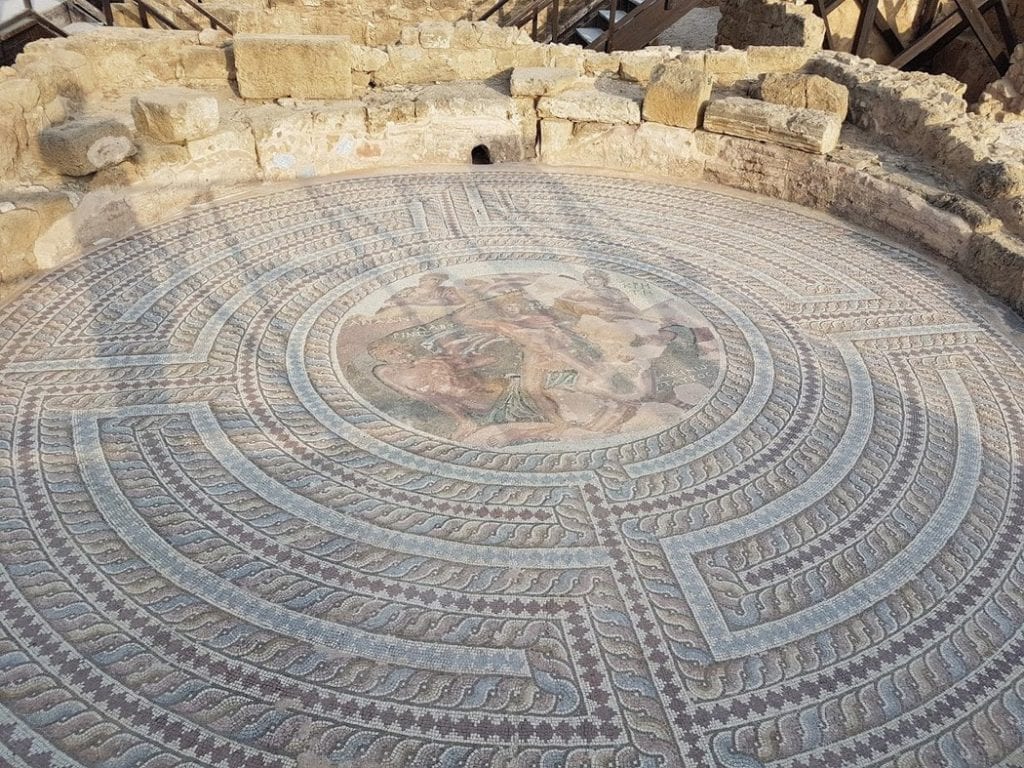 The Kato Paphos Park has many significant historic monuments that can be enjoyed. These impressive Roman architectural remains include:

One of the fun things to do in Paphos, is to take a quad bike tour. With a guide leading the way on a quad bike in front of you, you will have the chance to drive down rough dirt tracks, and explore the coastline.

With tour times ranging between 2 and 3 hours, a quad bike tour of Paphos is great fun!

There are a surprising number of bike paths in Paphos, with one leading up to the Tombs of the Kings archaeological site.

Hiring a bike in Paphosis easy, with several companies offering regular bicycles as well as e-bikes. Why not try it for a half day?

Take my advice and try to avoid cycling in Paphos in the peak heat if you can!

With around 27 stunningly beautiful beaches nearby, it’s no wonder why spending time by the sea is one of the top things to do in Paphos.

For your peace of mind, you can visit the 12 beaches in Paphos that have been awarded Blue Flag status, which certifies that they are not only clean but also safe for swimming.

In Cyprus, many of the beaches are organised, which means they are full of parasols and sunbeds for hire. This is not really my cup of tea, but you can still find stretches of beach which are free of them.

Visiting in September, we enjoyed our time on this beach, with virtually no-one else to be seen! 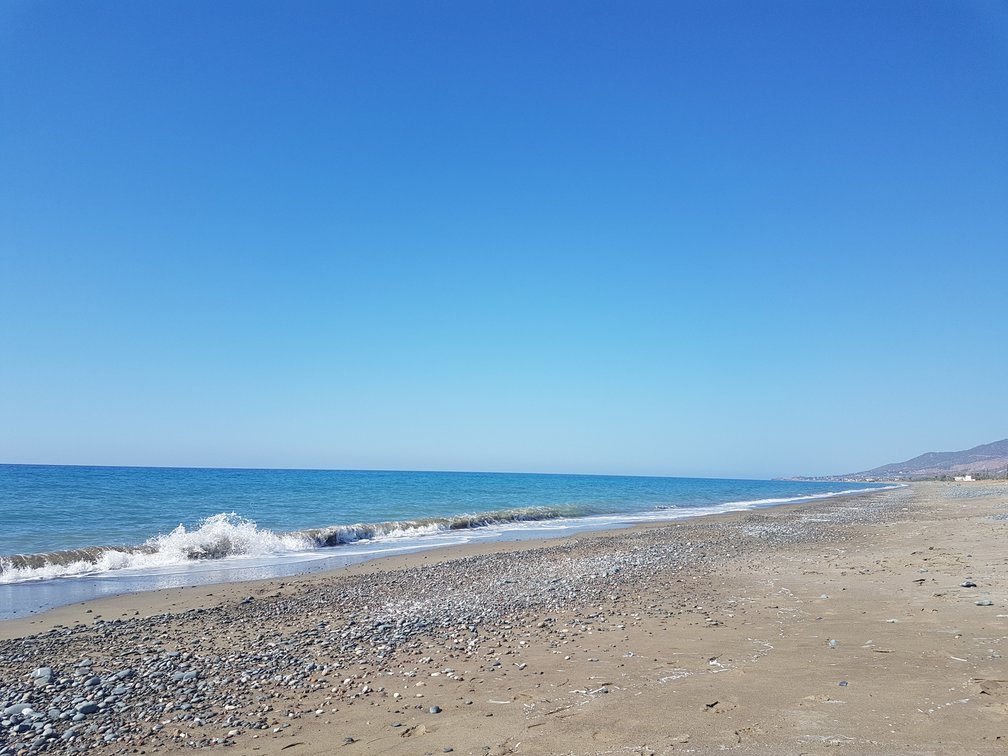 This is often described as one of the highlights of Paphos, but in all honesty it wasn't that special.

Aphrodite's Rock didn't look like anything in particular, and the beach itself was (in my opinion) below average.

Still, many people rate it as one of the things to see in Paphos, so perhaps you might want to make the trip out there anyway.


7. Check out a Shipwreck

We saw two shipwrecks along the coastline near Paphos, one of which is very near to the shoreline. The Edro III ran aground in 2011, and can be found in the sea caves area.

If you have hired a car to see the tourist attractions in Cyprus, it's definitely worth the drive! 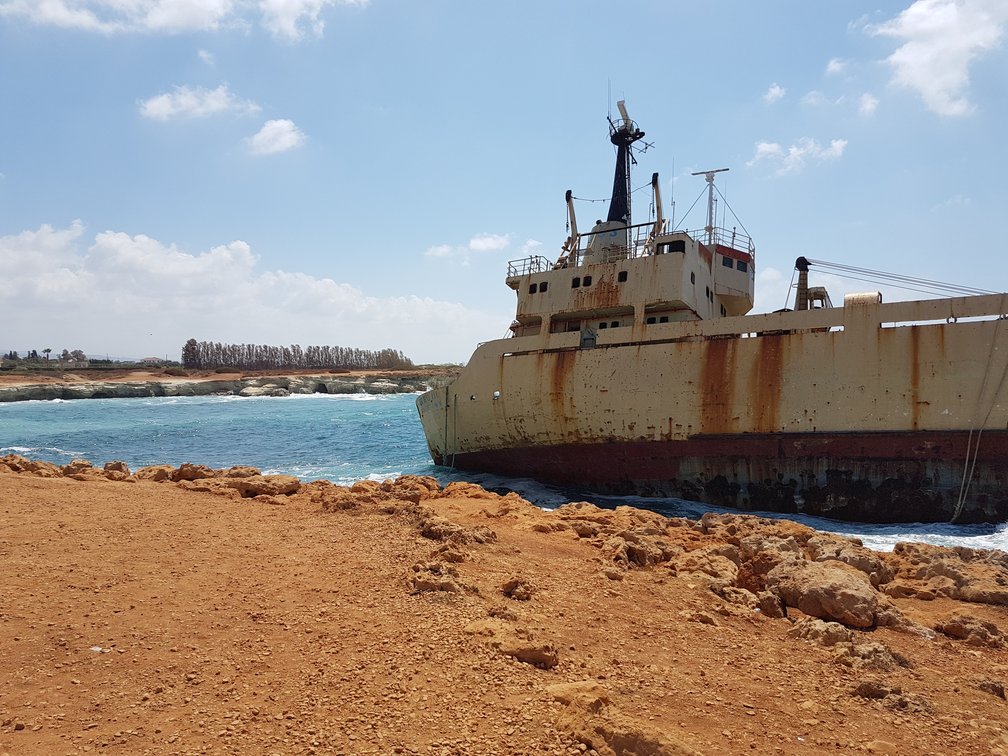 8. Get a Taste of Local Delicacies

One of the things Cyprus is known for is its delicious food.

You’ve probably heard about Halloumi, a type of cheese that is perfect for grilling or frying because of its high melting point, but there’s more to Cypriot cuisine that you should try when you visit Paphos.

Here are some of them: 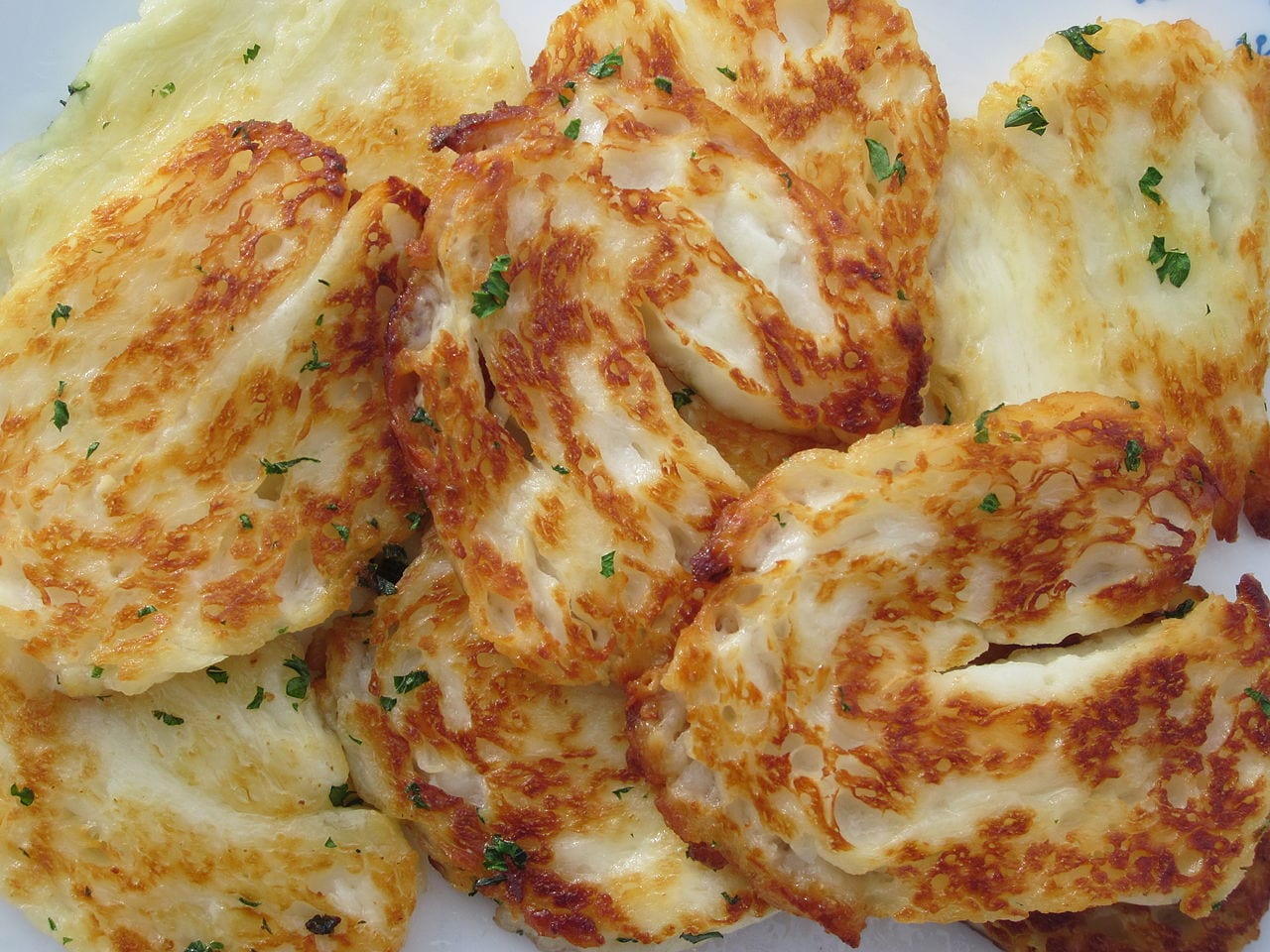 ** Check out this Paphos food tour **

Looking for some more things to do near Paphos? Here's some more ideas of day trips from Paphos you can take.

Paphos’s terrain makes it ideal for adventure-seekers whose idea of exploring a new place is biking, hiking or mountain climbing.

The nearby Akamas Peninsula, Troodos Mountains, and the Avakas Gorge are also perfect for outdoor activities, and afford some of the best views you’ll ever see in your life!

Keep in mind that Cyprus can get a touch on the warm side though, especially in August! During my trip, I was really inspired to go cycling in Cyprus, but I didn't have the time. A future trip maybe!


10. Enjoy Some Peace and Quiet in Fyti

A good way to escape the hustle and bustle of the town centre is to go on a half-day trip to Fyti, where you’ll feel as if you’ve gone back in time as you walk along the narrow streets and see the sturdy stone houses.

While there, you can visit the Folk Art Museum to learn how traditional textile was made and to buy cotton products as well as fine silk that you can take home as souvenirs. There's a short video of Fyti above. 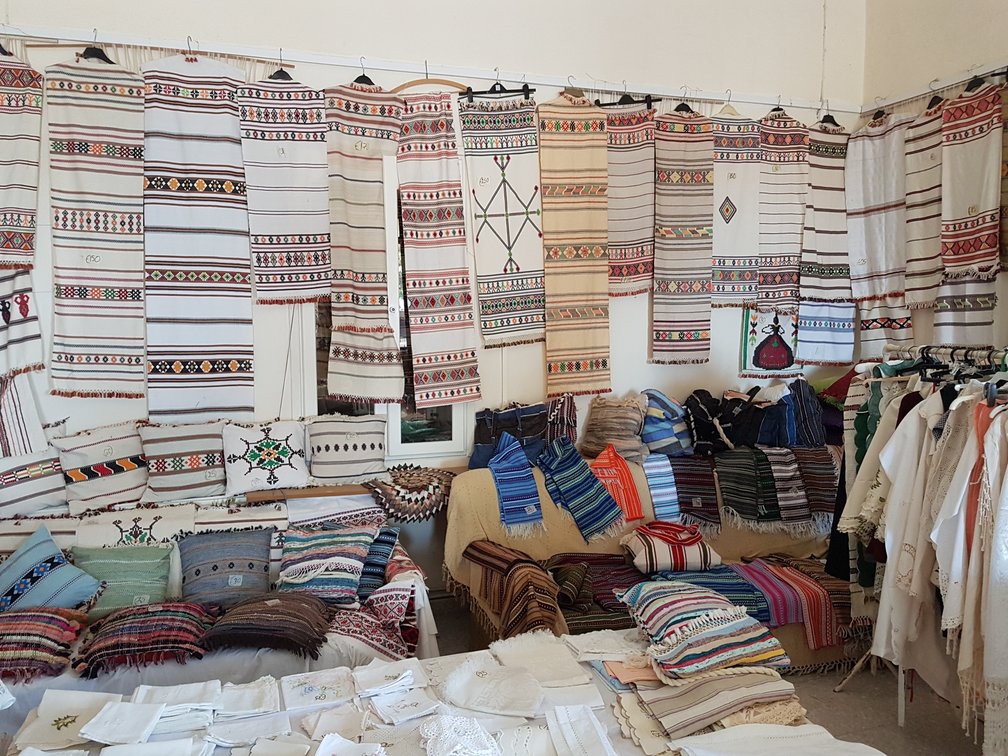 Paphos is a land for the romantics where the prehistoric and modern times meet. But whether you’re visiting the area to know more about its culture and history or just to bask in the beauty of the surroundings, you won’t run out of wonderful things to do in Paphos.


Best time to go to Paphos

The best time to visit Paphos in Cyprus is generally considered to be the months between May and November.

In my opinion though, if you can avoid August, it will do you a massive favour.

August is generally the hottest month (perhaps uncomfortably so for some), and the most expensive.

An ideal month would be September.

I would also say that Paphos is one of the best places to visit in Europe in October.


How long to spend in Paphos

Many people choose to spend their entire summer holiday in Paphos. Others decide that a long weekend in Paphos is enough before heading out to explore the rest of the island.

Whether you intend to take a road trip around Cyprus, or would like to use it as your base to take day trips from Paphos, its worth spending two or three days discovering Paphos itself.

When we visited, we stayed there a few days before carrying on a road trip around Cyprus. When my parents visit, they like to spend a couple of weeks in Paphos.

The choice, as they say, is yours!


How to get from Paphos Airport to Paphos Town

Paphos Airport is located approximately 14.5 kms away from the center of Paphos town itself.

There are two methods to get to Paphos town from the airport. These are to take a bus or taxi.

There are two bus lines that run from the airport 24/7. However, they aren't super-frequent.

Still, they are cheap at around 2 Euros for the ride, and the journey will take about 50 minutes.

Taxis are of course the most expensive option. They run by meter, and are around the 35 Euro mark for a 20 minute journey.

Taxis can be pre-booked, or taken from the queue outside Paphos airport.


Where to stay in Paphos

Paphos has a range of accommodation to suit all needs and budgets, so you'll always find somewhere to stay.

That said, if you want to visit Paphos in the peaks months such as August, booking well in advance is advisable.

August will also be the more expensive month of course.

I've found that Booking is a good site to book accommodation and hotels in Paphos.

After you've used the site a few times, you'll be given “Genius” level, which unlocks discounts and free extras.

When we stayed in Paphos, we were chose a place out near the Tomb of the Kings. We found that everywhere was pretty much walkable,

Here's a map of the best hotels in Paphos Cyprus for you to choose from.

People planning to stay in Paphos for a nice relaxing holiday often ask questions such as:

What is there to do in Paphos?

Some of the highlights of Paphos include spending time in Paphos old town, visiting important archaeological sites, taking time out on Paphos beach, and taking a day trip to the Blue Lagoon.

Is Paphos a good holiday destination?

Paphos, located on the south-west coast of Cyprus, is a fantastic holiday spot for families looking for sun and relaxation. However, there is more to Paphos than that: archaeologists, historians, and culture enthusiasts will find plenty to explore.

When is the best time to go to Paphos?

The best time to visit Cyprus is between May and June when the temperatures are warm, but much more pleasant than the more extreme heat experienced in August. People who have visited Paphos in September and October also recommend these months as good to go.

How do you get to Paphos from the airport?

There are two modes of transportation from Paphos Airport to the City Centre: taxi or bus. Hiring a Paphos airport taxi is the first and most dependable option. Paphos taxis do not on a flat rate, but rather by distance using a meter. The city centre costs around €35 and takes around 20 minutes to reach on average. 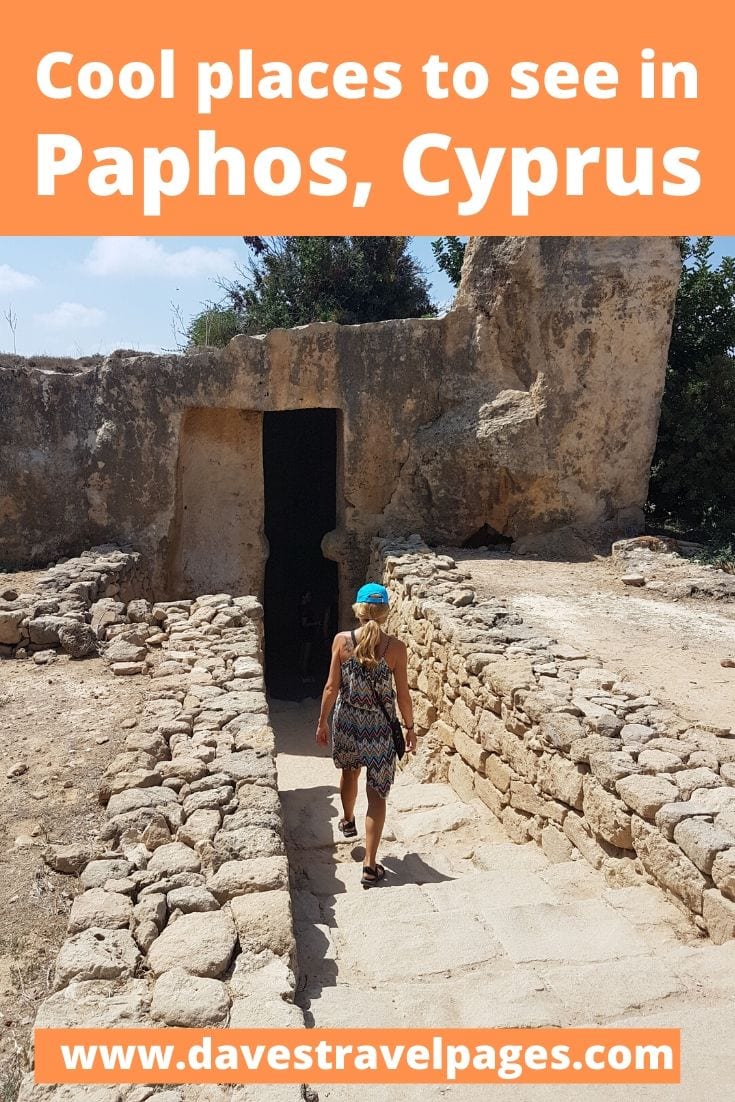