A recap of the previous night's events as part of today's bike touring blog covering my time spent cycling in Costa Rica as part of my Pan American bike tour. 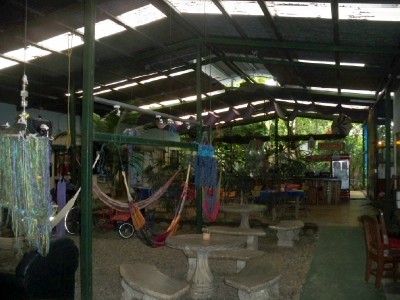 Recap of the night's events

Last night, after eating what most people seemed to consider a meal for three, a couple staying at the hostel persuaded the owner to get the guitars out and have a jam.

Normally, I stay away from things like this, as it usually involves an acoustic guitar (which I don't play particularly well), and singing (which according to most people I do even less well).

Last night, however, was slightly different. Trey, the owner of the hostel, actually had a mini-rehearsal room, with drums, mics, guitars, and more importantly for me, a bass. Sweet !

For a random selection of people in a hostel, we managed to put a few tunes together, and it was great fun as we played into the night.

On a personal note, I have missed the creative energy of playing in a band, and the night reminded me of how fun it can be. Maybe I'll join a band again when I get back to England… Who knows !

Anyhow, I left the hostel at just gone 07.30 in the morning, which is a little later than I would have liked, given that I had 120 kms to cover.

That said, the road was not too demanding, and I made my destination of Ciudad Neily in good time. I ended up staying in Hotel Elvira, but the Mistress of the Dark never did turn up !!