Leaving 70 Mile House, I cycled first to the town of Clinton, and then on to Marble Canyon in Canada. Here's the full blog from this day's leg of the Trans-America Bike Tour.

There was a frost over night, and although it had cleared by 08.00, served as a reminder that the autumn is drawing ever nearer, and that I should head south with more speed!

Breakfast in the tent again, courtesy of cold oats and honey, and after packing away, I had a quick coffee over the road at the store before heading out. The first 32 kms into the town of Clinton went rapidly, and the views were stunning.

The Museum in Clinton 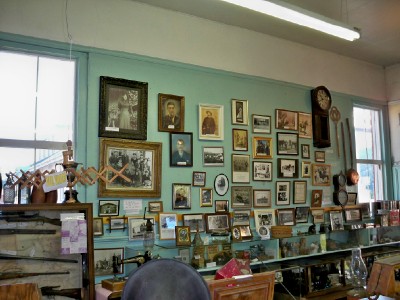 Clinton itself was a cute little village, and I had a quick potter around the museum before moving on. Upon leaving Clinton, the road led through a valley, and the wind was funnelled through it. Obviously not in my direction though.

At times like this, only songs like Slayers ‘Bloodline' can get me through, so it was on with the MP3 player, and head down. Eventually I turned off Highway 97 and onto Highway 99.

This is described as a scenic route, and also the sea to sky highway, so I was all prepped up for hills, and was not to be disappointed. The scenery was outstanding!

For some time now, I've been passing little farms, where the dogs will bark and occasionally give chase after sensing me.

Today was slightly unusual though, in that a farm I passed had a man hobbling out towards the road from his shed without a top on, waving his right arm around his head erratically and making peculiar noises.

I'm not sure if he had tourrettes or not, but I found it highly amusing, particularly because the guys dog just sat there staring at its owner with a kind of bemused expression on its face.

– Dave Briggs
Dave wrote this travel guide about cycling through Canada when cycle touring from Alaska to Argentina.