After a night wild camping in a field in Mexico, I cycled on to Punta Perula. Here's my bike touring travel blog from the day's cycle ride.

Leaving my wild camp in Mexico

I awoke nice and early, which was just as well, as I had to sort out a flat tyre (thorn from the field). With that taken care of, it was onto the road, and after only five or six kilometres, I reached a Pemex station. (Pemex is the nationalised Mexican Petrol station chain).

A quick wash and a drink was in order before carrying on! Along the way, a supported group of cyclists passed me, who were cycling from Puerta Vallarta and heading south. It made a pleasant change to have a decent conversation in English for a change.

I reached my goal of Punta Perula before lunch, and found an RV park which had good facilities – Shower, kitchen and WiFi. For anyone heading in a similar direction, El Palmar gets my vote!

Punta Perula is another one of those towns where it would be so easy to take time off.. Miles of beach, small undeveloped town, and peace and quiet.

It was another unbelievably humid day, and I was waiting for it to break into a storm that never happened. The weather stands a chance to be like this for the next few months… probably best not to think about it. 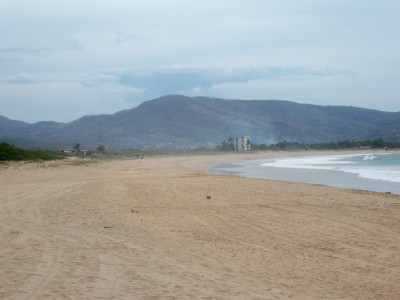