Last Updated On November 27, 2022 by Dave Briggs Leave a Comment

Leaving Haines Junction, I embarked on a BIG day's cycle ride. There seemed to be no time for photos either, as I cycled a big distance to Whitehorse in Canada. 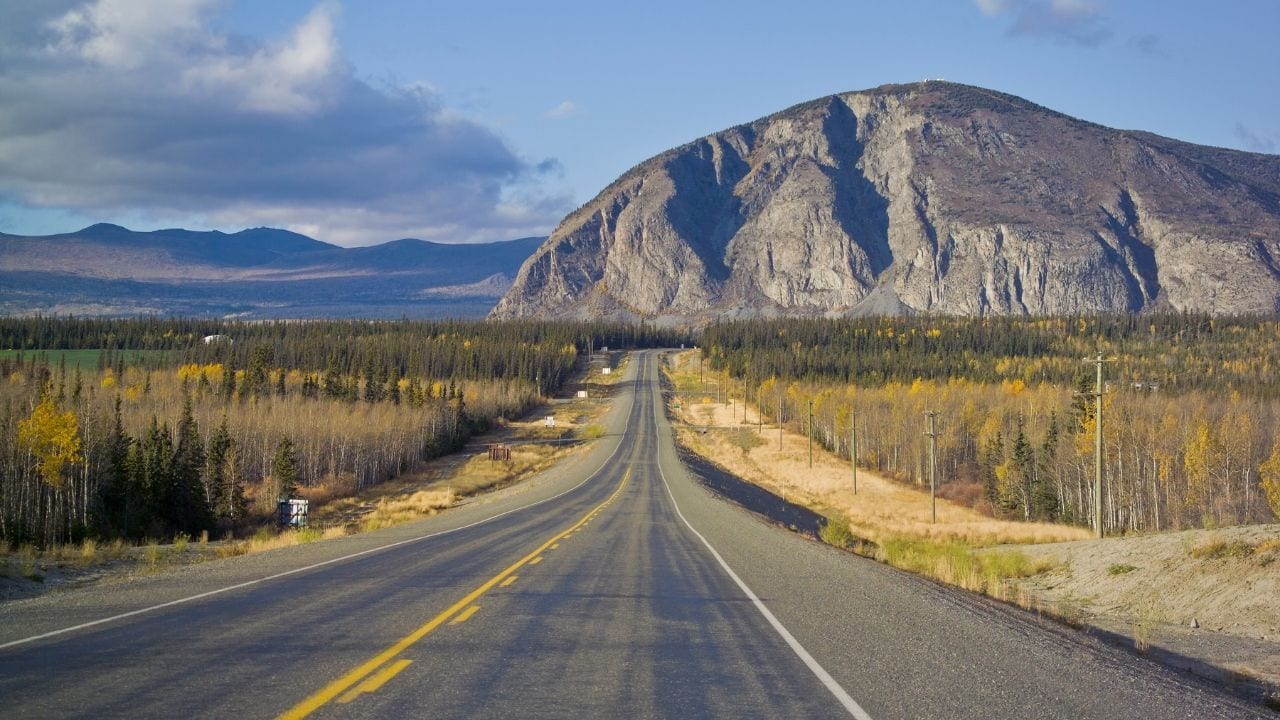 Cycling out of Haines Junction in the Yukon

Today, I had a big day's bike ride in mind. I intended to cycle from Haines Junction to Whitehorse, a distance of 156 km or 97 miles. Better stick up on food first!

Ultra budget has gone out of the window, because now I am on ultra eating…. and boy does it feel good! I stocked up at Madleys General Store at Haines Junction before I left, where they had bananas… yes, bananas!!

As well as supplies for a couple of days, I bought breakfast which consisted of two smokies in a bun – think huge sausages wrapped in a cheesy bread type thing.. Those, with a litre of milk filled me up nicely, so it seems that a 1300 calories breakfast is required from now on!!

Feeling full, and with the knowledge that I had a pleasant day of eating ahead of me, off I went. At about 17 kms out, I met David who was just starting from where he had camped out for the night.

He soon zoomed off into the distance (a combination of things such as he has a lighter bike, skinnier tyres, bigger wheels, 17 kms less, oh, and also I have an extra 16 years on him playing a factor.)

The days cycling was really enjoyable again. Yes, again… amazing stuff!! I like this cycling in Canada! A slight tailwind always helps, and I was powering along and constantly refuelling.

After about 100 kms, I saw David again who was having lunch by the side of the road. We set off together this time with the goal of Whitehorse in mind, and I don't think he cycled much slower than he normally would have done… well, not initially anyhow.

We reached the city limits of Whitehorse, but as any cyclist will tell you, the smaller the population, the further out they put the city limits, so we were still some distance from the centre.

Eventually, after 9 and a bit hours in the saddle, and a magnificent 170 kms + in the bag, we made it to Robert Service Campground, where I was outraged to pay 18 dollars a night for camping. Maybe ultra budget needs to come back after all!!

Navigate to other blog updates from this tour below:

– Dave Briggs
Dave wrote this travel guide about cycling from Haines Junction to Whitehorse in Canada when bike touring from Alaska to Argentina.