If you are considering travelling around the world, this article comparing overland travel by bicycle and 4WD may be of interest. Obviously, bicycle touring is always my preferred choice, but I can see many advantages to travelling with a 4WD. 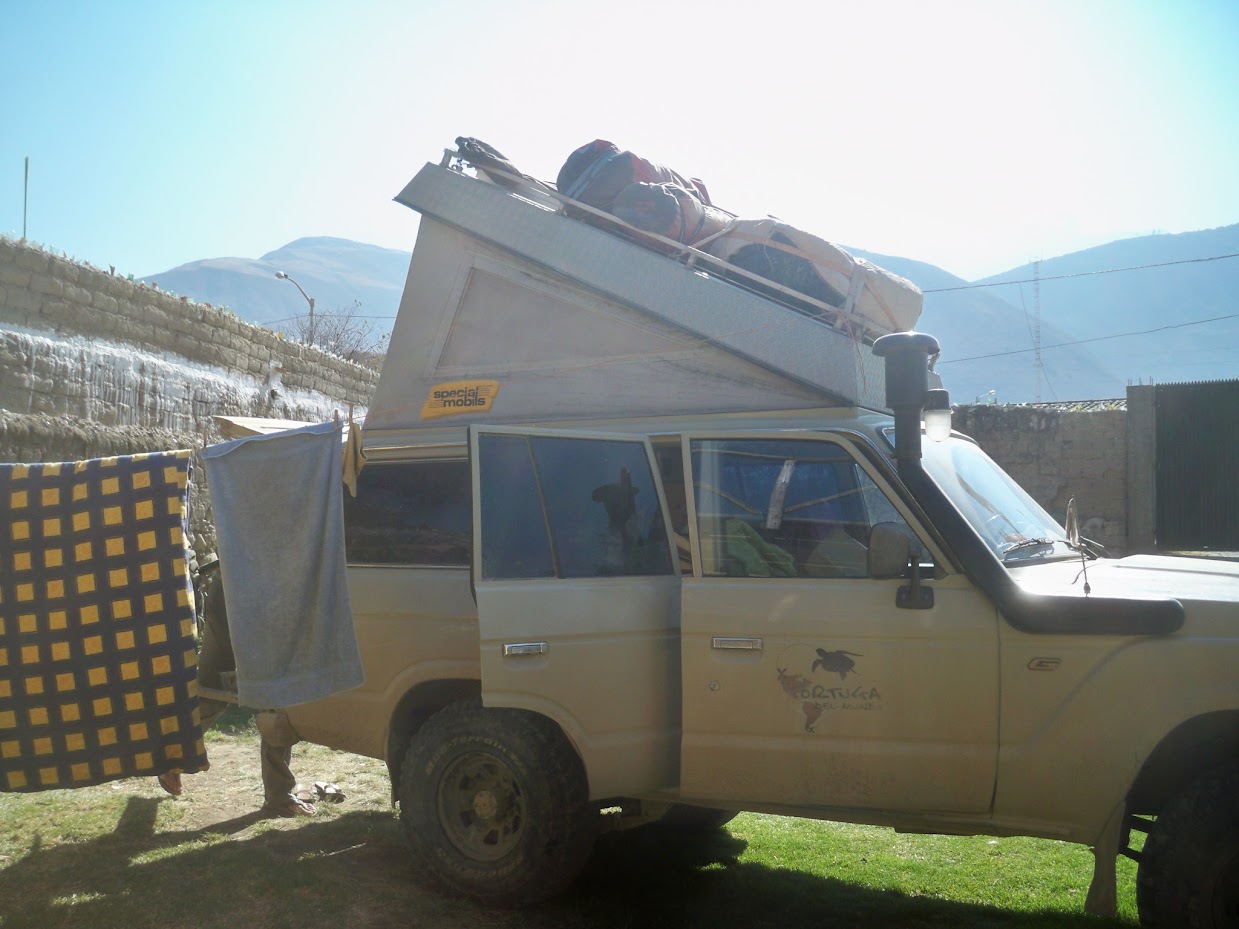 Whilst cycling in Peru, I got talking to a couple who were travelling through South America by 4WD. It got me thinking – Which method is more convenient, more economical, more challenging? Read on to find out more..

I arrived at the following conclusions after talking to Ralph and Corrina, owners of the vehicle pictured above. I have broken down the different aspects of overland travel into a few brief categories.

Flexibility – In terms of flexibility whilst actually moving, then overland travel with the 4WD probably wins out. They were able to go to more remote areas of countries than myself on the bicycle, and detours to places which would for me be down a ´one way dead end road´ were easy for them.

In short, because they could more easily cover longer distances in a day, they were more flexible. On a bicycle, I average 80kms a day cycling, whereas in a 4WD this can be expanded into hundreds of kilometres.

Accommodation – For wild camping, a vehicle and bicycle are probably on the same level. Whilst its easier for me on the bicycle to find somewhere unobtrusive and hide away from view of the road, the 4WD is a mobile home, and wherever they park, is where they can sleep. 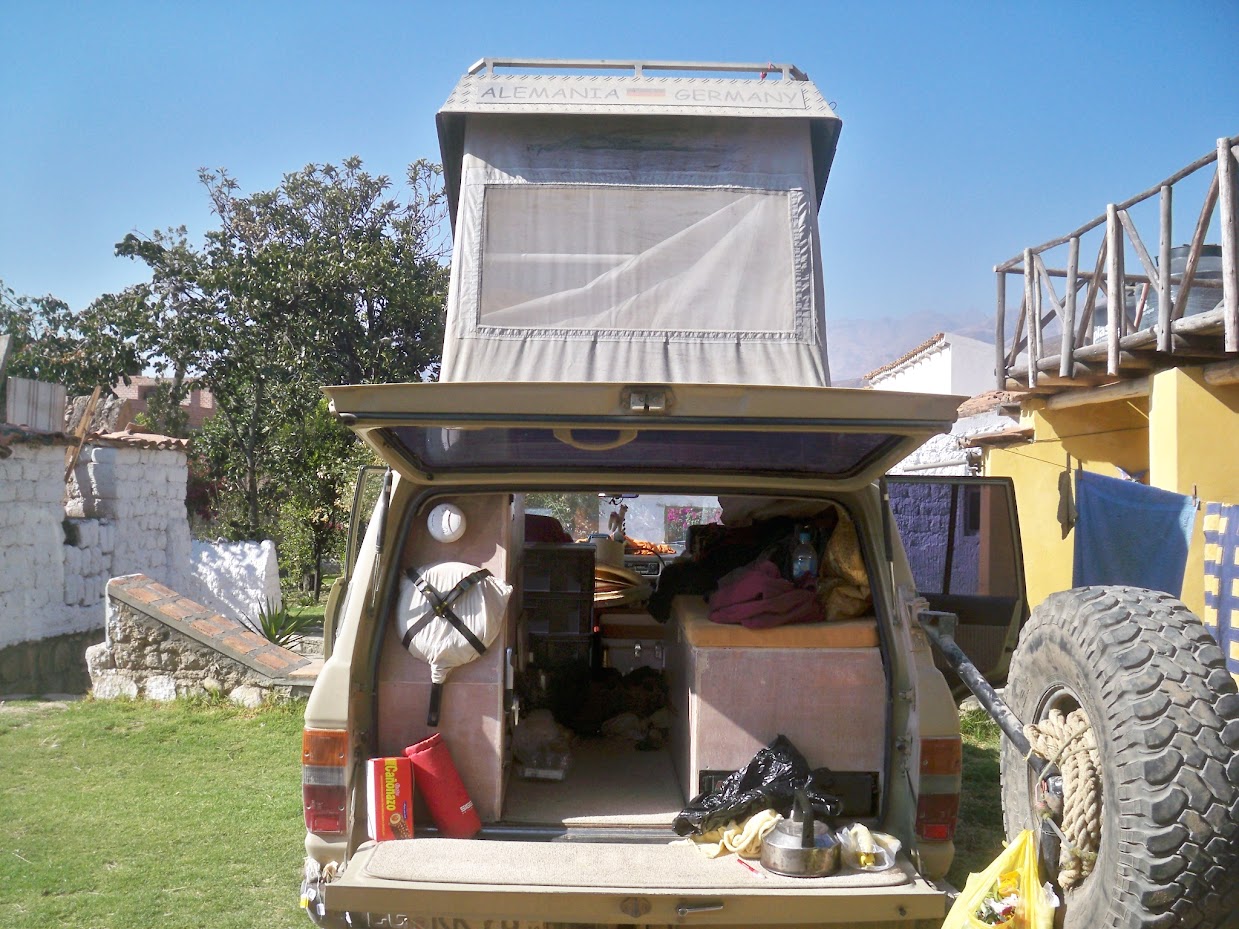 For traditional accommodation, the bicycle probably just about comes out on top. I can wheel my bicycle into any hotel room, where as with a vehicle, they would need to find somewhere secure to park it.

This probably restricts them to either staying in larger, more expensive hotels with parking. Otherwise, they would need to leave the vehicle out on the street. Who knows if it would still be there in the morning? 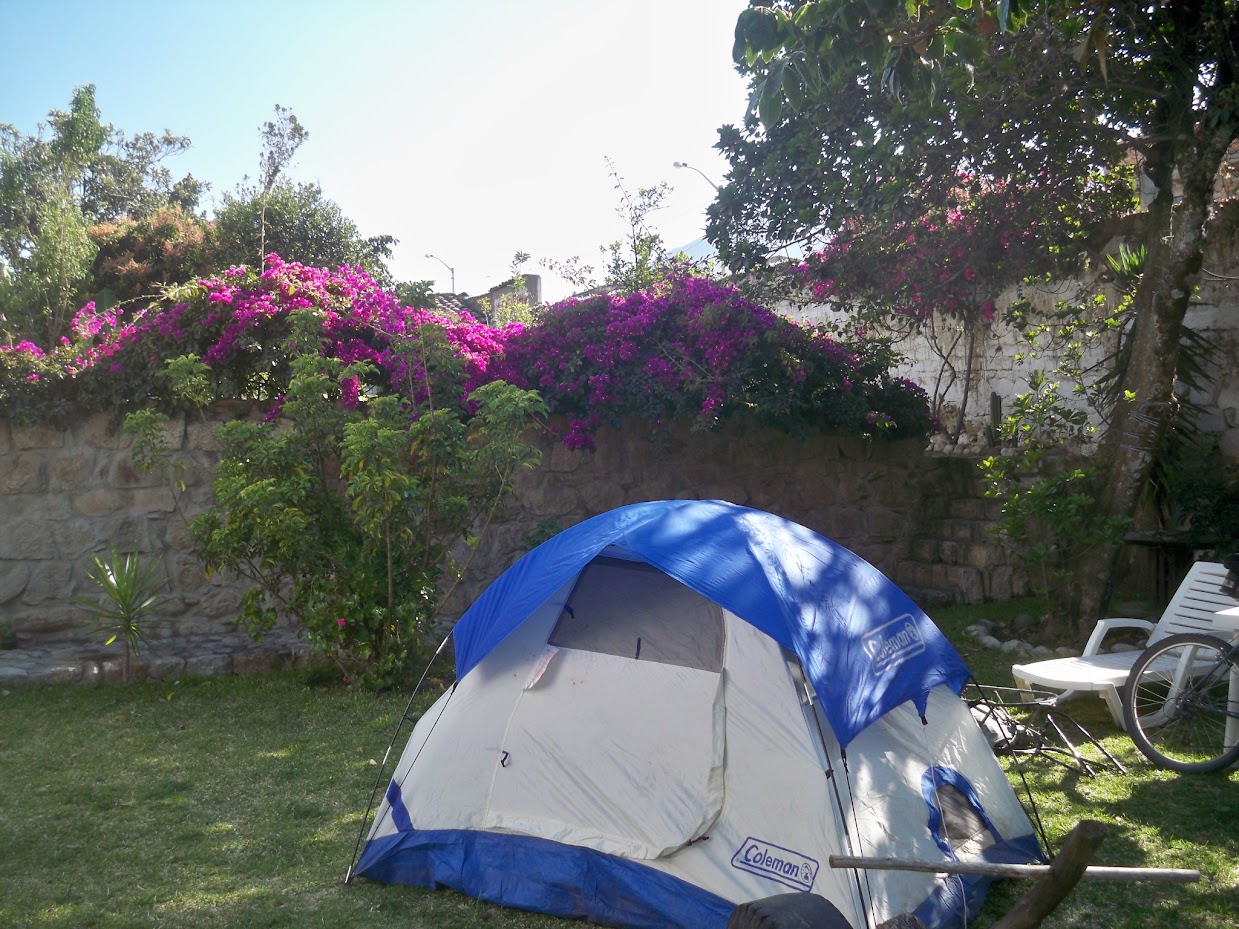 Daily Running costs – The bicycle is cheaper to run, all I need is food! (as much as you can please!)

Repair costs – Now this is an interesting one. A lot depends on what goes wrong with either the bicycle or 4WD, and whether it can be fixed by the rider-driver.

For example, a new dérailleur system, chain, and cables that I had to buy in Colombia, set me back as much as a new fuel pump did for the 4WD. Our tyres were also the same price, although I only needed two! Overall, I think the repair costs by comparing travel by bicycle and 4WD for our two trips were probably even.

Initial costs – Well, the bike I had at the time was cheaper! (That said, my current expedition bicycle is not far off the initial price they paid for their 4WD)

Getting the bicycle or vehicle overseas – For my bicycle as additional luggage, getting it to the Americas cost me a total of 100 pounds. To get their 4WD from Germany to South America in a shared container cost somewhere in the region of 700 pounds. A clear win for the bicycle here.

Crossing borders – Riding a bicycle, I seem to fall into the gaps when crossing a border Neither a foot passenger or car owner, I am waved through border crossings most times very easily after having my passport stamped. With a vehicle, although there is now no longer a carnet to pay at each border, there is more paperwork, and much longer is spent there. 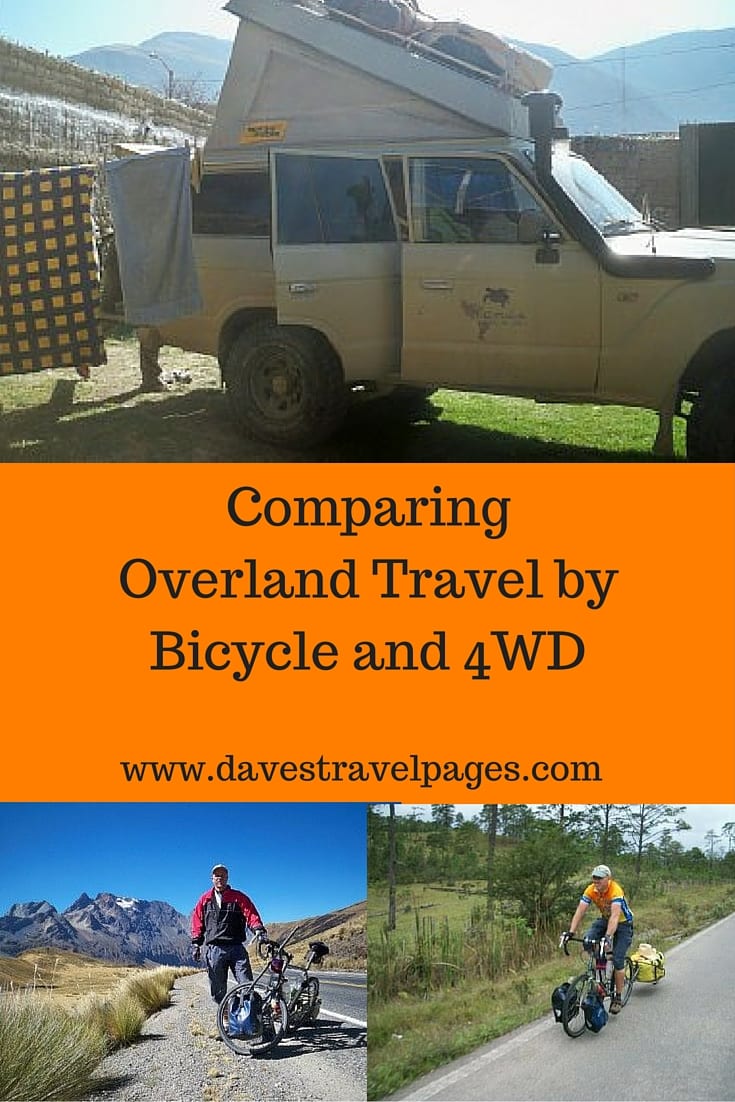 Additional insurances – I generally don't travel with bicycle insurance. Most of this comes down to cost, although for any future trip, I would have to re-evaluate the insurance situation. For a $WD, in every country, insurance (3rd party) needs to be arranged for a vehicle. Not costly, I might add, but another thing to think about.

Day to Day costs – The 4WD wins out here. By being able to buy food or drinks in bulk and keeping it in the 4WD, they avoid paying slightly higher prices in the out of the way places. In a 4WD, they can carry several weeks food and water if needed. On a bicycle, i can really only carry 4 days food. This means that on occasion I buy food at less than favourable prices, simply because there is no other choice.  It was difficult to work out how much extra I paid for food when comparing our two trips by 4WD and bicycle, but I believe I would have paid several hundred dollars more. It all adds up!

Ralph and Corrinas website is at http://www.tortugadelmundo.blogspot.com . It is in German, but if English speakers would like further information about travel by 4WD or their trip, I am sure they would be able to answer any emails in English as well! 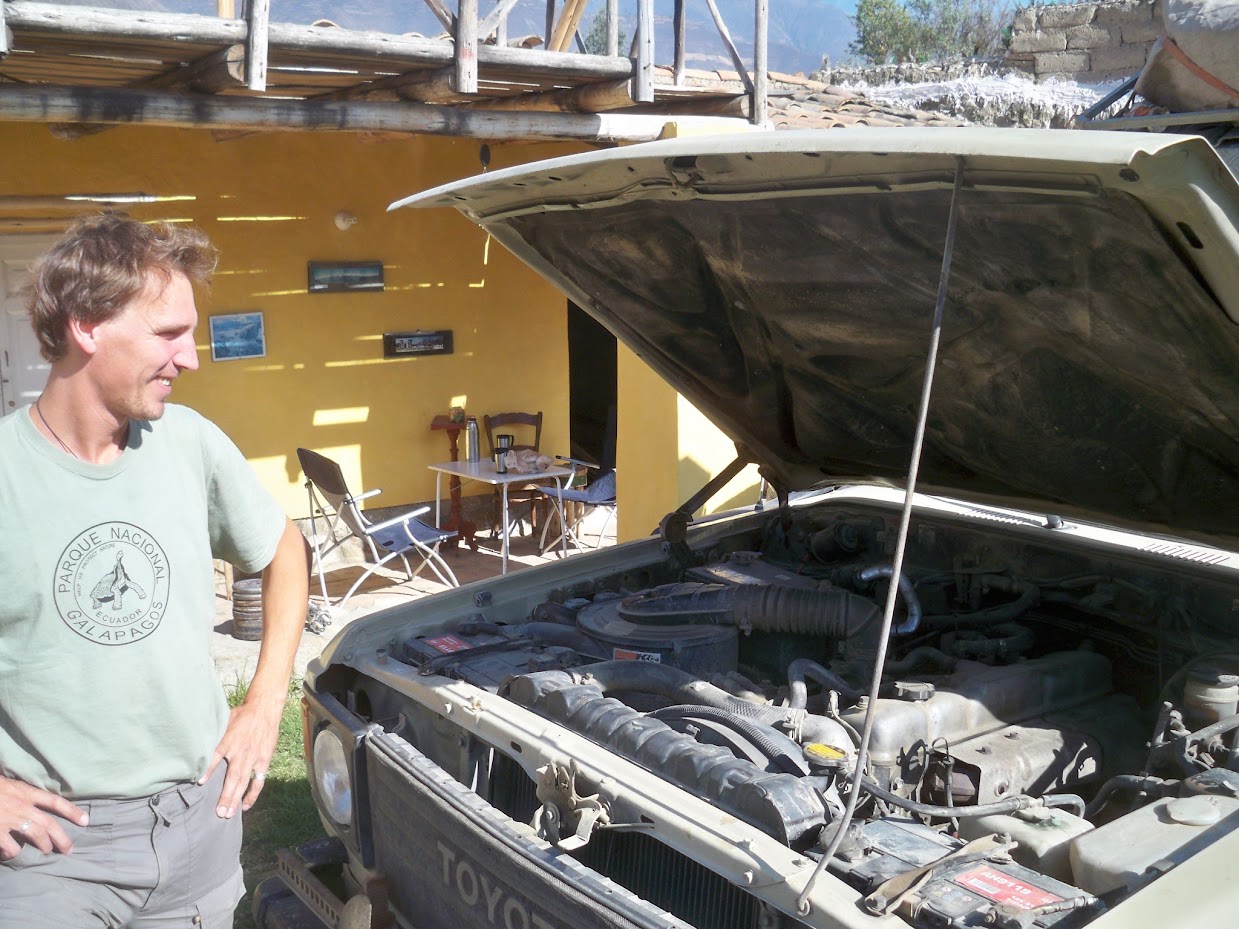 I found it interesting comparing travelling by bicycle and 4WD. Of course, I have travelled around Australia by car for 10 months, and so know what it is like to travel using my own vehicle, but I was still surprised as to how relatively cheap it is to travel by 4WD.

Once the initial vehicle costs, and import have been discounted, then really, its probably only an extra 20 pounds a week for fuel that is the overall difference. Its something to think about for the future. I still plan to make my next trip a cycling one, but the one after that… who knows!

Have you travelled overland by bicycle or 4WD? Which method would you prefer to use and why? I would love to read anything you have to say, so please leave a comment!