I'm planning a cycling trip around Iceland as my bike touring adventure for 2023. This page has all the details. 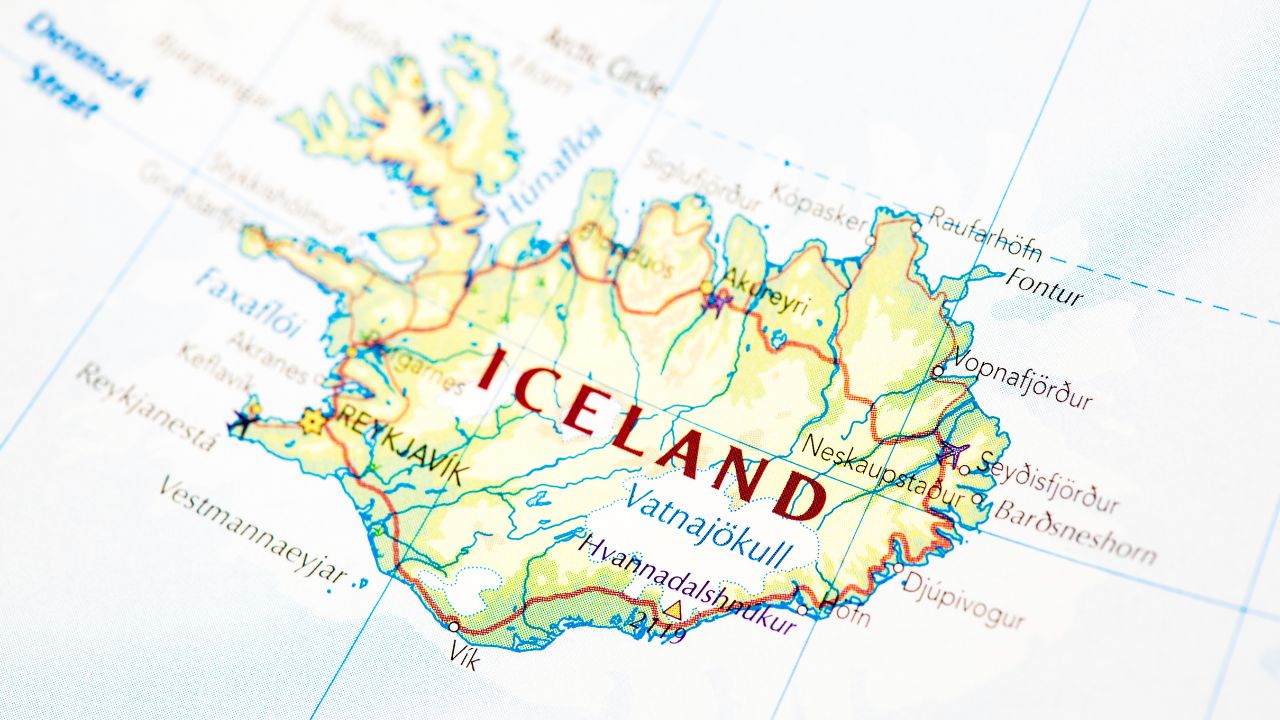 Iceland has been on my ‘I need to go there and cycle around it list' for a long time now!

I first toyed with the idea of riding around Iceland in 2016, but eventually cycled from Greece to England instead. After that, it seemed that each year that went by, the Iceland cycle trip was the one put on the back burner due to different circumstances.

Until now! In 2023, I'm finally setting off on my Iceland cycling adventure.

I've got around 6 weeks to ride around Iceland from mid-July until August. The flights are booked, and as I write this in the middle of January, I'm already counting down the days!

This page is mostly focused on what I needed to do to plan the cycle tour around Iceland. So, if you're thinking of creating your own Icelandic cycle adventure, this should help get you started.

If you're looking for more specific guides, you can find those here:

Getting To Iceland With A Bicycle

The first hurdle to overcome when planning an Iceland cycle tour, is getting there with the bike!

Taking a ferry to Iceland is actually an option I considered for a while, as I thought it would be a unique experience.

There's one that leaves from Denmark, and takes a couple of days to make the trip to Iceland. In the end though, it didn't make logistical sense, so I started looking for flights.

I've been living in Athens, Greece for a few years now, and didn't really expect to find a direct flight. As luck would have it though, Play Airlines introduced a direct flight for 2023, so I booked it!

Total cost for a flight from Athens to Iceland and return, with the various baggage options I needed for the bicycle came to 658 Euros. Ouch!

If you're planning a trip from the UK, northern Europe, or the US, you can also find direct flights in. Let's hope yours will be cheaper than mine!

As I am flying with the bike, I'll need to pack it down into either a box or a bike bag. Either way, I'll need to store this when I first arrive in Iceland. (The reason is, that bicycle shops might not have too many empty bike boxes to give away or sell).

There's a couple of options near the airport, and I'm thinking to leave my bike bag/box with Geysir car rental. There's a not insignificant storage fee involved with this – I'll update how much I paid and how it all worked out after I complete the cycle tour!

Choosing A Cycle Route Around Iceland

I've got more or less 6 weeks to play with, and figure I'll do something around my normal bike touring average of 80 kms a day.

Allowing for a few days off here and there, some bad days because of wind and rain etc, and an Iceland cycling route with a distance of just over 2500 kms sounds reasonably realistic.

In terms of direction, I'll be starting at the airport and circling around Iceland in a clockwise direction.

I'll go first of all north up to the Westfjords, then work my way east to the north-east of Iceland. Afterwards, I'll will be heading south down the east coast and looping back around to Reykjavik on the south-west coast.

Right now, I'm just beginning to research what route is best and what towns/villages I need to go to en-route. I'll update this page as I go, so keep an eye out for more Iceland cycle tour updates soon!

In a separate post, I'll include a spreadsheet with a planned route, and after the tour, update it with the route I actually ended up taking.

Should I Use A Traditional Bicycle Touring Setup Or Bikepacking Setup In Iceland?

If I was cycling in Iceland for a week, I might consider a bikepacking style setup. For 6 weeks though, I'll want to take more things to make life more comfortable (warm and dry!), camping gear and the like. 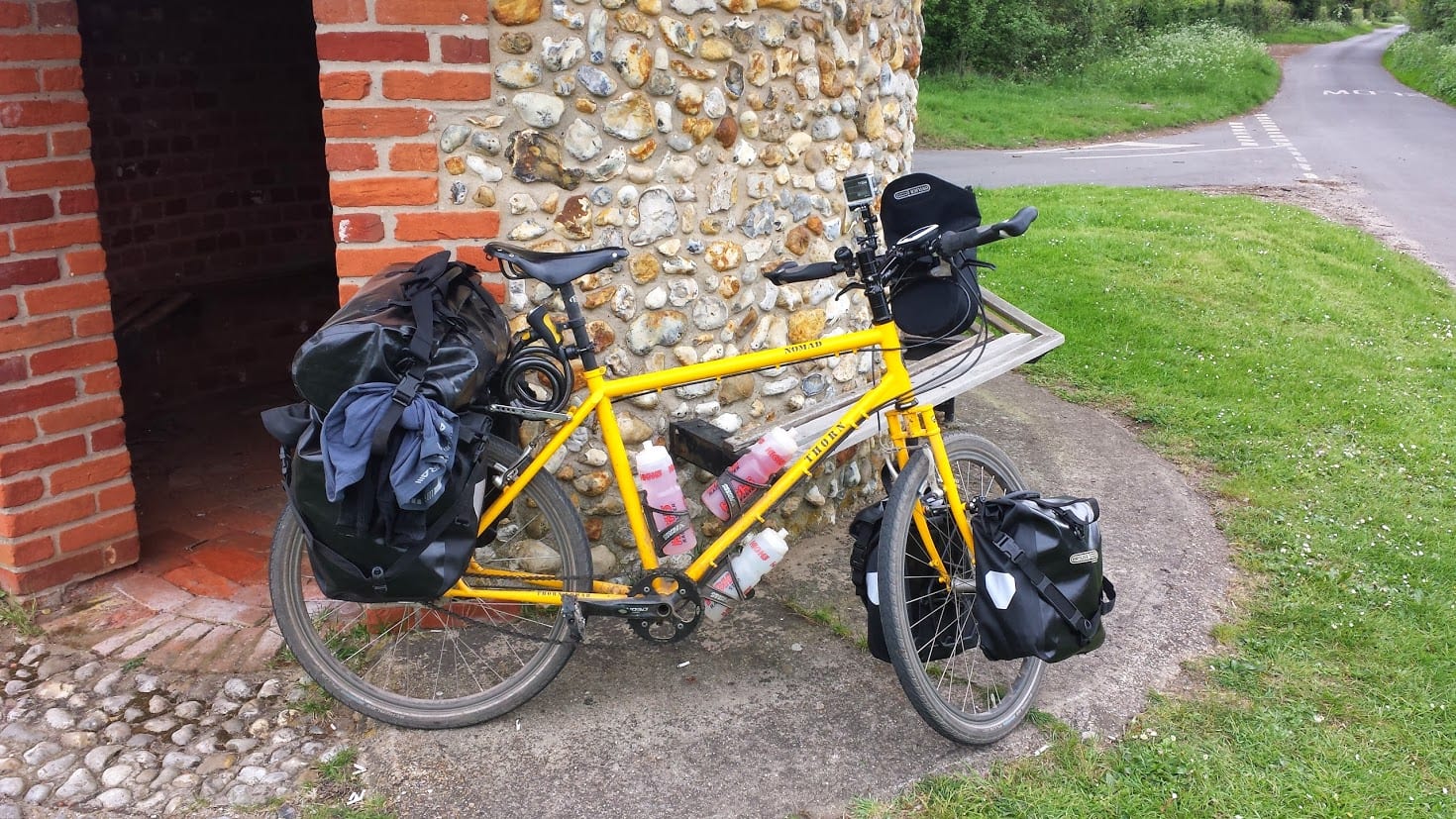 As such, I'll be riding my Thorn Nomad (pictured above from a bike tour in the Fens region).

I've chosen a classic bicycle touring style with front and rear panniers, a handlebar bag, and a rackpack if needed. I'm pretty comfortable touring with this classic cycle touring setup, as I'm not out to win any races!

This racks and panniers arrangement also makes it easier to carry several days food at a time, which is essential in some areas which have fewer provision options.

What weather should I expect cycling Iceland?

The answer is probably all of it!

Although I plan to cycle Iceland in the summer time, I still need to prepare for strong winds, plenty of rain, and maybe the occasional touch of snow at higher altitudes in central locations.

I've seen a lot of videos of people cycling through Iceland who seem to be pretty wet and miserable at least some of the time! I remember back to cycling in Canada when I hit a horrible stretch of bad weather, and I seemed cold and wet for days on end!

As such, I'm going as prepared as I can with a range of wet weather gear such as Sealskinz socks, waterproofs, and for the colder temperatures merino tops, cycling trousers and shorts.

Will it be enough? You'll have to check out the videos and future blog posts to see! There'll also be a separate gear list post.

I'm going to try 2 or 3 short bike tours here in Greece before I go to Iceland, so I can test gear out, and be a little more prepared. I'm also going to up my training so I can be at a pretty good level of fitness before I go.

In January so far (end of week two as I write this), I have managed to cycle just twice a week for a total of 60kms a week. I've also been to the gym 3 times a week where I do 20 minutes on the stationary bike before hitting different body parts (chest one day, arms one day, legs one day for example).

I've got a little trip to Chania in Crete planned starting on the 16th of January through to the 19th, so will miss a few days. On the flip side, I expect to do a lot of walking when sightseeing in Chania, so I'll be getting an extra workout that way.

All in all, I'm excited for the cycle trip around Iceland and motivated to get ready for it. I'll keep updating this page as I go, so keep an eye out for any further updates!