Last Updated On May 4, 2020 by Dave Briggs Leave a Comment

After nearly 18 months of cycling from Alaska, I finally reached Argentina. This blog post is from the first day's ride from La Quiaca to a wild camping spot near a mountain.

Blog post written December 15th 2010 as part of my bike tour from Alaska to Argentina.

A breakfast of a couple of sweet things and a cup of coffee, and I was off. The countryside consisted of sun bleached grass and no trees. Here, llamas were the main herd animal, although there were also some sheep. 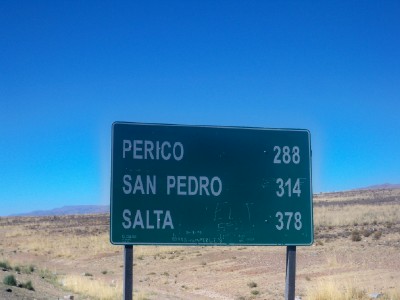 It wasn't as far as I thought to reach Salta, my next major stopping point. It would still be a few day's cycling though. 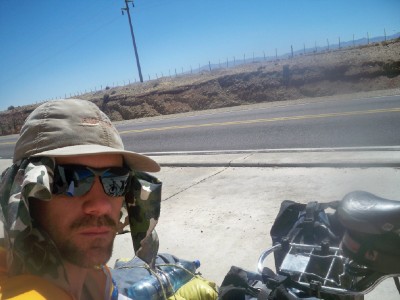 Although my inability to smile seems to make it 10000 km!!

The road was in good condition, and some benevolent force, as though making up for the nonsense at the border the day before, gifted me with a tailwind. Lunch of noodles, and a coffee by the roadside.

After lunch, things changed a little, and an uphill section began. Reaching Abra Pampa which itself was at 3400 metres, I had another 300 metres to climb to reach my peak of the day at over 3700 metres.

Along the way, I met Eric who had hired a bike from a nearby city to cycle 5 days to the border. I was quite jealous of his one small day pack strapped onto his rear bicycle rack! When I get around to cycling through Asia, that’s the way to go I think!

Anyhow, just past the peak, I called it a day, and set up my wild camp just off from the road on the right hand side. I got a small fire going so that I could cook up my pasta, and spent the remainder of the sunlight reading. 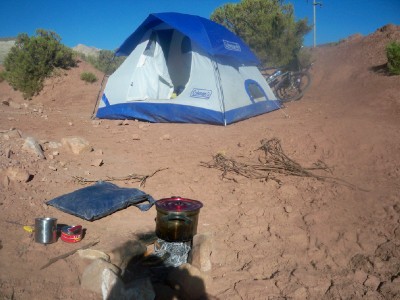