I had been cycling from Alaska since 2009, and in December 2010 I finally crossed the border from Bolivia into Argentina. Here's my blog post from the day.

Cycling from Bolivia to Argentina

Not the greatest night's sleep, as I couldn’t really get comfortable during the night. Well, it was either that, or the fact that I had gotten used to wine at night before sleeping!

Breakfast was porridge and a cup of coffee, and again, I had forgotten the way that sometimes the mornings meals can taste a little bit of the meal from the night before. Tuna coffee… yum!

Hitting the road, it seemed that I had reached a plateau, although it gently rolled. For the most part, it was paved today, which suited me just fine!

Villazon, which is the Bolivian border town with Argentina soon came up, and as it was quite early, I decided to stop off for some snacks and get a bottle of water.

The snacks were easy to find, water was something a little bit more problematic. It seemed every shop sold clothes or some other non essential item, and water was in short supply.

I never did find where they sold big bottles of water, so bought a 2 litre soft drink and filled up my water bottles at a public bano. 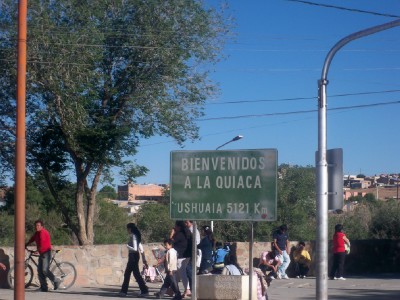 So, as it was 11.00, I changed my money into Argentinean pesos, and made my way to the border crossing. This should be easy, I thought to myself, and I looked forwards to going past La Quiaca by maybe 40kms.

This was not to be though as a five hour wait to get into Argentina then followed. Five hours!!! WTF !! No one could really work out why.

The queue didn’t seem to get any longer, but it didn’t get any shorter either, and we literally inched our way forwards every 15 minutes.

Then, suddenly, after two hours in the queue, they announced that everyone needed a photocopy of their documents. Scenes of chaos as one hundred people sprinted into town in search of a photocopy shop.

Now, anyone that has spent any time in Central or South America, will tell you that there seems to be more photocopy shops than any other form of shop. Try finding one open when you actually need it though!

The nearest available one was a mile away (I kid you not). Should have taken the bike really!

Anyhow, with photocopies done, I returned to the queue once more. And started to wait again! Some people that I had spoke to had been there since 07.00 in the morning.

I had expected some issues at this border crossing, but they were mainly due to being searched. As it was, no search happened when I eventually did get through. Oh, and did they ask for a photocopy? Of course not!

A sign for Ushuaia, my original planned destination for this trip (now subject to change!!). Crazy to think that I am “almost there” with 5000 km left to cycle!

Having waited so long in the queue, I was in no mood to cycle on past La Quiaca, and so decided to spend the night there. A room cost me 55 pesos, which is about 9 quid. I haven’t paid that much for a room in a long time, and will definitely be camping all the way to Salta!

Many people mention the difference between the Bolivian side and the Argentinean side, but I didn’t think it was that noticeable. The streets were still a bit dusty, except that this side, everything is more expensive for the same thing.

Dinner of pizza (which was awesome). I am not altogether sure how far it is to Salta from here, but will try to get there in 5 days of cycling.