Last Updated On February 9, 2023 by Dave Briggs Leave a Comment

Cycling the road from Mollepata to Pallasca was one of the most challenging days of cycling in Peru. Here's my bike touring blog from the day. 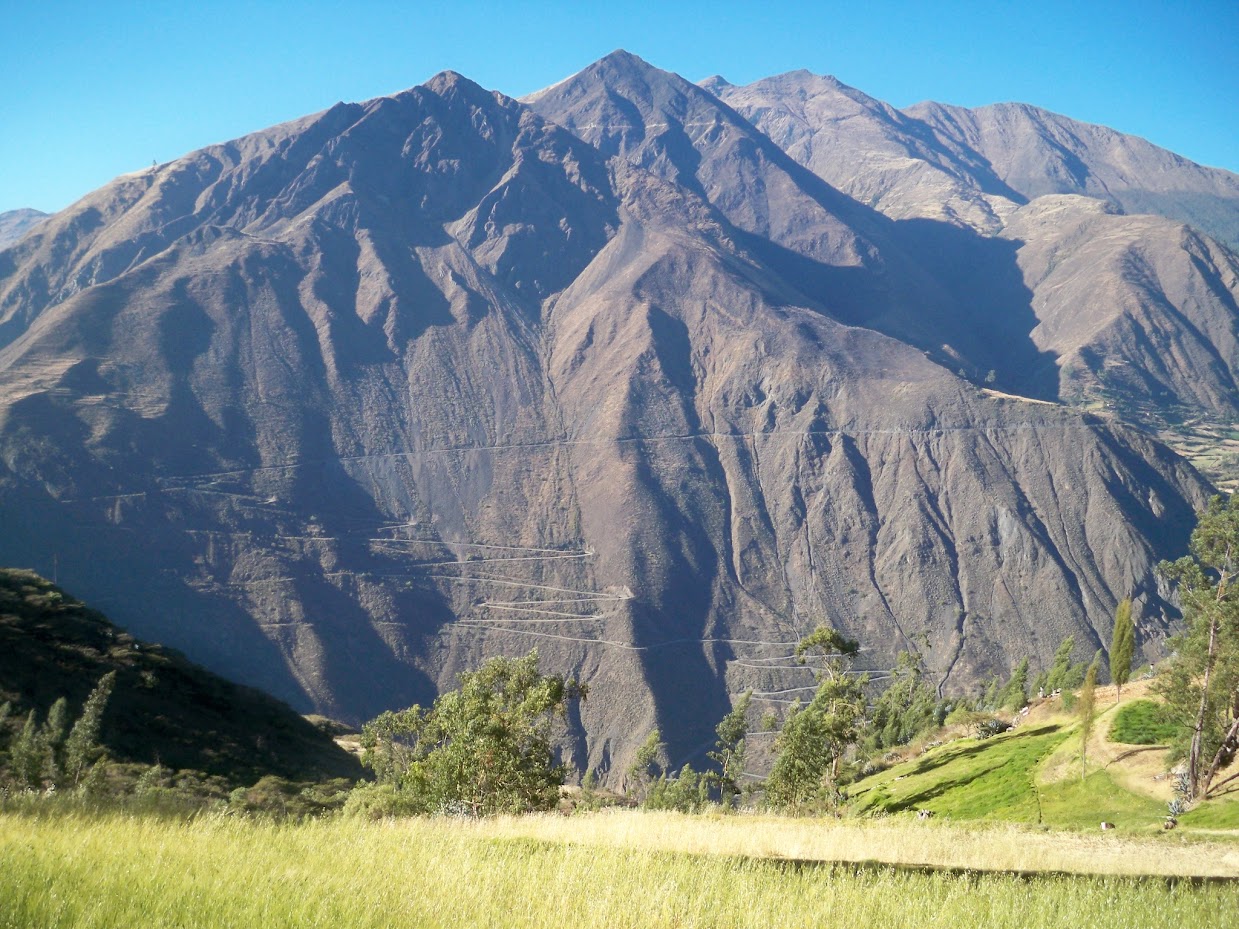 After a decent nights sleep in Mollepata, I was ready to go at 07.30, but the sweet little old lady who ran the Hospedaje insisted on cooking me breakfast first. I am rarely one to say no to food !

Then I was on my way.

An hour of downhill began, and all the time, I could see opposite the mountain I would have to cycle back up, and the numerous switchbacks. 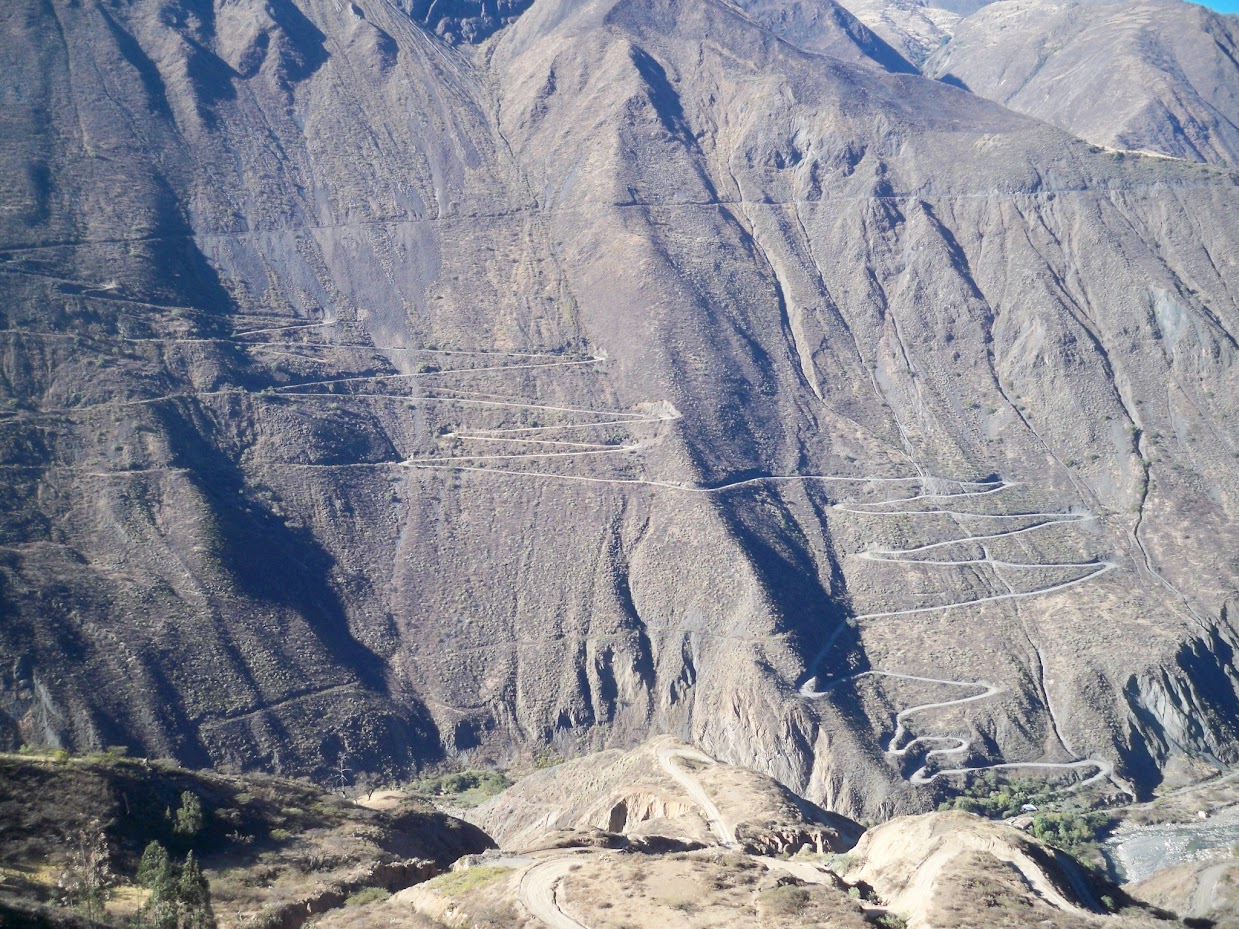 I’m not sure if you can make it out or not, but the white lines etched into the mountain is the switchback road. It was quite a daunting prospect.

Please let there be another road…

After reaching the river, I checked for one last time at the couple of houses there if there was a road following the river to Chuqicara, but unfortunately no such luck. 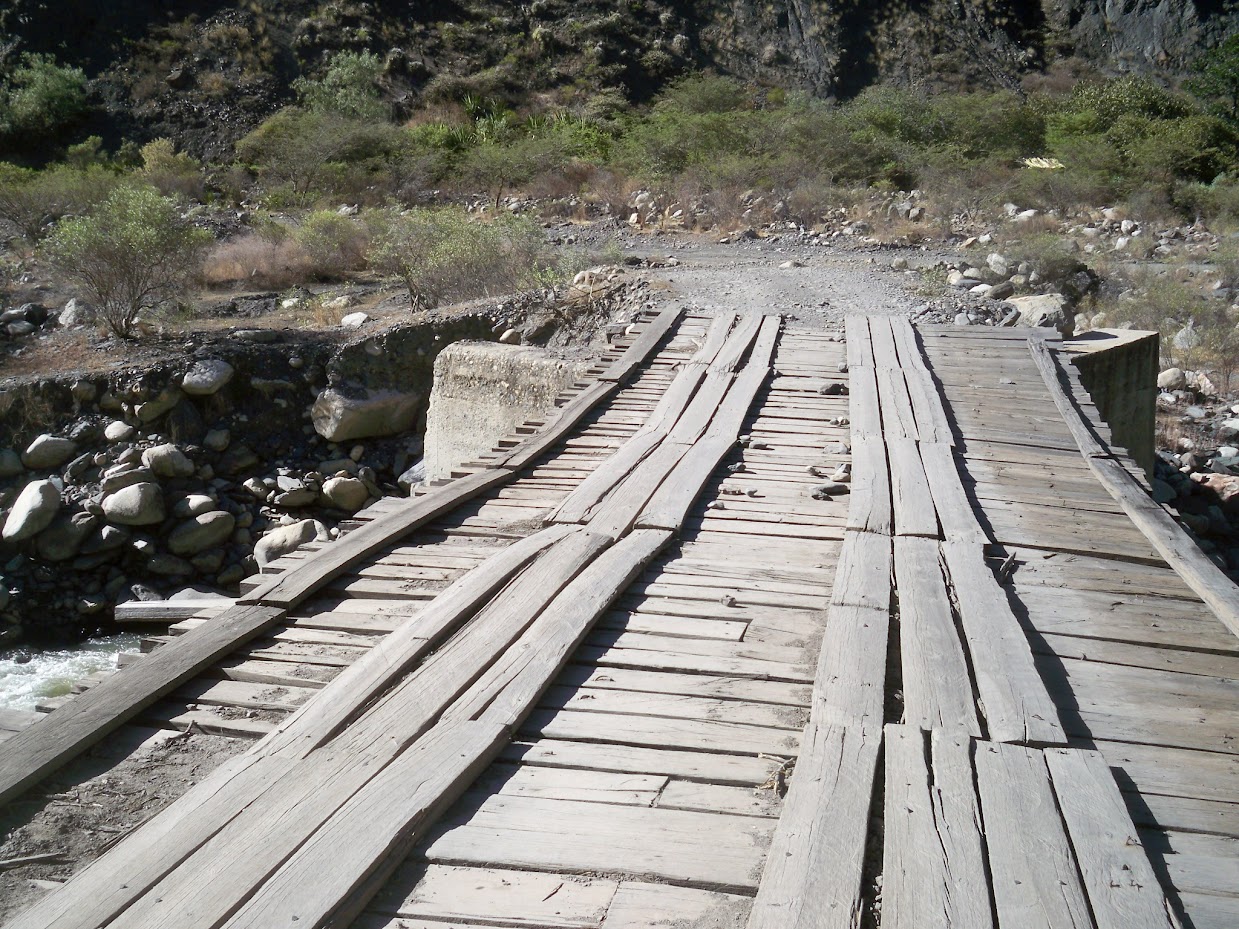 There was no choice but to take the switchback road to Pallasca. Oh dear.

I hadn’t really been looking forwards to this, as in the only other blog I could find of someone cycling this route, the guy had written that it had taken him the best part of a full day.

The road, as expected, was not in optimal condition, but I made steady progress as I laboriously cycled up and around the switchback road with its tight, dusty corners.

About half way up, I pulled over when I heard a car approaching – the first one I had seen in two hours. 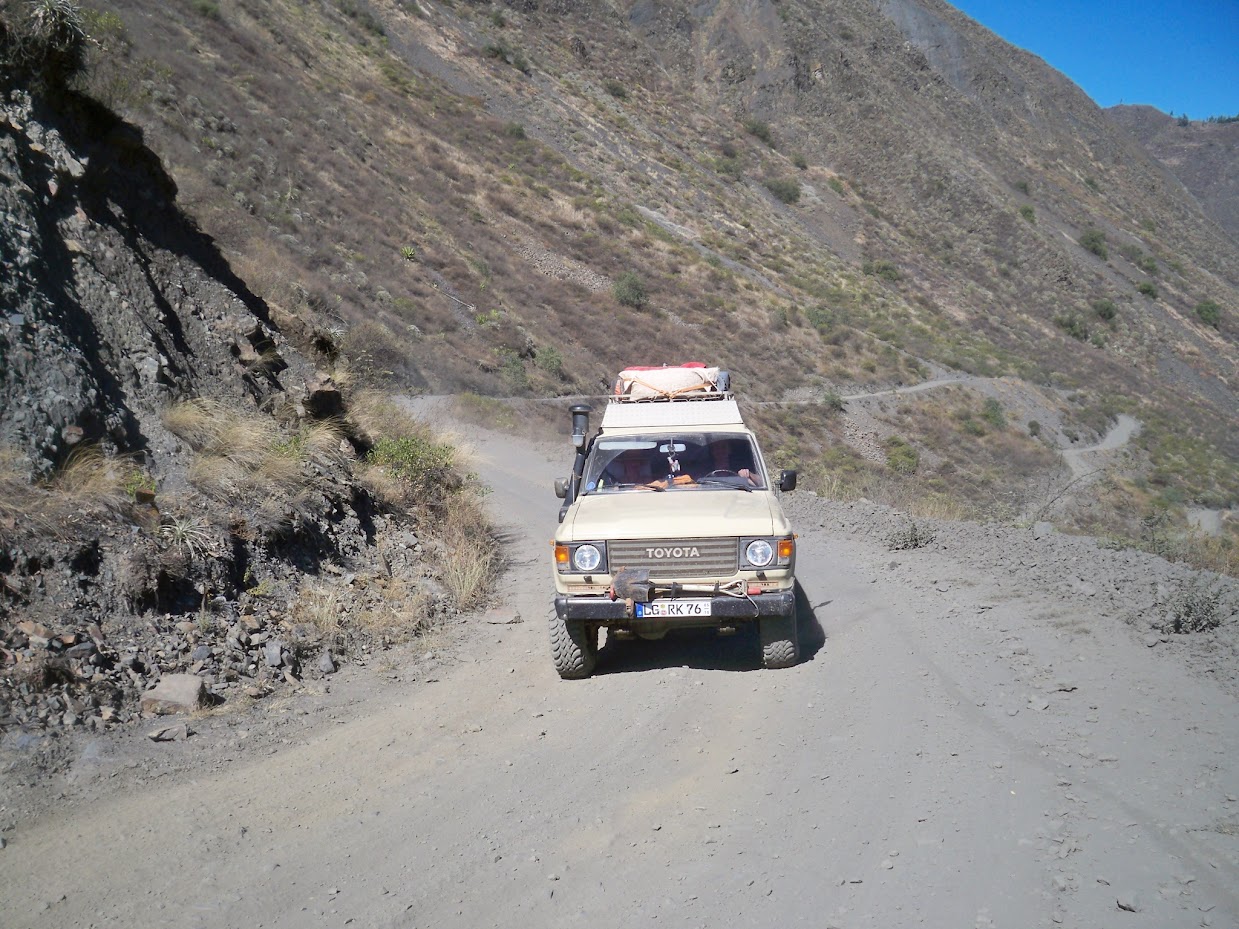 It turned out to be a German couple who are travelling around South America in a 4WD they brought over from Germany.

Nice to see other independent travellers out on the road! I later met up with them again, and wrote a post comparing travel by bicycle with 4WD. 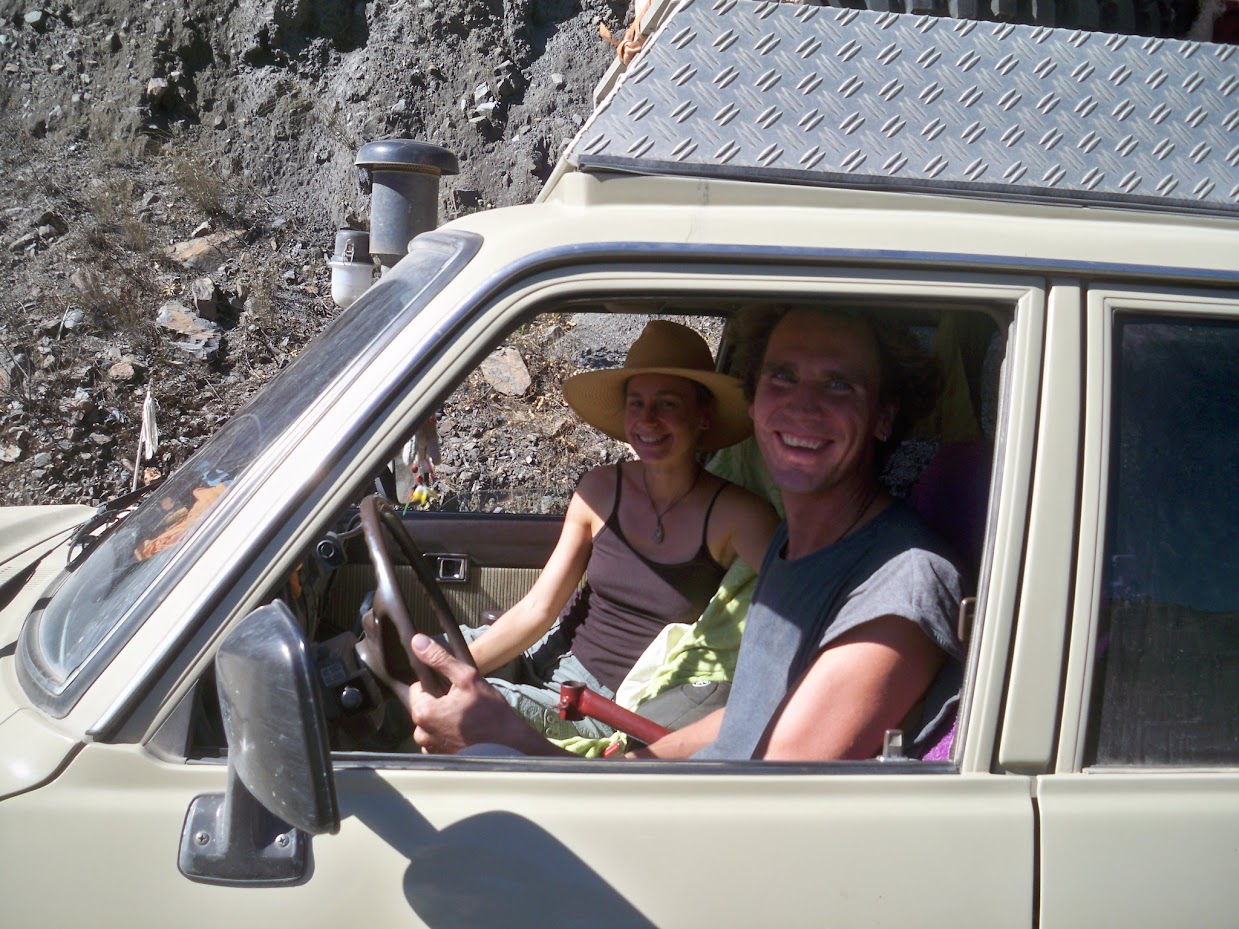 A half hours chat with Corrina and Ralph, and then they drove off leaving me to carry on uphill.

There were a couple of particularly brutal sections where I had no choice but to get off and push the bike, as I couldn’t get the thing moving again once stopped. 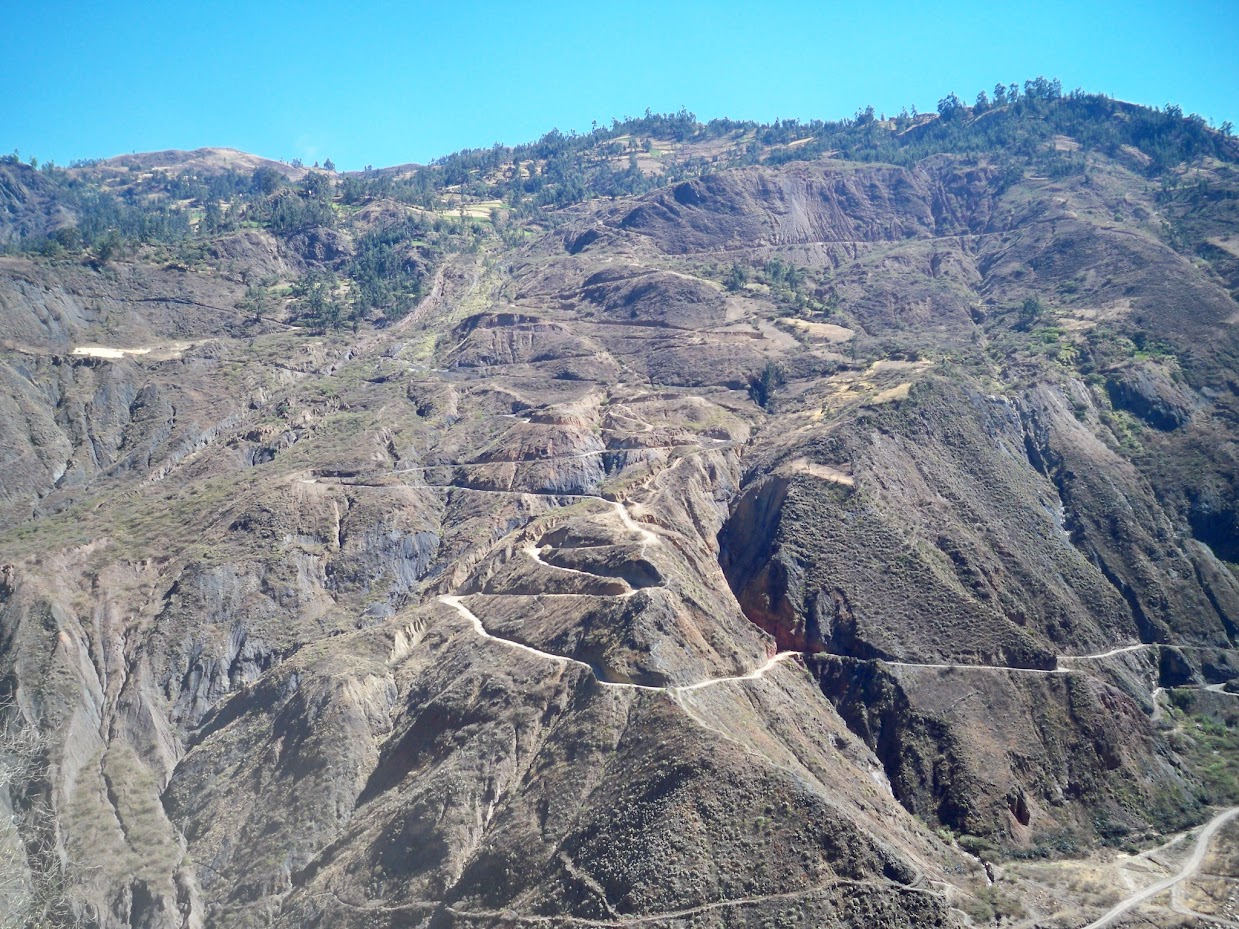 Eventually, I finished the switchback section of road at the small settlement of Conchucos, where a small bodega was a most welcome sight. 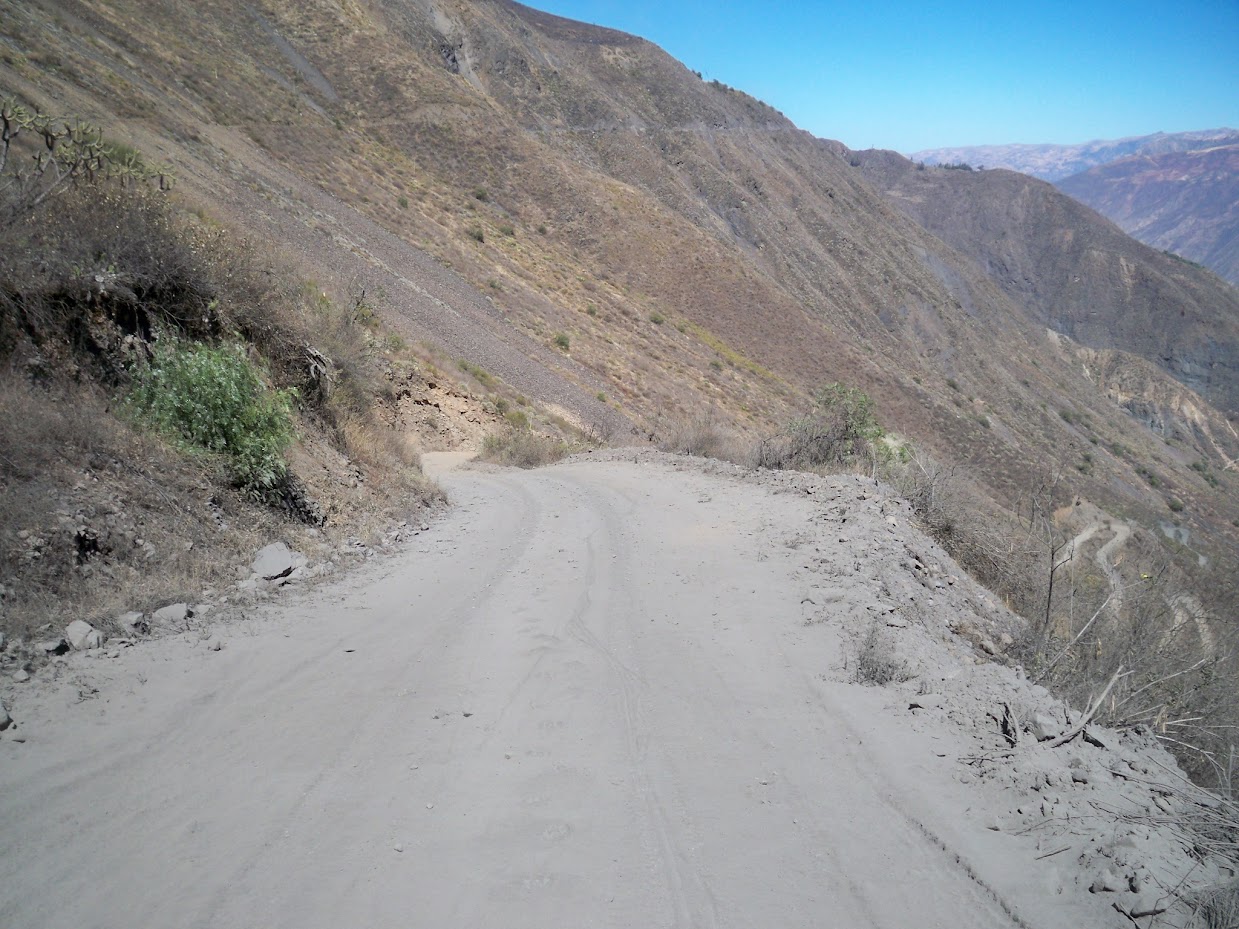 On entering, Lopez, the owner, said that the German couple had bought me a coke. Danke !! 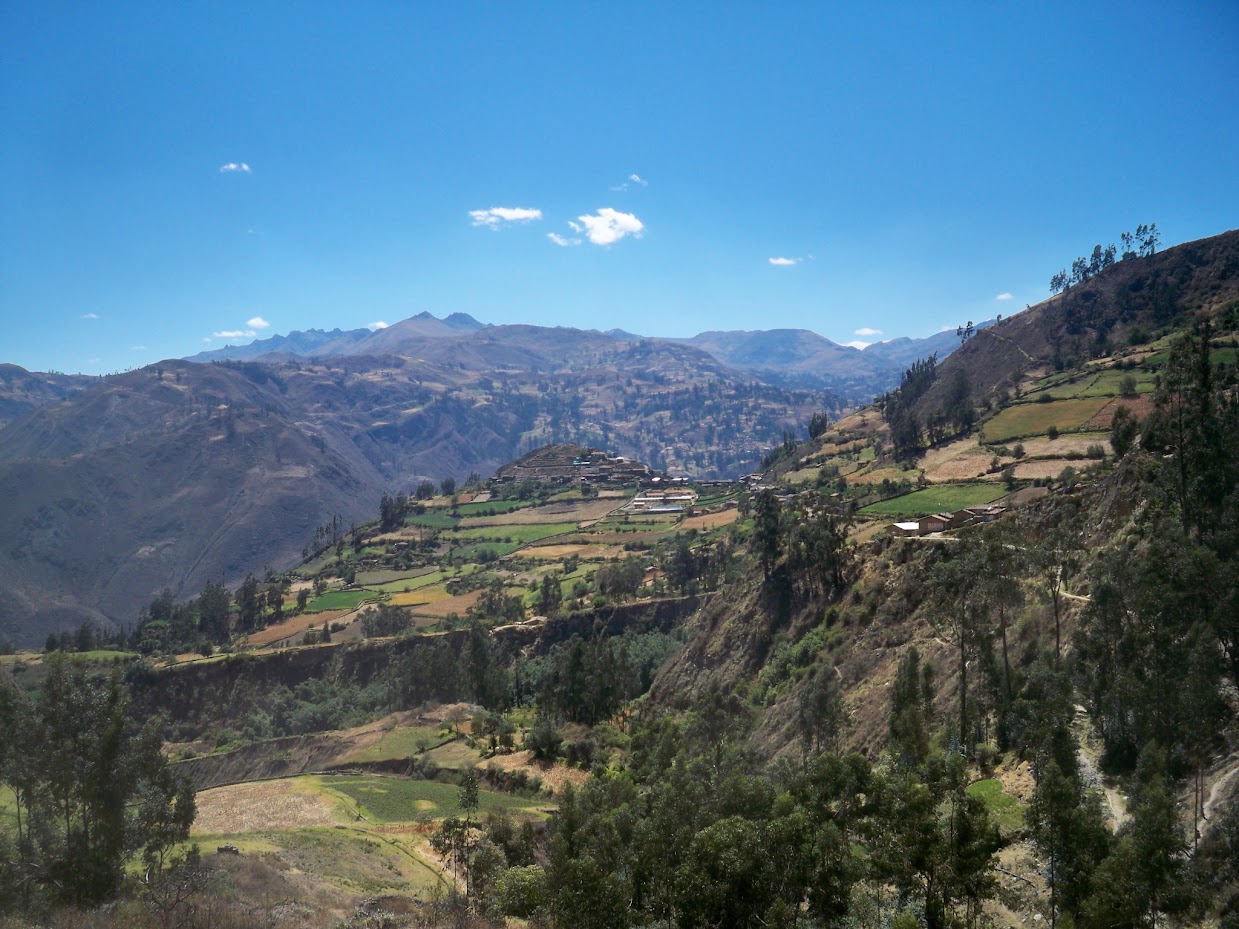 A half hour chat with Lopez covered everything from corruption to religion (my Spanish was on remarkably good form), and then I was on my way again. This next section, I hadn’t really thought about, and in fact, turned out to be harder work. 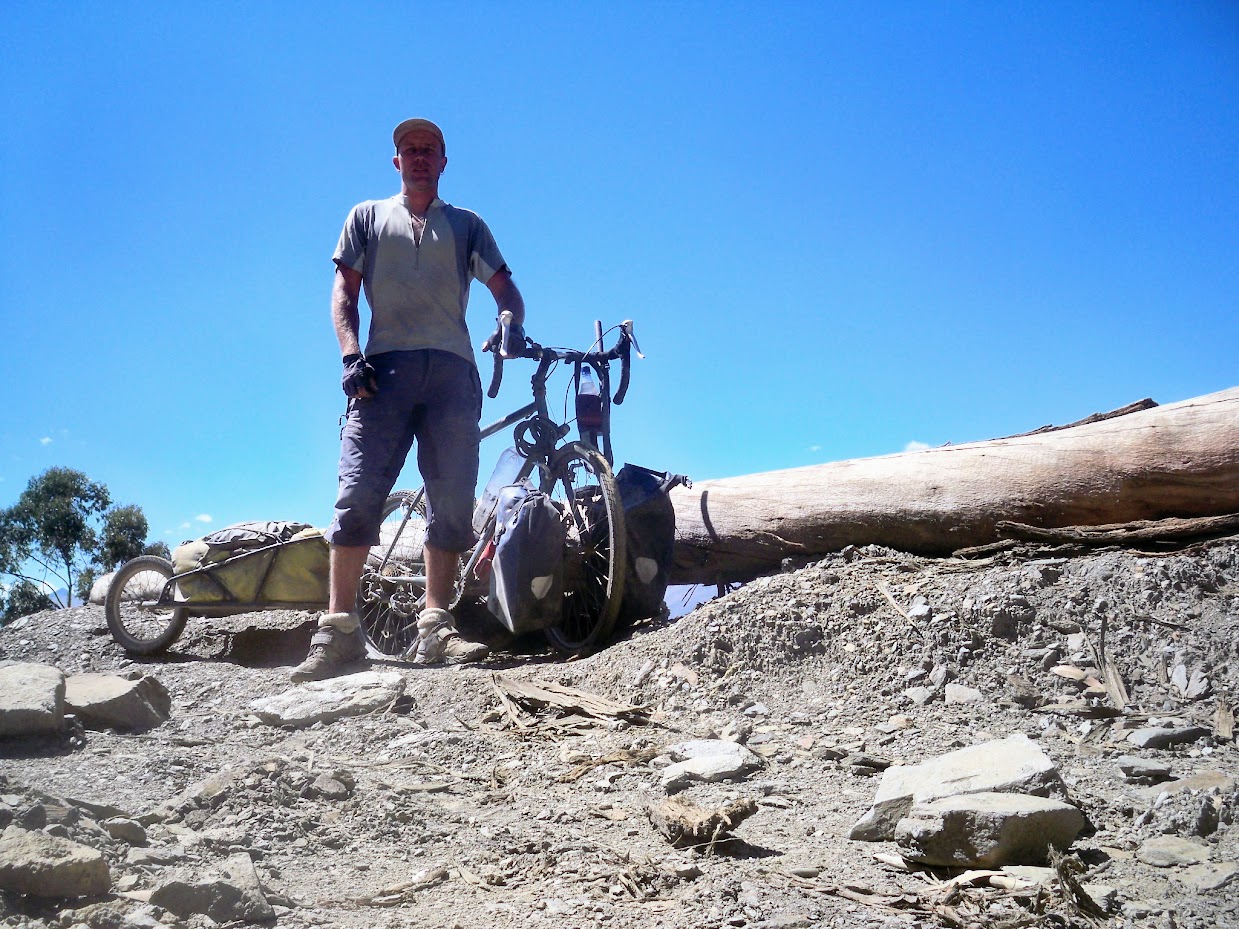 Some of the gradients were terrible on the way to Pallasca, but after stopping for a half hour noodle break, I finally cracked it out, and reached Pallasca for 14.00. Six hours including 1.5 hours for breaks was pretty good going I thought. 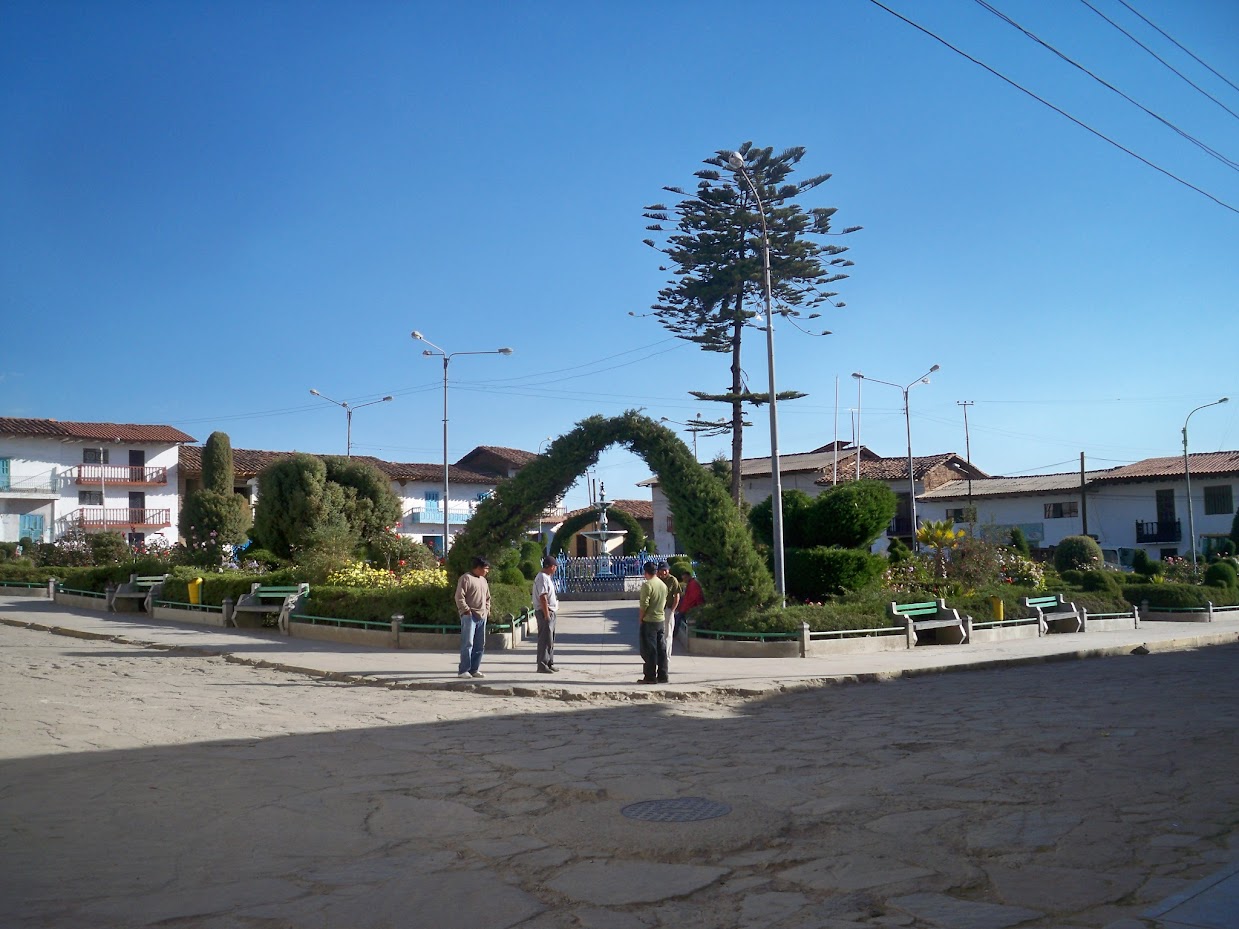 The hotel on the plaza in Pallasca was just 10 soles a night, which was a bargain, and so I dived in. Washed (cold water, as electricity was off in town), I went for a wander, and decided to have a beer in one of the shops ringing the plaza. 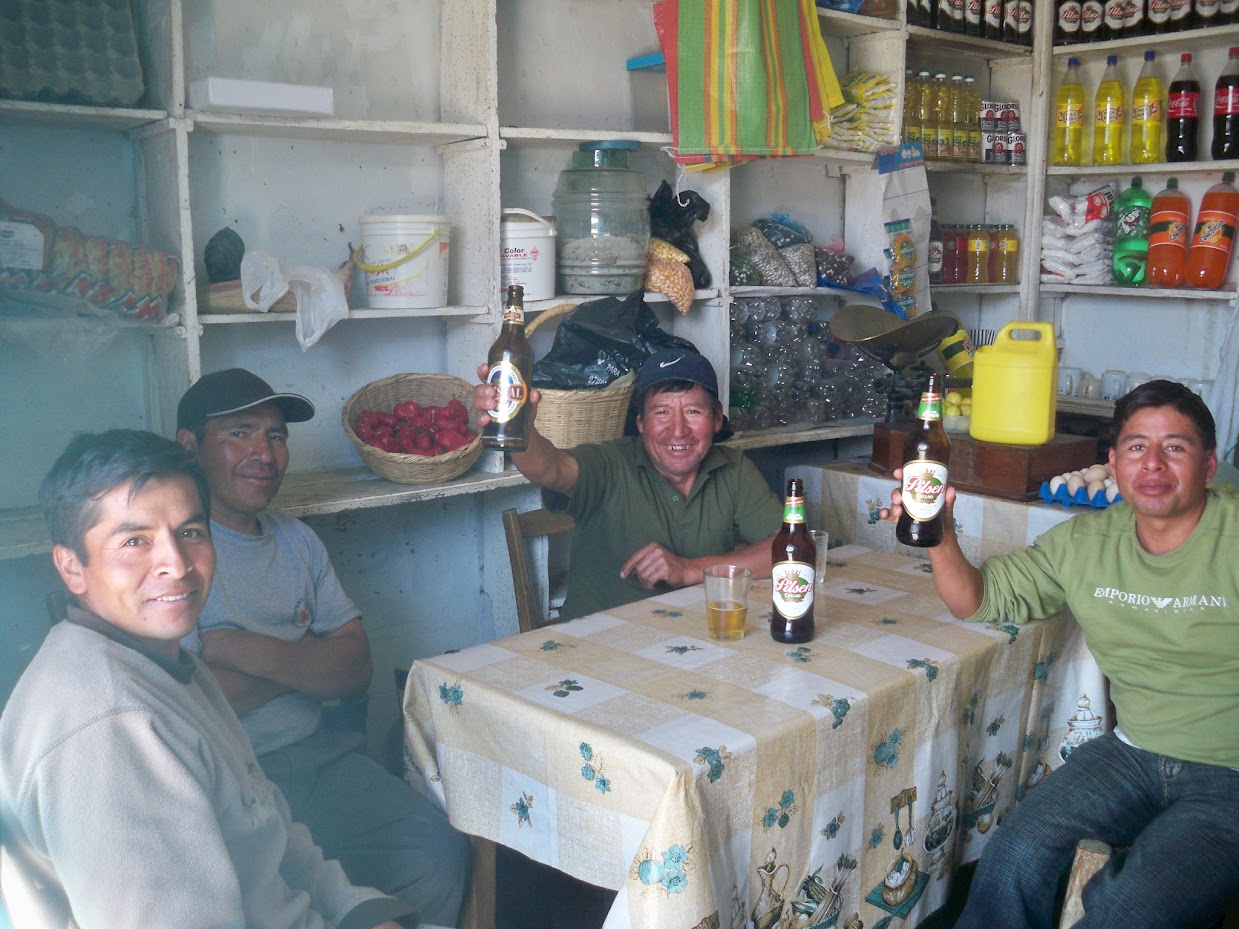 A group of guys was already in there drinking, so conversation came easily as we passed the glass and beer around.

Pallasca seems like a nice village, and what with the room being cheap, a day off here is well in order !