A few bicycle repairs, and then I cycled from Patacamaya to a wild camping spot near Oruro in Bolivia. A day in the life of a bike tour in Bolivia!

A pretty good night's sleep, and after a bread an jam breakfast, I asked around to see if there was a bicycle shop that I could buy a rear rack for touring from. As it happened, there was, so I cycled over to see what they had.

The racks looked reasonably strong, and as the panniers that will go on them were originally front ones, and wont carry much weight, the one I chose should do the trick. I'll still be towing the trailer of course – maybe I'm carrying too much stuff?

Whilst he was fitting it, I took a closer look at the rear wheel. In places, it was becoming dangerously close to cracking, so I decided that I might as well get a new rear wheel as well whilst I was there.

A new back wheel

There was a pretty robust looking Chinese job there, so I decided to buy it. It was a 36 spoke hole, and the wheel I had on the back was a 32 hole, but delving into my seemingly bottomless bag of spare parts, I dug out a decent 36 hole rear hub.

(For regular readers, I had been carrying this for over a year, from when a tree fell on my bike in Standish Hickey campground in the USA. The wheel had been a write off, but the hub was ok). 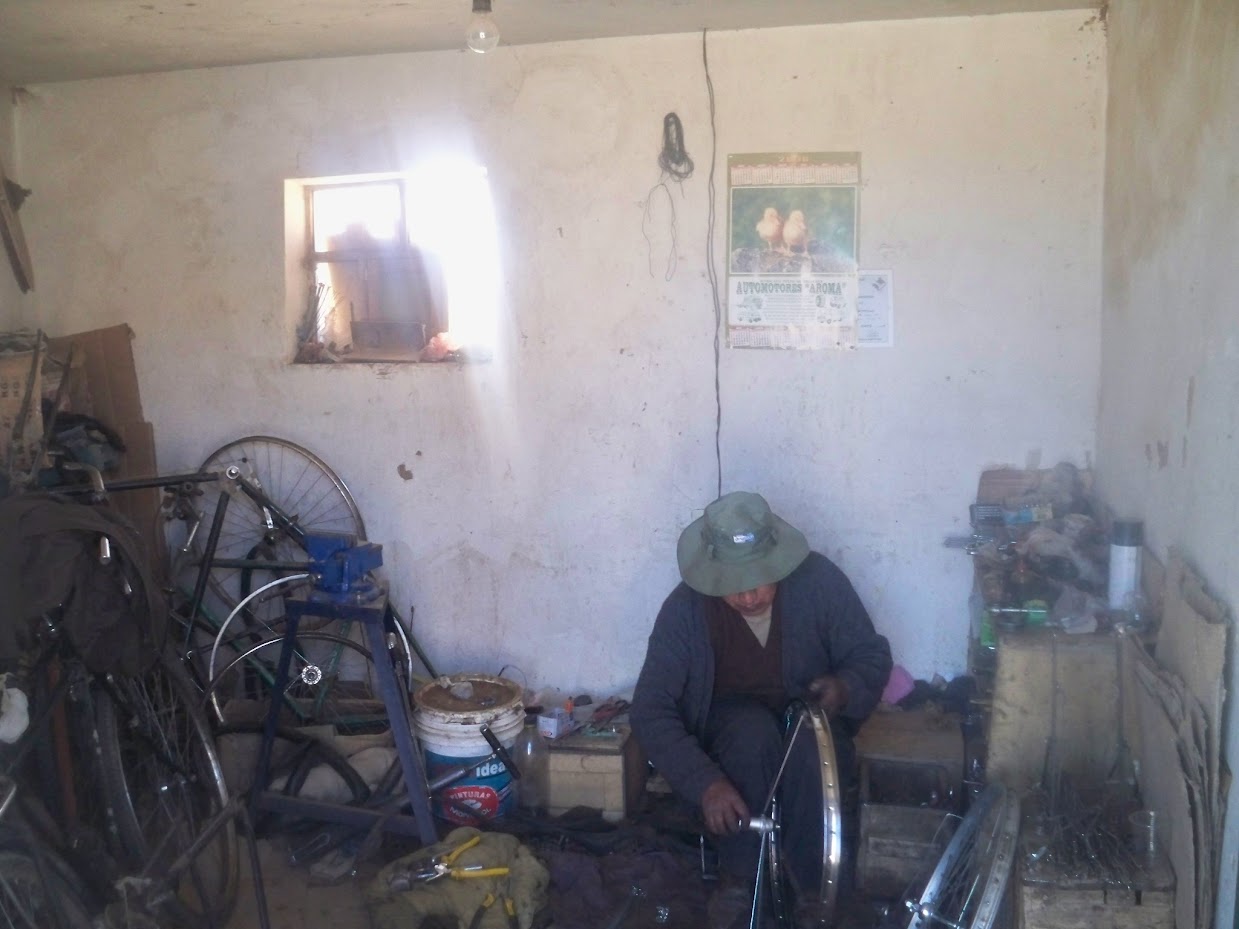 As the guy built my wheel for me, we had a chat about Bolivia and the world. As we spoke, I could detect an undercurrent of “blame the western world for everything” rhetoric.

I’m certainly not suggesting that the developed western societies are blameless in the current balance of the world economy, but at some point, countries like Bolivia or Malawi have to ask questions such as how they have progressed so little after independence.

And the answer, more often than not, is internal corruption.

The chap in the bike shops main beef, seemed to be that Bolivia didn’t manufacture anything, and that it was the west's fault for taking all the raw materials and minerals away.

My answer was to ask his government why! (The answer will lay in hefty bribes somewhere down the line).

Whilst in Bolivia, I have noticed a certain amount of the people not wanting foreigners there. A lot of this has to do with Chavez up in Venezuela, without a doubt. Anyway, that’s enough of all that for now!

With the wheel built and fitted (with a spare cassette I also happened to be carrying), I strapped the old wheel onto the back of the trailer and headed off.

Leaving at 12.00, and with 120 km to cover to get to Oruro, it was always going to be unlikely that I would get there that day. I raced along, but even though I could see the city lights, it was too dark to continue, so I pulled over at 19.00 and wild camped off the road. Cooking in the dark is not easy!!