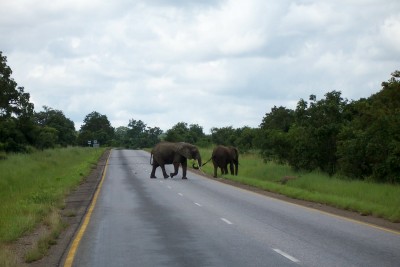 Bikepacking route and distance between Dar Es Salaam and Mbeya

You can take a look at the cycling route I took from Dar Es Salaam to Mbeya in this map. The distance was about 187 kms, and involved cycling through a protected area where I saw elephants and giraffes crossing the road in front of me!

Note: These blog posts were written in 2007, and then reformatted in 2022. The content remains the same.

I took the bike out for half hour in the morning to give it a test run, and everything seemed fine, which was a huge relief, as it meant that I could finally get going again.

Back on the bike at last. It was good to get reacquainted with the road, although I must say, I hadn't missed the feeling of having my nadgers being squashed against a hard bicycle seat.

Today's distance was 109 kms, which was basically a retracing of my route from Dar back to the town of Chalinze.

An uneventful ride, although the last 30kms felt like hard work, which was due to a combination of climbing back up from sea level and having done no exercise for 10 days.

I stopped every now and again to test the tyres, but this was more out of force of habit than anything else, and the tyres are fine.

Found a restaurant in Chalinze which did a buffet for 5000 shillings, which was good vale. There was a guest house next door, so I dived in there.  Buffet for dinner. Red Dwarf. Bed.

I was heading in a westwards direction again today, which is nice, because it meant that my face was in the shade. If I do another cycling trip, I'll have to make sure I go from east to west!

Spent the day cycling steadily uphill, but it was nothing I hadn't seen before. There was one ‘Holy Shit' moment, when I cycled over the less dangerous end of a snake that was wriggling across the road. I've got further to cycle tomorrow, so an  early night for me.

I think today was one of the highlights of my trip so far. There was an uneventful first 40 kms, and then, after leaving a policeman blathering something about lions at a roadblock, I entered Mikumi National Park.

I didn't really expect to see anything, but as it turned out, I saw almost everything that people pay big bucks to go on safari to see, only I did it for free. Result !

The only exception, was that I didn't get to see any lions, but given that I was on a bicycle, it was probably for the best.

First up, were some wild boar and antelopes, but they were too fast for me to take any photos. Then, on a quiet stretch of road with no traffic, some elephants decided to cross right in front of me.

Because they had some babies with them, I decided to give them plenty of room, as I didn't really fancy being on the receiving end of a three tonne elephant charging at me.

I got some photos though, and also took this short video clip – Elephant Video. It was a pretty special encounter, and it put a huge grin on my face for the rest of the day!

Then, ten minutes later, a herd of giraffe over to my left obviously thought that I was some sort of strange, two wheeled predator, as they got spooked, and started running en-masse ahead of me. 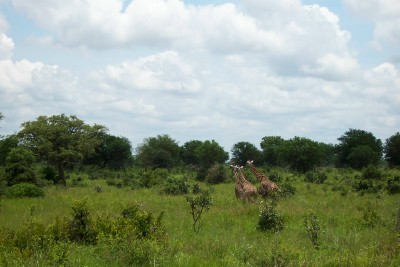 They were pretty fast too, as I could barely keep pace with them on the old velocipede! I managed to get some video footage of that too, but until I find some way of editing it, it's not good enough quality to put online.

Giraffes look quite strange as they run, with their huge long necks. They almost look as though they are swimming elegantly through the air. After that, it was baboons, zebra and water buffalo. So, all in all, a pretty cool day!

I initially thought that today was going to be a weird one, but once I'd shaken off the chain smoking midget on a bicycle who was tailing me out of Mikumi, it settled down.

The first hour was steadily uphill, but then came an excellent hour of downhill, through the mountains and into a valley. After that, it was a rolling road leading steadily uphill through some mountain range that if i had a decent map I would be able to name.

I switched my brain off when it started raining, and at about three, I found a service station complex which also had cheap rooms. Despite today being physically very hard work, I am in a much better frame of mind since leaving Dar Es Salaam, and enjoyed today's cycling.

I must say, that I was expecting some downhill today, but it just never came. On leaving the complex, a monstrous climb began, which lasted for well over an hour on very steep roads.

Still, without the bicycle problems that have plagued me since leaving Sudan, and the general abuse of Ethiopia, it was quite enjoyable all the same.

It was hard work of course, but this is why I chose to do a bicycle trip, so that I could push myself physically and see what I am capable of.

As I'm quite high up now, and further from the sea, the humidity has all but disappeared, and the heat is noticeably lower.

The surroundings are lush and green as there has been quite a lot of rainfall over the last few days, and the main rivers are full and fast flowing. All in all, the landscape is pretty stunning.

The day continued ever upwards until I reached the town of Iringa, where I had planned to spend the night. The main road didn't actually go through the town itself though, and before I knew it, I had gone past. Oh well.

I continued along the road for another 20 kms, and reached what can only be described as a squalid little settlement. It was two o'clock, the rain clouds were drawing in, and so I decided to stay in the guest house, where I can only assume I was the first mzungu to ever stay there.

This town has to have the lowest prices for daily goods in Tanzania, which is saying something, as Tanzania is ridiculously cheap anyway.

My legs were aching quite a lot, but I've done a lot of mileage over the last few days. I've now been on the road for eight months since starting the bike tour in England – Doesn't time fly when you are having fun!

I had a really good nights sleep, and got off to an earlyish start. The previous evenings rains had reduced the temperature somewhat, and for the first hour, it was actually a bit nippy, which felt good.

More rolling roads, although not as severe as yesterday.

At one, the rain clouds were getting a bit close, so I stopped off in the settlement of Sao Hill, which mad Tanangozi look positively quaint and charming!

I felt pretty strong all day, and this combined with a couple of good downhill sections helped me to cover over 150 kms today. Along the way, I met two Dutch cyclists coming from the opposite direction.

These are the first cyclists I've met on the road itself since meeting Leo in Egypt I think. They had started in Holland, and have cycled down the west coast of Africa, and are now making their way northwards up the east side. Oh, to have the cash to do that!!

Their site is at www.worldbiker.whereareyou.net. They had a very professional, laminated card too, which is something I will definitely get sorted out for my next trip, which I've all but decided is going to be cycling from Alaska to Argentina.

Back to this trip though – I stopped the night in what I assume to be the town of Igawa, but my map is not all that good, so it might somewhere else.

The guest house is typical, in that it has  bucket shower, although I didn't have to get water from a well today, and squat toilet. The main problem with squat toilets, is that the mossies wait until you have your kegs down, and then launch their attacks. Bastards.

I don't think the town I was in last night was called Igawa, it may have been Chimala… Oh well, doesn't make THAT much difference to you, avid reader, does it??

Pretty hard work today, as the roads were deceptively and not so deceptively up mountains all day.

Reached Mbeya for lunchtime though, and because I've had a few cheap days, I've splurged out on a nice hotel… Ah, a toilet I can sit down on, and not a hole in the ground!! On to Malawi tomorrow.