After spending Christmas and New Year in Salta, it was time to resume the bike tour once more. Today's destination was La Vina in Argentina.

After quite a long time out in Salta, it was finally time to leave! The New Years there had been pretty interesting, but on the whole I had spent much of my time doing yet more freelance writing work. It wasn’t as busy as I had hoped that I would have been, but then again it was the holiday period.

Talking of which, this time of year, from about a week before Christmas to the end of February is the Argentinean holiday season. Most of the student population seems to be putting on a back pack and traveling around the country. Add into the mix families on holiday as well, and everywhere just seems heaving with tourists!

So, cycling from Salta was through a little traffic, underneath a refreshingly overcast sky. However, the sky grew darker, and soon it was raining. And not just normal rain either, I am talking biblical proportions here!

Sections of the road became flooded, and I took shelter several times to sit out the worst of the downpours. 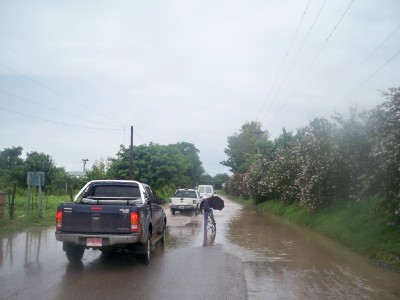 Even when the rain had abated a bit, the roads were still flooded in places, and when I went to cycle through them, it literally came up to the hubs of my wheels – That’s pretty damned deep! 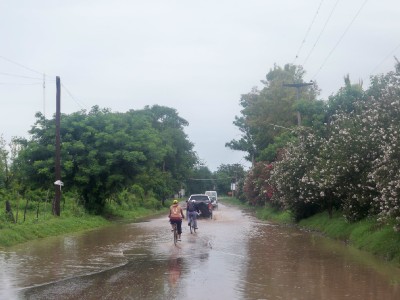 Luckily, I was wearing my waterproof clothes that I had been carrying around since cycling in Colombia.

Now, in these eyes of most cycle tourists, these are something to be sneered at. They are heavy and not breathable. They are not Gortex, and they cost just a few dollars rather than several hundred.

Well, in these conditions, they were just about perfect! In fact, the shoe covers were awesome, and when I was kitted out, I was cycling through all these deep sections of water with no issue at all. Try that in your Gortex gear!

The rain eventually stopped, the roads cleared a little of water and I continued on. I had spent a couple of hours sitting some of the heavier rain out, and so I didn’t get as far as I wished.

Still, 80kms is still reasonably respectable, especially after a month of inactivity. I reached the junction town of La Vina, and asked at the petrol station where I could camp for the night.

As it turned out, I could camp there for free. Thanks! That meant I could treat myself to a family sized pizza and a beer!