On today's leg of the Alaska to Argentina bike ride, I cycled from El Capitan to Santa Barbara in the USA. Once at my destination, I met up with Anne from a couple of days ago.

Not a spectacular night's sleep, due to the Highway being close by. A consequence of this, was that I was up and about early, and away before most other people began stirring… Oh damn, I forgot to pay that 10 bucks!!

The road to Santa Barbara was far easier than I expected, as was finding the hostel. Once I was booked in, I went for a wander around the town.

I have to say that the homeless population is both incredibly visible, and a stark contrast to the obvious affluence that surrounds them.

The lack of a ‘social safety net’ is a huge shame for such a big country. The other side of the coin, of course, is that the transient population gravitates to both the warmer climate, and the richer cities.

Anyhow, leaving all that aside, I met up with Anne and her friend Cookie in a pub for a few drinks, where it felt good to act civilised for a change – Well, as civilised as I can get. I hope that offer to help sail the boat still holds Anne!! 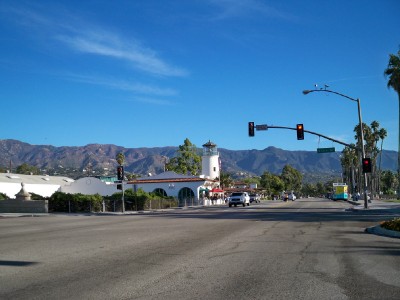