Last Updated On September 8, 2020 by Dave Briggs Leave a Comment

Athens is a kaleidoscope city, where ancient ruins mix with modern sprawl. Perfect for urban explorers, here's how to dive into alternative Athens and what to look for. 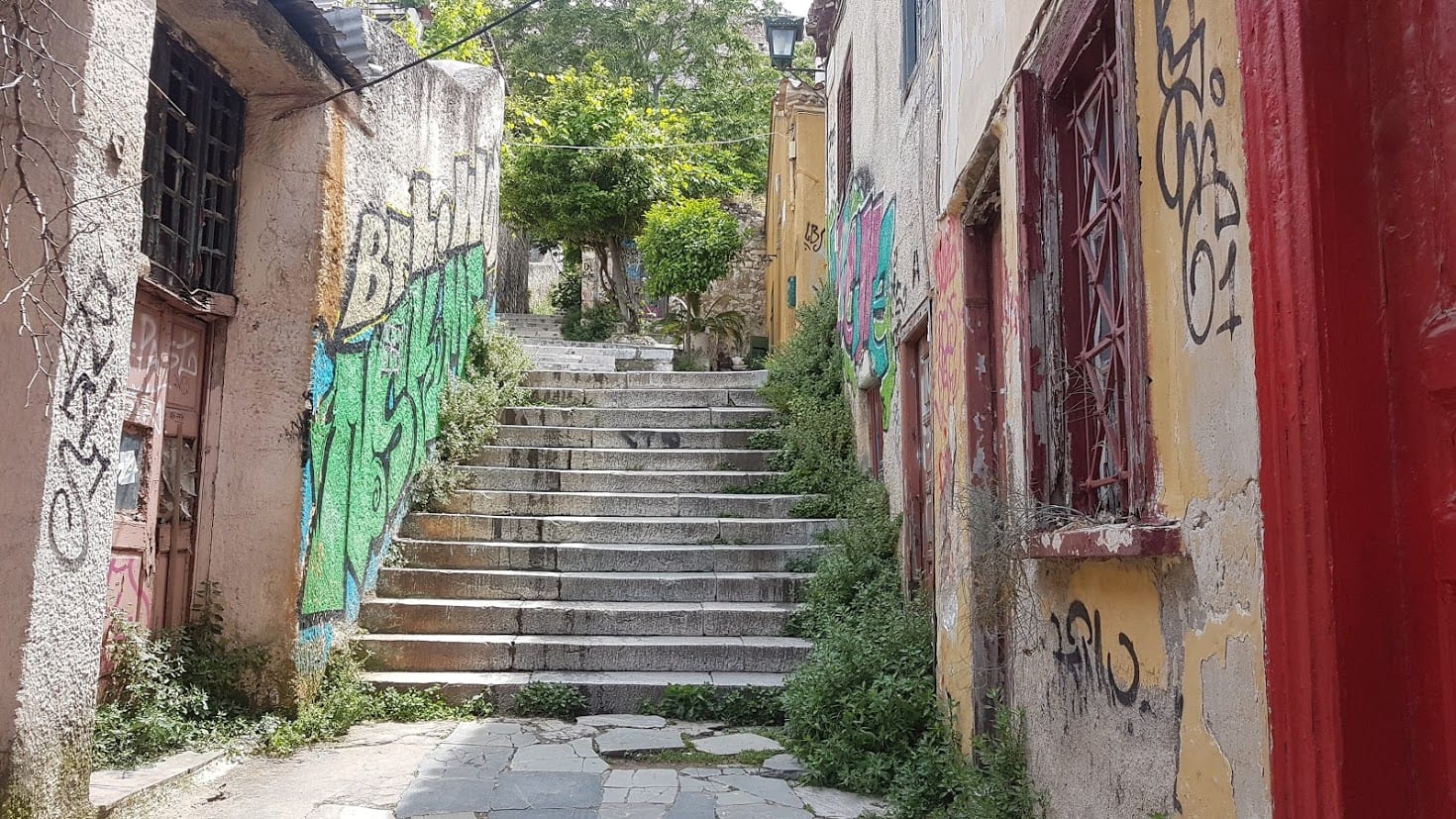 A different side to Athens is waiting

When most people think about Athens, the first thing that comes to mind is the Acropolis and ancient monuments. Others might think of the popular Plaka neighborhood and the maze of cobbled little streets.

What greets them on arrival, is an often chaotic city, especially outside the historic centre. Mix in the traffic, noise, and spray-painted walls, and it can come as a shock to some.

Others though, embrace the chance to dive deeper into the Greek capital, and take a look underneath the surface. Welcome, to alternative Athens!

Ask any Athenian what they mean by “alternative side of Athens”, and you are likely to get a few different answers.

Some people will talk about the seemingly never-ending street art, to which many Athenians are rather used to and perhaps even fond of, as opposed to many visitors.

It’s true that graffiti and street art can be seen pretty much everywhere in the city. Some of the biggest artworks cover whole blocks of flats, and it's not always been commissioned.

For some tourists this makes the city look dirty and shabby. Locals might argue that it adds character and charm – well some of them at least!

To others, “alternative Athens” describes controversial areas like Exarcheia, where residents have created informal groups organizing independent events such as gigs, Greek classes, communal cooking etc. Exarcheia has also been linked with anarchy, political activism, the odd riot and, in the past few years, refugee squats.

It is an area where you can visit the National Archaeological Museum as well as the amazing Polytechnic University building – but you can always grab a beer and mingle with people instead.

At the same time, it is quite common to come across drug users, and even drug sellers. It gives Exarcheia an edgy feel, that can generate a mix of fascination with the uncomfortable.

Off the beaten track Athens

To me though, alternative Athens for tourists is more about getting away from the regular attractions (of which Exarchia is arguably becoming one!), and getting out into the neighborhoods of Athens that barely get a mention.

For example, if you don’t want to hike all the way up the popular Lycabettus hill, you can go to Strefi Hill instead. Just off Exarcheia, this hill is great for views, but it’s much less popular and therefore much less crowded. Hike up and enjoy the fresh air and cool vistas.

When it comes to “hidden gems”, many Athenians would mention upcoming neighborhoods such as Pagrati, which is at the back of the Panathenaic Stadium. Pagrati isn’t too popular with tourists, unless they happen to be staying there, but it’s got plenty of restaurants and café-bars frequented by young people, offering a lot of choice for an evening out.

At the same time, even the more popular areas of Monastiraki and Psirri have well-hidden secrets. Picture cute coffee places, great street food options, cool terraces with a view to the Acropolis and vintage record stores. The street art is pretty impressive too.

Try taking a private tour in Athens, and a local can show you where even more hidden gems are.

Another local place that most visitors love is the Varvakios food market, divided in several sections. Here you can taste some olives and other goodies, and possibly buy some fruit and snacks to take to your hotel. You can also get some  souvenirs for back home, such as olives, olive oil, herbs and spices.

Nearby, you can also visit the area of Metaxourgio. Once a part of the town dominated by a large silk factory, Metaxourgio was a workers’ settlement.

When the silk factory closed down, the people who remained in the area had to find other means to support their families.

Today, Metaxourgio is full of places to eat and drink, interspersed with a few art galleries. There's also an unofficial red light district, although with white lights. Go figure.

I've got a couple of Athens itineraries such as my 3 days in Athens itinerary which scratch the surface of alternative Athens. If you want to really get a taste for it though, private tours in Athens with a local are the way to go.

They'll be able to take you to the latest hip and happening place, show you freshly sprayed street art, and even better, you get to chat with a local as well!

Interested in more alternative things to do in Greece? Take a look at the Free and Real Greece project for more!

Plan Your Trip to Athens here

Would you like to find out more about Athens and Greece? Sign up for my free travel guides below. I'll send you all the information you need to plan a perfect vacation in Greece!

Pin this guide to Alternative Athens for later

Please use the image below, and add it to one of your Athens or Greece travel boards on Pinterest. This way, you can easily find it for later. 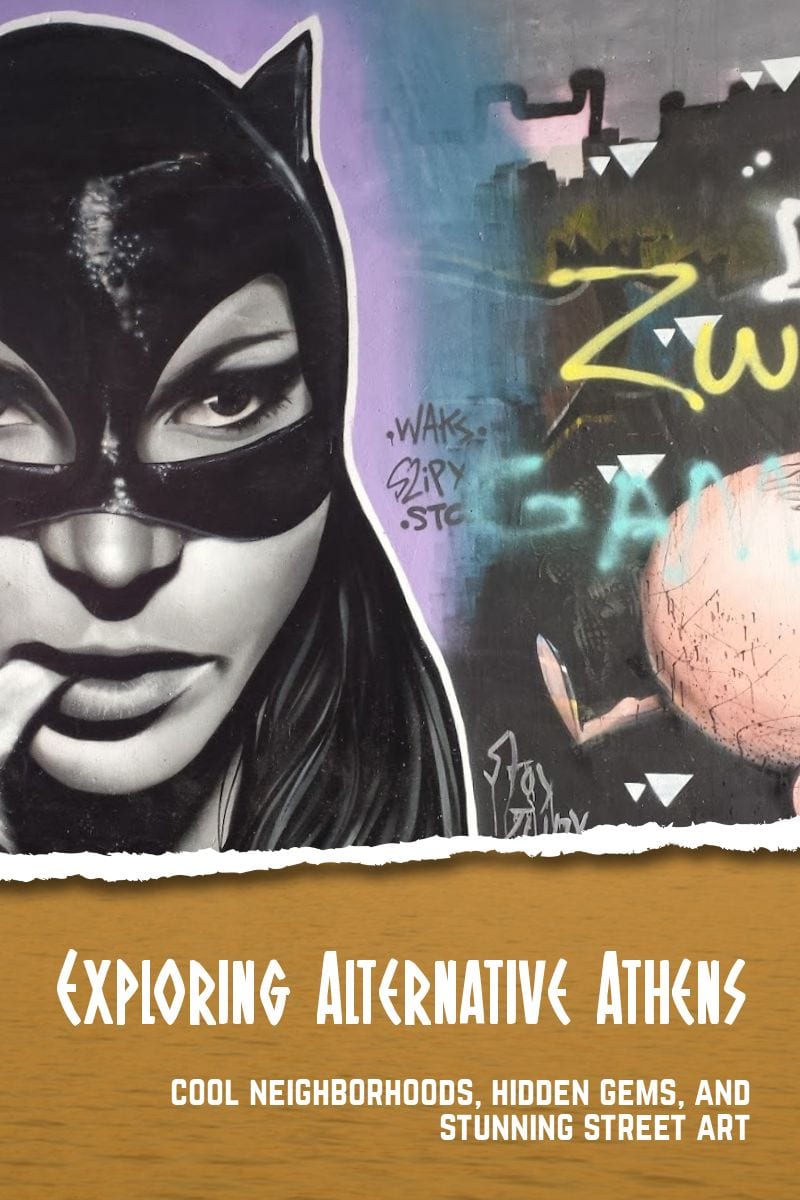