Was I one of the world's first digital nomads in Bolivia? In 2010 I might well have been, as I worked online during my bike tour from Alaska to Argentina. 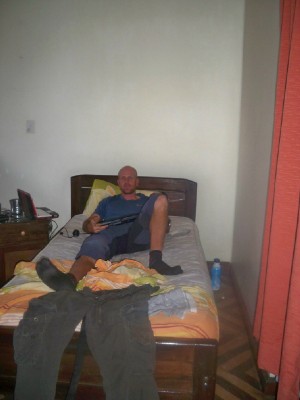 Firstly, I must apologise for not keeping the travelogue site up to date whilst i have been doing some freelance writing. That said, there hasn’t been a great deal to report!

I have been in Tupiza, Bolivia where I have been doing some freelance writing work in order to bring some cash in. It has actually gone remarkably well in terms of contracts and money, but, well, it IS a bit boring staying in one place for this long!

I started doing freelance work through a site called Freelancer. I have found a niche in writing web content and promotional articles. It seems there is a lack of skilled writers out there (and let’s face it, if I managed to get work ANYONE can!).

Some of the contracts have been quite nice, and I have been averaging 50 dollars a day income. This may not seem a lot, but when you consider that I am only spending 15 dollars a day, it is worth it!

In addition, I am my own boss, can work in my pants and watch TV at the same time!

I am hoping to carry at least one of my regular contracts over so that I can do it whilst cycling, which is kind of the best of both worlds.

As it is, I will be here in Tupiza until about the 10th of December, and then it will be head down as I cycle as far south into Argentina as I can before Christmas.

An intriguing offer to help someone sail from Thailand to the Med came in… Not sure how realistic that is, but how awesome would that be!! Still, that’s in the future, and I have some work to do!!Until later….Dave