During my bike tour from Alaska to Argentina, I took an extended break in Tupiza Bolivia in order to do some online work. Then, it was time to move on again.

Yes, it is official… I am leaving Tupiza at last!! I figure that I have been here for nearly two months now, which is quite amazing, as that is longer than I have lived in some houses back in England!

During that time I have managed to earn a bit of money by doing some freelance writing work. My bank account is now back up from zero to a grand, and I can’t tell you how great that feels!!

Related: How to support yourself when traveling

Working online during a bike tour

The work has been through one website, and what actually happened, was that three of the clients extended my work past the original projects.

It was a bit concerning at first as to if people would pay out or not, but so far everything has been great. They also want me to continue working, so now, I have to work out the best way of slotting it in around the cycling.

If I can, then there is the possibility that I extend the trip beyond finishing in Ushuai, Argentina in March 2011, and continue on to Rio in Brazil. Of course, that is a bit far off yet… Let’s get this trip done to Ushuai first!!

So, my first port of call will be the large northern city of Salta in Argentina, a place I hope to reach just before Christmas if I can. I would like to base myself there for two weeks, getting both Christmas and New Years out of the way, and hopefully earning some more cash in the process.

Of course this does now involve cycling!! I have to say, that I will be leaving with a mix of excitement and nervousness. During this last two months I have done virtually no exercise, and getting back on the bike again could be a challenge!! The excitement though, is that I feel recharged and ready to get some distance done! 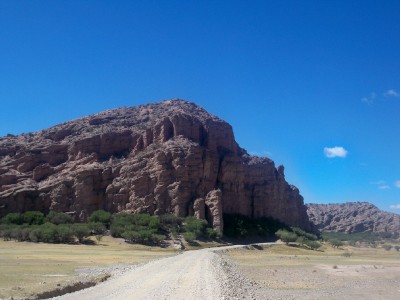 Whilst in Tupiza, I have also bought some new clothes – trousers, T-shirt and socks. Somehow, I forgot to buy any new underwear though, and I still have only the one pair, that have been with me since Mexico. I would take a picture of them, but taste prevents me (today at least!).

In addition, I bought a 10 pound sleeping bag, as my original sleeping bag is ripped, the zip doesn’t work, and it whiffs a bit. I am hoping that it will be warm enough for me to dump the blanket that I bought as well.

In terms of the bike, I have given it a check over. The rear wheel (that I bought for about 10 dollars) is showing signs of rust on the inside. Not the greatest news, but let’s face facts, it’s certainly not the worst thing that’s happened!

So, Monday the 13th December I resume my journey southward and my next big city is Salta. A big thank you to everyone who kept returning to the site, even though I haven’t exactly had a lot to write about recently!!