Leaving Ixtapa, I had to get used to my bicycle not changing gear correctly as I cycled to Papanoa in Mexico. Part of my Pan American bike tour.

The two handed gear changing technique works, which is just as well, because it goes without saying that life would be difficult otherwise!

The only other problem that I had today, was that my rear quick release somehow came open as I was riding along. Luckily I noticed it before anything bad happened though. 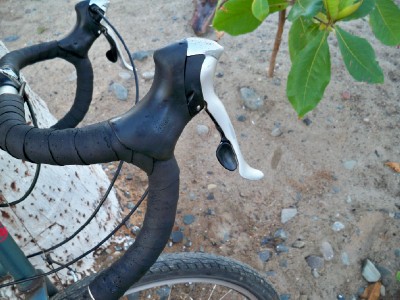 Where am I cycling?

The cycling seemed a bit of a chore today, and it was hot as usual at 30 degrees, although humidity was down to 66%, which was nice. I also seemed to have messed up where I was heading for today., in part due to my inadequate maps, but mostly due to bad research.

In my mind I was heading to San Marcos…. The only problem being, that’s about four days away! I think I need to get my bike touring navigation under control!

Instead, I stopped at Papanoa, in another 200 peso hotel. If my bike touring budget wasn’t so tight, it wouldn’t be a problem, but it's starting to hurt a little now!

Jeez – I just read that back and it sounds a bit negative… need to get in a better frame of mind!