My bike touring blog post from cycling between Jaco and Quepos in Costa Rica. Part of my larger bike tour from Alaska to Argentina.

Cycling after a rainy night

It did rain during the night, but it wasn't a heavy torrential downpour, and the tent stayed nice and dry.

My clothes were still a bit damp from the previous day though, so I decided to have breakfast in a restaurant and give them an extra hour to dry.

A lot of people don't seem to rate Costa Rican food, but a breakfast of pintos (rice and beans), with scrambled eggs and some fruit on the side does just the job. 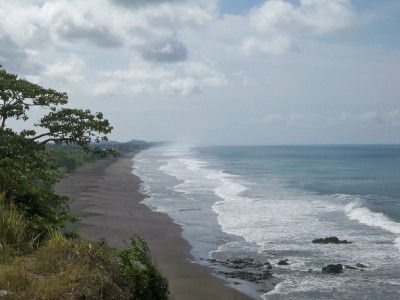 On the road, and I initially passed some stunning coastline, which in some way explains why so many Americans are choosing to retire here.

They seem to be a younger crowd than the ones in Mexico. Late forties and on. I still don't quite see the appeal of living in a condo, crammed on an estate with other condos though.

The road was agreeably unstrenuous, and I pulled into the town of Quepos where I soon found a hotel.

5000 Colones (10 dollars) is the going rate for a single room in both Costa Rica and most of central america.

In the evening, I fixed a puncture in the Bob tyre – Do I know how to live or what !!